Over 1 Million Units Sold During Diwali in India

SHENZHEN, China, Nov. 13, 2018 /CNW/ -- Honor, the young, innovative and trendsetting smartphone e-brand for digital natives, announced today the brand was the top Singles' Day performer in terms of sales volume and revenue under the Smartphone category on both Tmall.com and JD.com, the two biggest e-commerce platforms in China. The success represents the 3rd consecutive year of Honor's sales supremacy during this festive season.[2] 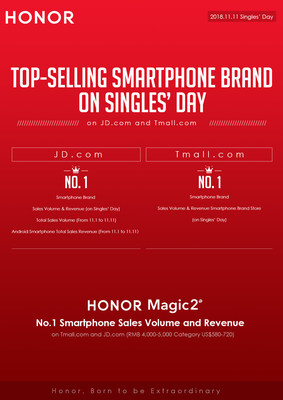 Moreover, the recently launched Honor Magic2 was another strong sales performer. It was the best-selling smartphone in terms of sales volume and revenue in RMB 4,000-5,000 range (US$580-720) at Tmall.com and JD.com.

Meanwhile in India, over one million units of Honor products were sold during the Diwali promotional period, a 300% YoY increase from 2017. The most popular products included Honor 9N, which became the Star Product on Flipkart's Big Billion Days; and the recently launched Honor 8X, which became the Best Seller on Amazon India on the first selling day.

George Zhao, President of Honor, commented: "I'm thrilled that Honor achieved these unbeatable results even under what has become a tough situation for the global smartphone industry. Global smartphone shipments in Q3 2018 represented a 6% YoY decline, the Chinese smartphone market is also declining and was down 11% in the first half of 2018. Our strategy and undiminished efforts in R&D have ensured Honor bucked this global trend, especially in key areas of smartphone technology innovation such as AI, GPU Turbo, and our excellence in smartphone design."

With Black Friday and the Christmas season arriving soon, Honor will roll out more promotional festive deals in its global markets and share its success with Honor fans all over the world.

Honor is a leading smartphone e-brand under the Huawei Group. In line with its slogan, "For the Brave", the brand was created to meet the needs of digital natives through internet-optimized products that offer superior user experiences, inspire action, foster creativity and empower the young to achieve their dreams. In doing this, Honor has set itself apart by showcasing its own bravery to do things differently and to take the steps needed to usher in the latest technologies and innovations for its customers.

For more information, please visit Honor online at www.hihonor.com or follow us on: