TORONTO, Nov. 7, 2017 /CNW/ - The Hereford and Shorthorn breeds came out on top on November 5th at the 95th Royal Winter Agricultural Fair in the culminating event of the Masterfeeds Canadian Beef Show – the Masterfeeds Supreme Beef Champion. In the female class, the winner was JDL Janice 11X 119C owned by Grosvenor Farm and JDL Cattle Company of Shelburne, ON.  Supreme Bull was Hill Haven Fire Storm 28C owned by Dale Asser and Bob Meldrum of Hill Haven Shorthorns in Duntroon, ON. Each of the winning exhibitors received a banner and a cheque for $2500 from Masterfeeds, along with the honour of being the 2017 Supreme Champion. 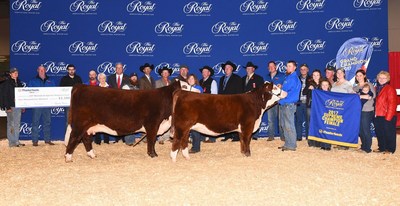 The Masterfeeds Supreme Beef Class had a new twist this year. Supreme Champions from eight regional and county fairs were invited to send their champions to The Royal, including Beachburg, Barrie, Peterborough, Teeswater, Renfrew, Carp, Erin and Expo Boeuf. No matter where they placed in The Royal's show, these regional Supremes were eligible to compete in the Masterfeeds Supreme Beef Class.

JDL Janice co-owner Shirley Lasby was nearly speechless after her entry was named Supreme Beef Champion Female.  JDL Janice was invited into the Supreme competition because she was Supreme Champion at the Erin Fall Fair. "We love what we do and that's why we do it," says Shirley Lasby's daughter Jessica. "I don't have words to describe this win." She says her family has never missed a Royal and they will certainly be back next year. Having the 2017 Supreme Female proves that their breeding program is on a winning track.

In the Supreme Bull Championship, Hill Haven Fire Storm 28C proved he deserved the designation. The bull was not only the Grand Champion of The Royal's Shorthorn breed classes, but he was also invited to The Royal because he was Supreme at the Erin Fall Fair.

"The Royal a leading and prestigious beef show in Canada," says Rob Flack, CEO of Masterfeeds, an Alltech company, the presenting sponsor of the event. "We witnessed the best of the best in this year's Supreme Class – a very exciting event. The Royal is a great showcase for Canadian agriculture. We are proud to be part of it."

"Including Supreme Champions from other fairs really added an extra element to our competition this year," says Charlie Johnstone, CEO at The Royal. "The Royal is the ultimate show for these Fairs and it was great to have those Champions in the Ring."

The Royal is supported in part by the Province of Ontario and City of Toronto.