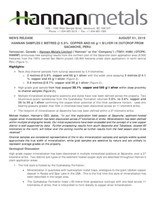 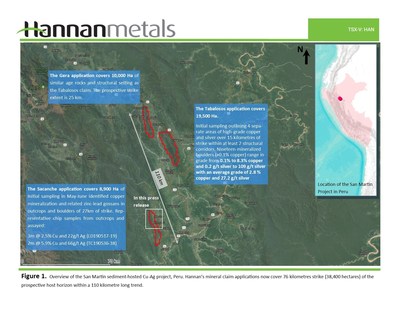 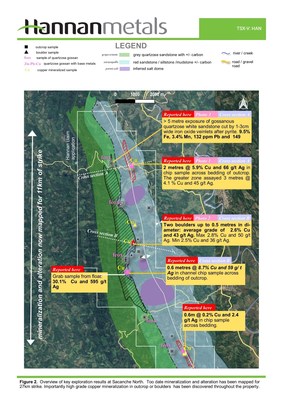 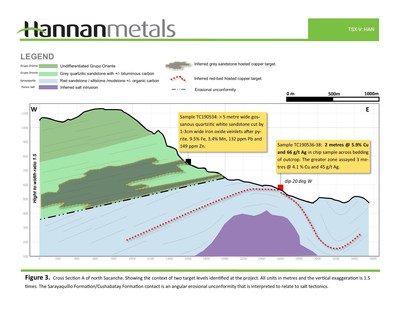 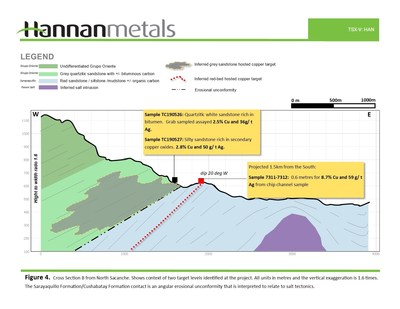 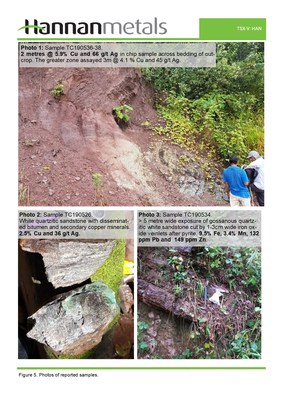 Michael Hudson, Hannan's CEO, states, "In our first exploration field season at Sacanche, sediment-hosted copper-silver mineralization has been discovered across 27 kilometres of strike. Mineralization has been defined within multiple stratigraphic levels. Our initial expectations have been exceeded and the concept of a new copper district is well supported by data.  Further prospecting results from south Sacanche and Tabalosos, located 80 kilometres to the north, will follow over the coming months as further results from the field season start to be received."

Channel samples are considered representative of the in-situ mineralization samples and sample widths quoted approximate the true width of mineralization, while grab samples are selective by nature and are unlikely to represent average grades on the property.

High grade copper mineralization has been discovered in multiple mineralized positions at Sacanche, over a 27 kilometre strike.  Two distinct sub-types of the sediment hosted copper style are described throughout Hannan's claim application areas:

1.  The first style is hosted by the Cushabatay Formation:

2.  The second style is hosted by the Sarayaquillo Formation:

Hannan's interpretation is that copper and silver were deposited from low‐temperature oxidised saline brines formed from the several hundred metre thick Pareni Salt Formation. The brines scavenged metals (principally copper ± silver and associated lead and zinc) from the deeper Mitu Group red beds and volcaniclastics which were deposited in a failed Traissic rift. The circulation of saline fluids across the redox boundary was induced and focused by halokinesis.Geological relationships suggest halokinesis was initiated during Jurassic rifting and was active until the early to mid-Cretaceous which coincides with the formation of an Andean foreland basin.

In other news, two claim applications with a total area of 2,000 hectares has been submitted to Ingemmet, covering high grade copper mineralization at Sacanche North.

Management of Hannan have significant prior experience in Peru, which is the world's second largest copper producer. The country's copper output is forecast to increase from 2.5 million tonnes ("Mt") in 2018 to 3.8Mt by 2027, averaging 4.7% annual growth. Sediment-hosted deposits are the world's second-most important source of copper accounting for approximately 20% of world production.

Hannan Metals Limited is a natural resources and exploration company developing sustainable and ethical resources of metal needed to meet the transition to a low carbon economy. Over the last decade, the team behind Hannan has forged a long and successful record of discovering, financing and advancing mineral projects in Europe and Peru.