VANCOUVER, Aug. 7, 2018 /CNW/ - Hannan Metals Limited ("Hannan" or the "Company") (TSXV: HAN) (OTCPK: HANNF) is pleased to provide an update on the Company's forthcoming diamond drilling program at the 100% owned Clare zinc project in Ireland. Following the recent closing of a C$1.1 million financing, Hannan is well positioned to progress to the next stage of discovery within the Irish Midlands, one of the world's best established zinc mining districts. 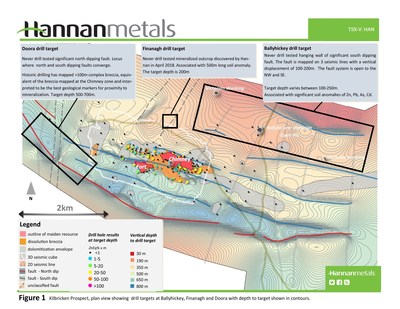 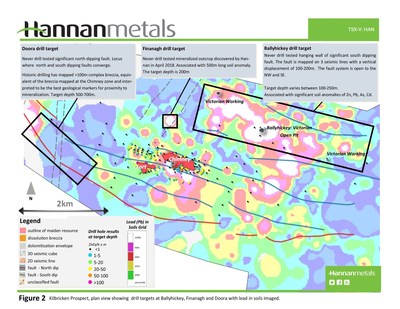 Michael Hudson, Chairman and CEO states, "Over the past year Hannan has completed extensive seismic, drilling and geochemical programs at the Clare zinc project. With this bank of new data, the project is now perfectly poised for drill testing of high priority shallow targets adjacent to the Kilbricken resource. Following our over-subscribed placement of C$1.1M, we are moving quickly, with a drill rig soon to be mobilized to site with the aim to define further standalone mineralized bodies."

The three drill target areas are:

Hannan Metals Limited has 100% ownership of the County Clare Zn-Pb-Ag-Cu project in Ireland, which consists of 9 prospecting licences for 32,223 hectares. Zinc remains in tight supply amidst rising demand and stagnant supply. Ireland is a leading global jurisdiction for zinc mining and exploration.

Over the last decade, the team behind Hannan has forged a long and successful record of financing and discovering mineral projects in Europe. Additionally, the team holds extensive zinc experience, gained from the world's largest integrated zinc producer of the time, Pasminco Ltd.