TORONTO, May 3, 2019 /CNW/ - Gratomic Inc. ("Gratomic" or the "Company") (TSX-V: GRAT) (CB81–FRANKFURT) a vertically integrated graphite to graphene, advanced materials development company is pleased to provide an update from its Aukam Graphite Mine in Namibia. The Company has been advancing the Graphite Project on three fronts focusing on exploration and diamond drilling, construction of on-site offices, laboratory, and living quarters, and the construction of a commercial scale graphite processing plant. The commercial scale graphite plant, capable of producing in excess of 20,000 tonnes of graphite concentrate per year, will replace the existing pilot plant commissioned in 2018 which successfully produced 5.5 tonnes of graphite concentrate grading between 88%-96% Carbon as Graphite ("Cg"). 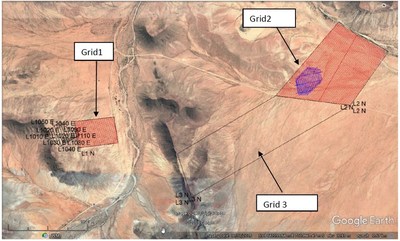 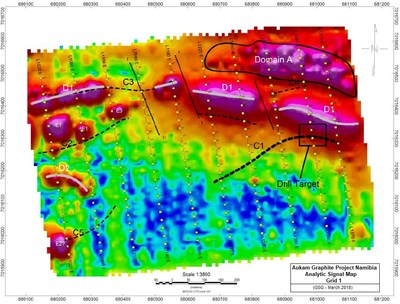 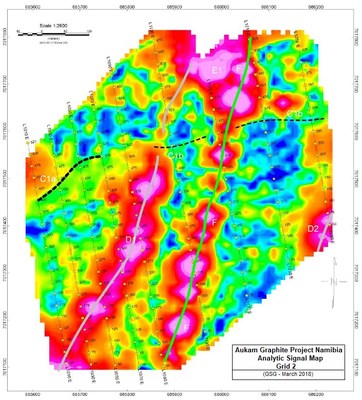 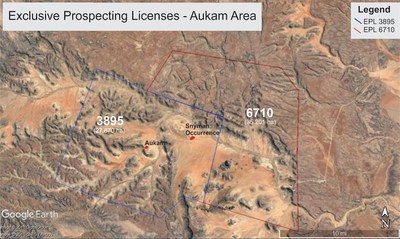 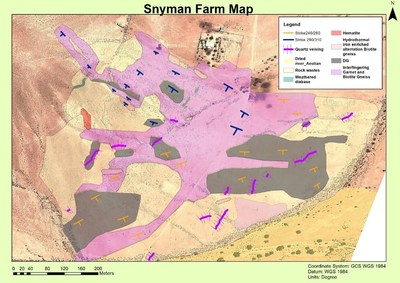 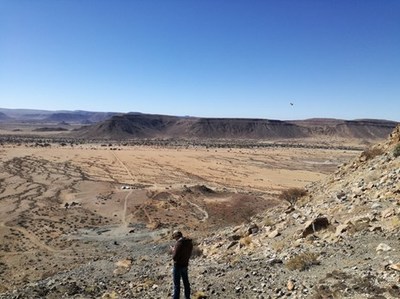 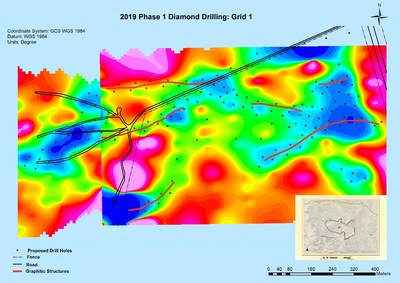 The Aukam Graphite Project is located in southern Namibia close to the port city of Luderitz. The property hosts five underground adits which were mined periodically between 1940 and 1974.  Graphite mineralization at Aukam is of the vein or lump type and occurs as massive lenses and veins. Graphite has also been observed as minor disseminated patches hosted in variably altered granite.

During 2018, Gratomic contracted Gregory Symons Geophysics (GSG) to perform Horizontal Loop Electromagnetics (HLEM) and magnetic surveys in continuation of previous geophysical surveys undertaken in 2016/2017.  The original survey was performed in the vicinity of the Aukam Mine marked by the black polygon in Figure1 below.  During the 2018 geophysical survey, ground electromagnetic and magnetic surveys were completed in two areas identified as Grid 1, which lies East of the Aukam Mine, and a portion Grid 2 as indicated in purple, known as Snyman Graphite Occurrence (see Figure 1).

Grid 1 adjoins the previous survey over the mine area at Aukam and extends the strike length covered to 1.6 kilometres to the East. Significant interpretations pertaining to Grid 1 include:

Significant interpretations pertaining to Grid 2 include:

During 2018 Gratomic was granted additional Exclusive Prospecting License, Number 6710 (EPL 6710) by the Namibian Ministry of Mines and Energy, with an initial exclusivity of three years.  The license area is contiguous with EPL 3895, which covers the Aukam graphite deposit and the Snyman graphite occurrence (see Figure 4). The application for EPL 6710 was submitted in order to cover the potential strike extension of the Snyman graphite occurrence to the east. In addition, EPL 6710 covers an additional area considered prospective for graphite within the "Aukam window" where rocks hosting the Aukam and Snyman graphite are exposed beneath the regional unconformity at the base of the Nama Group sedimentary rocks. The addition of the new EPL increases the area of prospective geology covered to 63,072 hectares (630 square kilometres).

Regional exploration in 2018 included mapping and sampling of graphite occurrences throughout the Company's license areas with emphasis on the 400 hectares encompassing both the Snyman graphite occurrence and the area east of the Aukam Mine. Compilation, interpretation and presentation of all available geologic data allowed for subsequent diamond drill targeting with initial drilling planned for the area immediately east of the existing underground workings of the Aukam Mine.

Two company drills were deployed to Aukam in March 2019 with diamond drilling commencing in April.  The company is currently operating a Longyear 38 with a 2-cylinder XY-1 drill for a backup.  Initial targets being drilled are proximal to the Aukam Mine and are spaced at 25 metres with infill drill planned to follow based on results. Five holes have been completed at the time of this release.

During 2018 Gratomic completed the construction and start-up of its' prototype processing plant to test and refine the processes that will be used for commercial production. The Aukam processing plant uses a simple crushing, grinding and flotation system. Graphite feed for the prototype plant was obtained from screening and sorting of existing stockpiles from historical mining. The processing plant operated for 26 days during April and for all 31 days in May of 2018. While operational, data was collected at each phase of the process and test results from samples were sent to Gecko labs with the subsequent results used to optimize plant processes. The following tests and optimization were conducted:

The Company continued to optimize the pilot plant processing stockpiled graphite mineralization throughout 2018. To date, the plant has processed 9 tonnes of the graphite mineralization with 5.5 tonnes of graphite concentrate grading between 88% and 96% Cg shipped to Perpetuus Carbon Technologies ("Perpetuus") for the manufacture of graphene to be used in the automobile and bicycle tire industry. Graphene made from Aukam graphite continues to be tested in Europe and Asia with good results.

Gratomic and Perpetuus are currently in collaboration to build on Perpetuus' capability to produce high quality surface modified graphene in support of the anticipated volumes required by the tire manufacturing industry. Additional applications that have now been generated in a preproduction format include radiant heating membranes and super hydrophobic coatings with an addressable market that include; graphene inks, marine, oil & gas, power generation, industrial (repair & maintenance), infrastructure (new build) and automotive & transportation among others.

Plant expansion to increase capacity to 20,000 tonne per annum began in2018. Initial activities included construction of a platform for drying graphite product and of a washing bay for equipment, complete with a containment system to collect impacted water. Steel drying pans, an oven, and two screens were also assembled and successfully tested. Continued upgrades involved the extension of the working area on the pilot plant by another 35 metres to the north-west to accommodate new crushing equipment and conveyer belts.  Analysis of all plant processes continues to optimize efficiencies of each process such as rod mills, flotation columns, and reagent introduction. Four different tests were run with the first test being used as a base line.  Samples were taken from the rod mill feed, mill discharge, and screen under-and-over size.  Calculations were made to determine the amount of chemicals needed to be introduced into the mixers according to the density and volume of the mixer feed.

Gratomic is continuing with its systematic assembly of the commercial scale graphite processing plant.  Next steps will include:

Construction of the onsite Management Camp consisting of offices, laboratory, kitchen, and living quarters, is ongoing.  Work began with two of the larger structures during Q4/2018.

Steve Gray, P.Geo. has reviewed, prepared and approved the scientific and technical information in this press release and is Gratomic Inc's "Qualified Person" as defined by National Instrument 43-101 - Standards of Disclosure for Mineral Projects.

Gratomic is an advanced materials company focused on mine to market commercialization of graphite products most notably high value graphene-based components for a range of mass market products. We are collaborating with a leading European manufacturer of graphene to use Aukam graphite to manufacture graphene products for commercialization on an industrial scale. The company is listed on the TSX Venture Exchange under the symbol GRAT.