VANCOUVER, BC, June 22, 2020 /CNW/ - GR Silver Mining Ltd. (TSXV: GRSL), (FRANKFURT: GPE), (OTCQB: GRSLF) ("GR Silver Mining" or the "Company") – is pleased to announce drill results at its 100%-owned Plomosas Silver Project ("Plomosas Project") in Sinaloa, Mexico. These results are located in the Plomosas Mine Area, one of six priority areas with a combination of recent (2016 to 2018) and historical drill data being released by the Company. 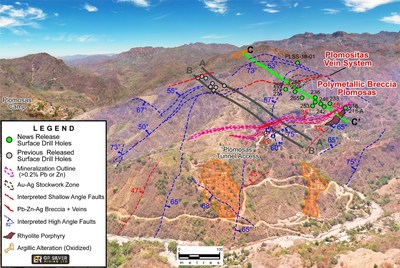 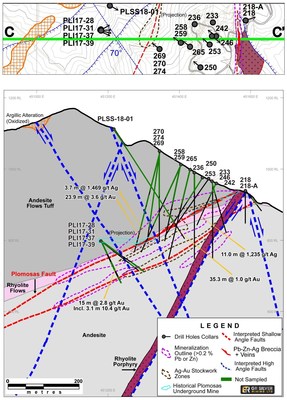 These drill hole results show high-grade silver and gold mineralized zones outside of the previously mined polymetallic (Pb-Zn-Ag-Au) mineralization in the Plomosas Mine Area. The Au-Ag enriched veins and breccias occur in vertical and shallow-dipping fault zones on the footwall and hanging wall of the existing polymetallic mineralized zone, revealing potential extensions for a future resource estimation. The results also confirm the continuity of the polymetallic mineralized zone down dip and along strike outside the previously mined areas. The drill section discussed in this news release is a step-out section, 400 m north (Figure 1) of drill holes reported in the previous news release (see News Release dated May 13, 2020).

GR Silver Mining President and CEO, Marcio Fonseca, commented, "We continue to systematically review the extensive un-released historical and recent drill hole database at the Plomosas Silver Project. The review confirms the presence of high-grade Au-Ag zones, which were not previously explored and evaluated by previous owners, nor integrated into a resource estimation. Most of the new mineralized veins are accessible through existing underground development, which facilitates planning of additional underground drilling and provides opportunities for new discoveries. The company has reviewed 51 drill holes at the Plomosas Mine Area to date and 256 drill holes remain to be validated. The validated drill holes are already integrated into a 3D database allowing interpretation of a wide footprint of high-grade multiple veins and hydrothermal breccias.

Our ongoing investigations along the 8,000 m of underground tunnels at the Plomosas Mine Area, including geological/structural mapping and sampling, continue to reveal new mineralized zones. These new zones demonstrate that mineralization is not only hosted within a single high-grade structure but within multiple cross-cutting shallow and vertical structures. The Company has also encountered evidence of multiple mineralization styles (massive sulphide Pb-Zn lenses, brecciated and stockwork polymetallic mineralized systems and strong gold-silver rich quartz veined mineralized zones) during recent underground investigations, which are currently being integrated into the Plomosas Mine Area 3D model."

Table 1 summarizes the most significant drill assay results for this third group of holes released for the Plomosas Mine Area.

The existing drill holes for the Plomosas Project were generated by drill campaigns completed by First Majestic Silver Corp. ("First Majestic") between 2016-2018 and Grupo Mexico between 1982-2000. They both form an extensive surface and underground core drilling database which GR Silver Mining is consolidating and validating.

The primary objective of Grupo Mexico was the discovery of Pb and Zn mineralization as potential feed for their historical flotation plant operations nearby. First Majestic drilled the Plomosas Mine Area targeting new mineralized zones down dip and along strike from the surface and underground sites. GR Silver's QA/QC protocol dictates that wherever assay intervals are identified as missing within the drill hole database, the relevant drill holes will be re-examined, sampled, and assayed using the remaining core to complete the sequence of results.

Table 2 summarizes the historical drill hole intervals previously not sampled ("NS") for this third group of holes released for the Plomosas Mine Area.

The company is currently re-logging and sampling potentially mineralized zones in the existing (non-sampled) core available on site, aiming to integrate the results into the current drilling database.

The preliminary review and integration of all data has indicated the presence of two significant mineralized structures.

The first contains higher lead, zinc and silver concentrations with strike N10E-NS and dip 40⁰, mostly sub-parallel to the main shallow Plomosas Fault (Figure 2). Massive sulphide silver-rich lenses (sphalerite, galena and minor chalcopyrite) are common occurrences in this mineralized structure (Link to Photos). The mineralization style is hosted preferentially in pyroclastic flows, volcanic breccias and fractured rocks, and it preferentially favours andesite breccias. It appears to form a series of bodies 50 - 80 m long by 40 - 60 m wide and varied thickness, due to pinch-swell geometry visible in the underground workings.

The second type of mineralized structures show banded and drusy quartz, strong silicification, networks of quartz veinlets and quartz breccias, containing significant gold and silver values and low lead and zinc content. They are represented by two systems with a general orientation N40E and N40W and variable dip angles, from 50⁰ to 70⁰.

The Company continues to validate all core assay results in the extensive Plomosas drill hole database, with the objective to fully integrate them into the 3D Model. Other ongoing site activities include underground mapping and sampling of the Plomosas Mine Area, drill core sampling and assaying, and initial bulk sampling of selected underground areas for future metallurgical testwork.

Additionally, the Company is advancing discussions with drill contractors to initiate a drilling program on the existing zones and drill targets in the near future.

The scientific and technical data contained in this News Release related to the Plomosas Project was reviewed and/or prepared under the supervision of Marcio Fonseca, P.Geo. He has approved the disclosure herein.

The recent drill holes completed by First Majestic from 2016 to 2018, followed QA/QC protocols reviewed and validated by GR Silver Mining, including insertion of blank and standard samples in all sample lots sent to First Majestic's Laboratorio Central facilities in La Parilla, Durango, for sample preparation and assaying. Additional validation and check assays were performed by an independent laboratory at SGS de México, S.A. de C.V. facilities in Durango, Mexico. The analytical methods applied for these recent holes for Ag and Au assays comprised of Fire Assay with Atomic Absorption finish for samples above Au >10ppm and Ag >300ppm and Gravimetric Finish. Pb and Zn were analyzed using Inductively Coupled Plasma Optical Emission Spectrometry.

GR Silver Mining Ltd. is a Mexico-focused company engaged in cost-effective silver-gold resource expansion on its key assets which lie on the eastern edge of the Rosario Mining District, Sinaloa, Mexico.

GR Silver Mining owns 100% of the Plomosas Silver Project located near the historic mining village of La Rastra, within the Rosario Mining District. The Project is a past-producing asset where only one mine, the Plomosas silver-gold-lead-zinc underground mine, operated from 1986 to 2001. The Project has an 8,515-hectare property position and is strategically located within 5 km of the San Marcial Silver Project in the southeast of Sinaloa State, Mexico. The Plomosas Project comprises six areas with an average of 100 surface and underground drill holes in each area, geophysical and geochemical data covering most of the concession, and the delineation of 16 exploration/drilling targets.

Plomosas and San Marcial collectively represent a geological setting resembling the multimillion-ounce San Dimas Mining District which has historically produced more than 600 Moz silver and 11 Moz gold over a period of more than 100 years.

GR Silver Mining's other projects are situated in areas attractive for future discoveries and development in the same vicinity of Plomosas and San Marcial in the Rosario Mining District.