VANCOUVER, May 13, 2020 /CNW/ - GR Silver Mining Ltd. (TSXV: GRSL, FRANKFURT: GPE, OTCQB: GLYXF) ("GR Silver Mining" or the "Company") – is pleased to report high-grade drill results at its 100% owned Plomosas Silver Project ("Plomosas Project") in Sinaloa, Mexico. These results are located in the Plomosas Mine Area, one of six priority areas with a combination of recent (2016 to 2018) and historical drill data being released by the Company (See Drone Image). 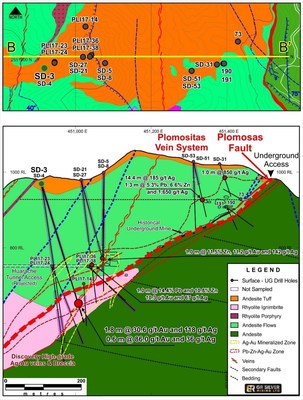 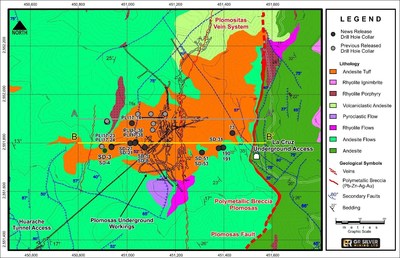 GR Silver Mining President and CEO, Marcio Fonseca, commented, "With the confirmation  of the new high-grade Au-Ag zones hosted in subvertical faults, 100 m along strike from the previously released cross section, we envisage an  increased potential for definition of multiple high-grade mineralized veins for future resource estimation. These results confirm multiple mineralization styles at the Plomosas Project, outside of the previously mined polymetallic high-grade Pb-Zn-Ag-Au breccia that was typically hosted in shallow-dipping regional faults. GR Silver Mining is the first company to fully integrate and place all data in a 3D model allowing interpretation of a wide footprint of  high-grade multiple veins. This modelling allows us to plan future expansion drilling and resource estimation. Our investigations of the extensive unreported drill database covering the Plomosas Mine Area continue to support a model with potential for mineralization not only hosted within a single high grade structure but within multiple cross-cutting high-grade veins (See high-grade core photo intervals)."

Table 1 summarizes the most significant drill assay results for the second group of holes released for the Plomosas Mine Area.

The existing drill holes for the Plomosas Project were generated by drill campaigns completed by Grupo Mexico between 1982-2000 and First Majestic Silver Corp. ("First Majestic") between 2016-2018 and form an extensive database which GR Silver Mining is consolidating and validating. The primary objective of Grupo Mexico was the discovery of Pb and Zn mineralization as potential feed for their historical flotation plant operations nearby. First Majestic drilled the Plomosas Mine Area aiming to define new mineralized zones down dip and along strike from the surface and underground sites. Wherever assay intervals are identified as missing within the drill hole database, the relevant drill holes will be re-examined, sampled, and assayed using the remaining core to complete the sequence of results.

Table 2 summarizes the historical drill hole intervals previously not sampled ("NS") for the second group of holes released for the Plomosas Mine Area.

The high-grade Au-Ag vein intersections consist of mineralization hosted on high angle faults cross cutting the shallow angle regional faults (Plomosas Fault). Mineralization consists of 0.6 to 1.8 m wide banded quartz-acanthite-argentite-pyrite veins and breccias, dipping at an estimated 70° ESE. Conceptually, since the historical Plomosas operation only mined the polymetallic shallow dipping breccia, this new interpretation defines a series of low sulphidation epithermal veins, proximal to each other, close to existing underground infrastructure and accessible for drilling and potential future exploitation. The Plomosas Mine Area has a high-grade footprint approximately 300 m along strike, as defined by interpretation of released drill holes and historical underground sampling, and is open in most directions, Figure 2. Further drilling for potential expansion of the  high-grade footprint is currently being planned.

The Company continues to validate all drill hole results in the extensive Plomosas drill database aiming to fully integrate them in a 3D Model. Other ongoing site activities include underground mapping and sampling on the Plomosas Mine Area, drill core sampling and assaying, and initial bulk sampling of selected underground areas for future metallurgical testwork

The Company also announces that, pursuant to the Company's 10% rolling stock option plan and in compliance with the policies of the TSX Ventur Exchange, it has granted incentive stock options to certain directors, officers, and consultants of the Company to purchase up to an aggregate of 1,385,000 common shares of the Company.  These options are exercisable for a period of 5 years at a price of $0.335 per share.

The scientific and technical data contained in this News Release related to the Plomosas Project was reviewed and/or prepared under the supervision of Marcio Fonseca, P.Geo. He has approved the disclosue herein.

GR Silver Mining has reviewed  information related to the historic Grupo Mexico drill holes and believes the results are of sufficient quality and suitable for disclosure. GR Silver has not verified the results. The following drill holes were drilled by Grupo Mexico, SD-3, SD-4, SD-5, SD-8, SD-21, SD-27,SD-51, SD-53,73, 139, 190 and 191.

GR Silver Mining Ltd. (GRSL.V) is a Mexico-focused company engaged in cost-effective silver-gold resource expansion on its key assets which lie on the eastern edge of the Rosario Mining District, Sinaloa, Mexico.

PLOMOSAS SILVER PROJECTGR Silver Mining owns 100% of the Plomosas Silver Project located near the historic mining village of La Rastra, within the Rosario Mining District. The Project is a past-producing asset where only one mine, the Plomosas silver-gold-lead-zinc underground mine, operated from 1986 to 2001. The Project has an 8,515-hectare property position and is strategically located within 5 km of the San Marcial Silver Project in the southeast of Sinaloa State, Mexico. The Plomosas Project comprises six areas with an average of 100 surface and underground drill holes in each area, geophysical and geochemical data covering most of the concession, and the delineation of 16 exploration/drilling targets.

Plomosas and San Marcial collectively represent a geological setting resembling the multimillion-ounce San Dimas Mining District which has historically produced more than 620 Moz silver and 11 Moz gold over a period of more than 100 years.

OTHER PROJECTSGR Silver Mining's other projects are situated in areas attractive for future discoveries and development in the same vicinity of Plomosas and San Marcial in the Rosario Mining District.