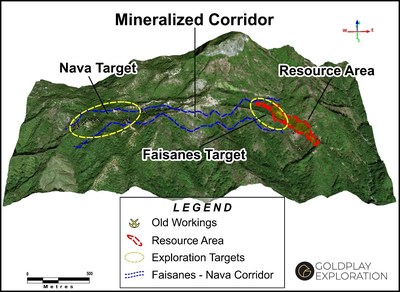 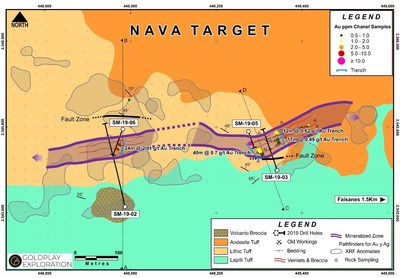 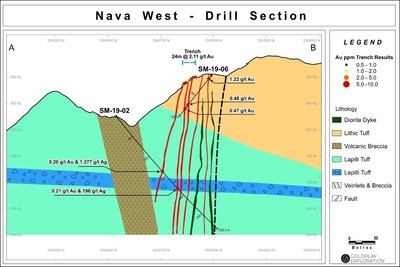 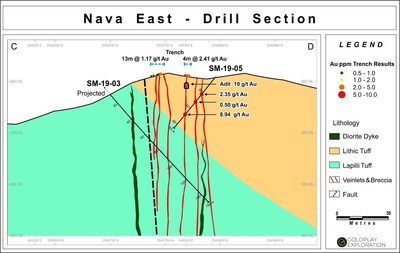 Goldplay President and CEO Marcio Fonseca commented, "We are pleased to report the mineralized intercepts, including high grade silver, in the maiden drill program at San Marcial's Nava Target. Goldplay's 2019 field studies mark the first time in approximately ten years that any type of exploration has been carried out at the project. The encouraging results warrant further exploration, advancing the Company's objective of resource expansion of San Marcial."

Highlights at the Nava Gold Target include:

Nava is located 1.5 km west of the San Marcial resource area (Figure 1) and approximately 1 km west of the Faisanes drill discovery containing 1 m at 204.6 g/t Au (see News Release 30 July 2019). Phase I drilling at the Nava Target was designed to test the lithological and structural controls of the interpreted low sulphidation epithermal gold system, as well as the distribution of mineralization in the vicinity of encouraging gold results from surface exploration earlier in the year, including a channel sample of 24 m at 2.11 g/t Au. The host rocks are similar to the suite of volcanic rocks hosting the San Marcial silver deposit however, the mineralization is decidedly different, being predominantly gold.

Goldplay's exploration of the Nava Gold Target focused on two hills with evidence of small-scale artisanal mining activity and exposed quartz veins that returned visible gold in panned samples. Recent surface exploration and drilling results support the continuity of the mineralized system down dip and along strike, in addition to recent evidence of narrow high-grade Ag-Au mineralization (Figures 3 and 4).

The main controls on mineralization at Nava appear to be sub parallel (ENE-WSW-trending) sets of quartz veinlets, tending to stockworks in places and locally breccias, in a low sulphidation epithermal system. Encouragingly, the mineralization was found not to be confined to quartz veins but also in the wall rock, resulting in broad mineralized zones.

The two drilled cross sections are shown in Figures 3 and 4 (below) and display localized intervals of quartz veining, stockwork and also brecciation, within the four drill holes. Gold mineralization is sporadic across these two cross sections.

The Company's maiden drill program at the San Marcial Project is currently being completed with additional drilling at the Faisanes and Guacamayo targets, testing for potential NW and SE extensions, respectively, to the San Marcial resource area.

The scientific and technical data contained in this news release related to the San Marcial Project was reviewed and/or prepared under the supervision of Marcio Fonseca, P.Geo., a non-independent qualified person to Goldplay Exploration Ltd. who is responsible to ensure that the geological information contained in this news release is accurate and who acts as "qualified person" under the National Instrument 43-101 Standards of Disclosure of Mineral Projects.

Goldplay has implemented QA/QC procedures which include insertion of blank and standard samples in all sample lots sent to SGS de México, S.A. de C.V laboratory facilities in Durango, Mexico, for sample preparation and assaying. For every sample with results above Ag >100 ppm (over limits), these samples are submitted directly by SGS de Mexico to SGS Canada Inc at Burnaby, BC. The analytical methods are: 4-acid Digest and Inductively Coupled Plasma Optical Emission Spectrometry with Lead Fusion Fire Assay with gravimetric finish for silver above over limits. For gold assays the analytical methods are Lead Fusion and Atomic Absorption Spectrometry Lead Fusion Fire Assay and gravimetric finish for gold above over limits.

Goldplay has successfully consolidated a district-sized portfolio, owning >250 sq. km of mineral concessions in the historic Rosario gold-silver Mining District in the state of Sinaloa, Mexico. Its flagship project, San Marcial, consists of a 1,250 ha land package located south of the La Rastra and Plomosas historic mines. San Marcial is a near-surface, high-grade silver, lead, and zinc open pit amenable project for which a NI 43-101 resource estimate was completed by Goldplay in early 2019. Additionally, bonanza-grade gold was drilled in July 2019 at San Marcial, opening up the potential for further gold success. Goldplay's 100% owned El Habal precious metals project is located 20 km west of the San Marcial Project. It comprises 3,700 hectares and is located 75 km southeast of the modern coastal port of Mazatlán, and 10 km on a paved road from the historic mining town of Rosario, Sinaloa, Mexico.

Goldplay's current focus includes expanding its NI 43-101 resource estimate at the San Marcial project, which contains 36Moz AgEq (indicated) + 11Moz AgEq (Inferred), by defining new high-grade gold and silver targets along the project's 6 km mineralized trend. Goldplay is the first company to perform exploration work at San Marcial in over 10 years. It is a low-risk development stage project, fully exploration permitted and supported by the local communities to carry out all proposed exploration activities. Only 500 m of the 6 km trend has been drilled to date, highlighting the significant potential for further discoveries. The Company has identified 8 high-priority targets along the 6 km trend and is currently drilling two high-priority targets at Faisanes and Nava. Some of these exploration targets consist of old shallow pits, caved shafts and historic shallow underground workings in areas with extensive hydrothermal alteration, hosted by major regional structures in a felsic volcanic environment. Mapping and sampling by Goldplay have revealed evidence of dacite-rhyolite dome structures in a highly prospective geological environment for additional high-grade gold and silver discoveries.

Goldplay's team has over 30 years of experience with senior roles in exploration, financing, and development in the mining industry, including over ten years of extensive exploration experience in the Rosario Mining District, leading to previous successful discoveries.

The NI 43-101 reports for each of the San Marcial and El Habal Projects are available on SEDAR.