Results Include 124.4 Grams Per Tonne of Gold Over 1 Metre 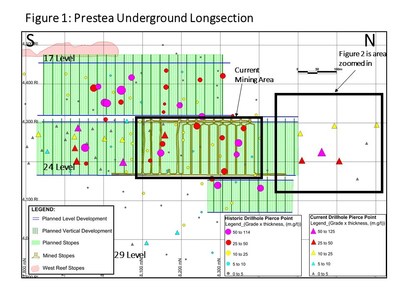 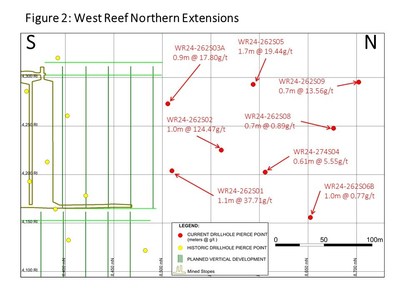 Drilling commenced from a newly excavated northern drill chamber at the beginning of 2019 (X cut 262N) in the Prestea Underground 24 level. Eight holes have been completed to date in this drilling program, targeting the northern extension of the defined reserves. All holes intersected the West Reef structure, with several returning strong economic grades and widths.

These results confirm the extension of gold mineralization into this area and represent the opportunity to add new stopes, along strike of the current mining front, which have the potential to be mined during the next two years.

Initially, drilling has targeted the West Reef structure at approximately 100 × 100 m centers.  In areas where economic widths and grades have been intersected, the drill spacing will be closed in to 25-30 m × 25-30 m to add confidence to the mineralization for conversion to an indicated mineral resource and subsequently to a probable mineral reserve, should the economics prove viable.

Once the infill, closer spaced drilling program has been completed in Q4 2019, the drilling plan will shift to further resource expansion drilling on a 100 × 100 m drill spacing targeting the West Reef down-dip below 24 level, and up-dip above 17 level. These drilling results will be used to update the inferred mineral resource base at Prestea Underground and, if successful, will be followed up on a tighter drill spacing in 2020. Results to date are encouraging and should the infill drilling convert these areas to indicated mineral resources, this could potentially add additional reserves in the immediate area of mining infrastructure on 24 level adding optionality and flexibility to the current mine plan as well as replacing depleted reserves.

Figures 1 and 2 show drill hole locations and can also be seen by following: http://files.newswire.ca/184/GoldenStarfig12.pdf

A definition drilling program in the current reserve areas of the Prestea West Reef ore body has also been ongoing to ensure adequate definition of the reserves for short to medium term planning prior to mining. The higher drilling density will enable better mine planning and stope design.

A total of 19 holes for 4,100 m have been completed in this program since drill results from Prestea were last reported, including Nine holes (2,900 m) drilled in 2019.

Development is complete on 11 Alimak raises, and stope blasting complete on the first eight stopes. The twelfth raise is complete and the thirteenth raise has advanced approximately 150 m and long hole drilling production is set up well to ensure that the ninth stope blasting was completed in May and the stope sequence will continue cascading to provide ore continuity in the second half of 2019.

Decline development has also recently begun on the 17 level to access the second panel of ore up-dip of the stopes currently being mined from the 24 level. This will ensure continuity of ore production once the ore on the 24 level is depleted.

As a result of the operational challenges the Company has faced at the Prestea underground mine, a request for tenders was initiated for a technical and operational review from various consulting firms. CSA Global has been contracted to begin this review with the mandate to take a holistic approach to understanding the problems facing the operation. All aspects of technical, operational and management areas will be examined in order for recommendations to be set forth to the Company for improvements at Prestea. The Company expects to communicate an update in Q3 of 2019.

Golden Star is an established gold mining company that owns and operates the Wassa and Prestea underground mines in Ghana, West Africa. Listed on the NYSE American, the Toronto Stock Exchange and the Ghana Stock Exchange, Golden Star is focused on delivering strong margins and free cash flow from its two high-grade, low cost underground mines. Gold production guidance for 2019 is 220,000-240,000 ounces at a cash operating cost per ounce of $620-$680. As the winner of the PDAC 2018 Environmental and Social Responsibility Award, Golden Star is committed to leaving a positive and sustainable legacy in its areas of operation.

Some statements contained in this news release are "forward-looking statements" within the meaning of the Private Securities Litigation Reform Act of 1995 and "forward looking information" within the meaning of Canadian securities laws. Forward looking statements and information include, but are not limited to, statements and information regarding: planned exploration in Q2 and Q3 of 2019; the ability to delineate mineralization in the drilled area to add new mineral resources to eventually convert into mineral reserves, which would add optionality and flexibility to the current mine plan and replace depleted reserves; planned further drilling of 5,000 m in the Northern West Reef Extension before the end of Q3 2019; planned exploration in Q4 2019 to drill test the extents of the West Reef high grade shoot up and down-dip as well as along the plunge below 24 level and above 17 level; the potential to mine areas drilled in the Northern West Reef Extension over the next two years; the intent to conduct a further 1,400 m of in-fill drilling in Q2 2019; the addition of new stopes at Prestea Underground which have the potential to be mined during the next two years; completion of ninth stope blasting in May 2019; belief that the stope sequence will continue cascading to provide ore continuity in the second half of 2019; and 2019 production guidance and cash operating cost per ounce guidance. Generally, forward-looking information and statements can be identified by the use of forward-looking terminology such as "plans", "expects", "is expected", "budget", "scheduled", "estimates", "forecasts", "intends", "anticipates", "believes" or variations of such words and phrases (including negative or grammatical variations) or statements that certain actions, events or results "may", "could", "would", "might" or "will be taken", "occur" or "be achieved" or the negative connotation thereof. Investors are cautioned that forward-looking statements and information are inherently uncertain and involve risks, assumptions and uncertainties that could cause actual facts to differ materially. There can be no assurance that future developments affecting the Company will be those anticipated by management. Please refer to the discussion of these and other factors in Management's Discussion and Analysis of financial conditions and results of operations for the year ended December 31, 2018, and our annual information form for the year ended December 31, 2018, each of which is filed on SEDAR at www.sedar.com. The forecasts contained in this press release constitute management's current estimates, as of the date of this press release, with respect to the matters covered thereby. We expect that these estimates will change as new information is received. While we may elect to update these estimates at any time, we do not undertake to update any estimate at any particular time or in response to any particular event.

The technical contents of this press release have been reviewed and approved by S. Mitchel Wasel, BSc Geology, a Qualified Person pursuant to National Instrument 43-101. Mr. Wasel is Vice President of Exploration for Golden Star and an active member and Registered Chartered Professional of the Australasian Institute of Mining and Metallurgy.

The results for Prestea Underground stated herein are based on the analysis of saw-split HQ/NQ diamond half core or a three kilogram single stage riffle split of a nominal 25 to 30 kg Reverse Circulation chip sample which has been sampled over nominal one meter intervals (adjusted where necessary for mineralized structures). Sample preparation and analyses have been carried out at SGS or Intertek Laboratories in Tarkwa, which are independent from Golden Star, using a 1,000 gram slurry of sample and tap water which is prepared and subjected to an accelerated cyanide leach (LEACHWELL). The sample is then rolled for twelve hours before being allowed to settle. An aliquot of solution is then taken, gold extracted into Di-iso Butyl Keytone (DiBK), and determined by flame Atomic Absorption Spectrophotometry (AAS). Detection Limit is 0.01 ppm.

All analytical work is subject to a systematic and rigorous Quality Assurance-Quality Control (QA-QC). At least 5% of samples are certified standards and the accuracy of the analysis is confirmed to be acceptable from comparison of the recommended and actual "standards" results. The remaining half core is stored on site for future inspection and detailed logging, to provide valuable information on mineralogy, structure, alteration patterns and the controls on gold mineralization