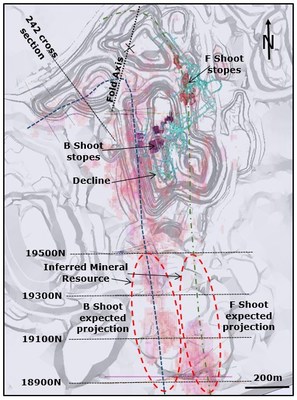 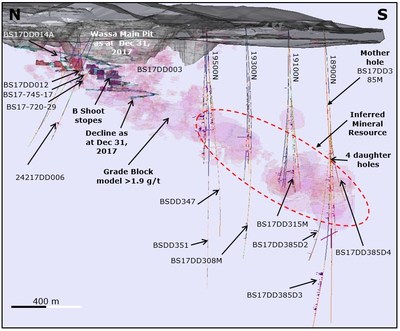 B Shoot and F Shoot South

"These exciting intercepts from the B Shoot South and F Shoot South continue to support our belief that Wassa has substantial potential at depth.  They provide further confirmation that the ore body extends approximately 600m to the south of the current Mineral Reserves and remains open.  Importantly, they also suggest that it may widen at depth.  We believe that Wassa is significantly larger than the current Mineral Resource estimate suggests and during 2018 we will continue to test its extensions through further drilling.  Wassa Underground is a central part of our exploration strategy in 2018 and I look forward to releasing further information about our other exploration targets during this quarter."

During the second half of 2017 Golden Star's exploration program continued to test the extent of the B Shoot and F Shoot zone of Wassa Underground from surface.  Its three focuses were down plunge to the south of the Inferred Mineral Resources, up plunge of the planned stoping areas and into the 242 trend, which has previously been mined from surface.

During the course of drilling to the south, the exploration team identified that they had intersected the F Shoot, as well as the B Shoot.  The F Shoot was mined for nine months at the start of Wassa Underground's mine life before the decline reached the B Shoot ore body.  Golden Star also intersected a new horizon of mineralization in the footwall of the 242 trend, which has been named 242 FW.

The 2017 B Shoot South step out drilling program comprised 6,818m in total and included one 'mother' hole with four directional 'daughter' holes, wedged and drilled at an angle from the mother hole.

The mother hole, BS17DD385M, was collared 180m to the south of Wassa Underground's current Inferred Mineral Resources.  Its objective was to test the down plunge projection of the 70.5m1 zone of mineralization grading 5.9 g/t Au from a depth of 742.4m, which was intersected in hole BSDD315M drilled during the previous deep drilling campaign in 20142.  The results of this hole were reported on September 19, 2017 and they confirmed that the high grade zone extended 180m to the south of Wassa's Inferred Mineral Resources3.

The results from the four daughter holes provide further confirmation of the extension of the ore body, although the zones are believed to be related to the F Shoot trend, rather than the B Shoot, due to the nature of the folding.  The daughter holes were wedged and drilled at angles both above and below the mother hole, testing the zone over approximately 400m of dip extension.  The thickest zone of gold mineralization drilled to date at Wassa was reported from the third daughter hole: 94.0m1 averaging 4.4 g/t Au from 1,305.7m.  These results confirm the B Shoot and F Shoot's extensions to the south and further drilling is expected in 2018.

In addition to these directional holes, four holes tested the F Shoot Inferred Mineral Resource  up plunge, north towards the existing Mineral Reserve (on sections 19100, 19300 and 19500), including two new holes and two existing holes, which were re-entered and deepened.

In the second half of 2017, two DD holes (612m) were drilled from within the existing workings of Wassa Underground to confirm the high grade results drilled from surface earlier in 2017.  These holes tested the B Shoot zone approximately 50m to the north of the last planned stopes on 695 Level, following up on the significant intercept reported in surface hole BS17DD003 of 23.8m1 grading 7.3 g/t Au from 289.9m, which was announced on September 19, 2017.2

The first of the new holes (BS17-720-29), which was drilled across the top of the interpreted zone, confirmed the grades and thicknesses intersected in the earlier hole, including 27.1m1 grading 8.7 g/t Au from 209.9m. The second new hole, (BS17-745-17), drilled approximately 20m up dip of the first new hole, also reported a significant intercept: 11.4m1 grading 7.3 g/t Au from 219.0m.  This confirmed the continuity of the gold mineralization 50m to the north of the planned stoping area.

Further drilling is planned in 2018 with the aim of delineating additional stopes to the north of the current underground workings, pending positive economics.  Results for several of the other 2017 surface holes were also received during the fourth quarter of 2017 and they are summarized in Appendix A.

The 242 zone is located in the flatter dipping western limb of the Wassa deposit scale fold.  The 242 FW underground target was discovered in 2017 and it is the first time that Golden Star has investigated the potential of the foot wall horizon.

Three holes were drilled into the footwall approximately 300m below the area that the Company had mined previously.  The northernmost hole (hole 24217DD006) returned an intercept of 6.8m1 grading 8.2 g/t Au from 488.0m and as a result, further drilling has been included in the 2018 exploration budget.  This drilling is expected to commence in the second half of 2018.

The full set of drilling results is listed in Appendix A and includes several compelling intercepts, as set out below.  Further drill sections showing the location of the drill holes are available at: http://www.gsr.com/operations/wassa/wassa-main

Significant intercepts from drilling of Wassa Underground (from surface)

All widths quoted in the press release are approximate true widths based on Golden Star's current geological knowledge and interpretations.

Golden Star is an established gold mining company that owns and operates the Wassa and Prestea mines in Ghana, West Africa. Listed on the NYSE American, the Toronto Stock Exchange and the Ghanaian Stock Exchange, Golden Star is focused on delivering strong margins and free cash flow from its two high grade, low cost underground mines. Gold production guidance for 2018 is 230,000-255,000 ounces at a cash operating cost per ounce of $650-730.  As the winner of the PDAC 2018 Environmental and Social Responsibility Award, Golden Star is committed to leaving a positive and sustainable legacy in its areas of operation.

Some statements contained in this news release are forward-looking statements within the meaning of the Private Securities Litigation Reform Act of 1995 and other applicable securities laws. Such statements include: the ability to increase Wassa Underground's near term and longer term production; the ability to increase Wassa Underground's life of mine and Mineral Resources and Mineral Reserves; the timing of further drilling results from Wassa Underground; the potential to add further stopes to Wassa Underground in the future; the potential of 242 FW to supply additional ore to the Wassa processing plant and increase production; the true width of mineralization to the south of the B Shoot and 2018 gold production and cash operating costs. Investors are cautioned that forward-looking statements are inherently uncertain and involve risks and uncertainties. Factors that could cause actual results to differ materially include timing of and unexpected events during exploration; variations in ore grade; variations in relative amounts of refractory, non-refractory and transition ores; technical or permitting issues; fluctuations in gold price and costs; availability of capital and/or external financing on acceptable terms; changes in U.S. and Canadian securities markets; and general economic conditions. There can be no assurance that future developments affecting the Company will be those anticipated by management. Please refer to the discussion of these risks and other factors in the Company's Annual Information Form for the year ended December 31, 2016 and other filings of the Company with the United States Securities and Exchange Commission and the applicable Canadian securities regulatory authorities. The forecasts contained in this press release constitute management's current estimates, as of the date of this press release, with respect to the matters covered thereby. We expect that these estimates will change as new information is received. While we may elect to update these estimates at any time, we do not undertake to update any estimate at any particular time or in response to any particular event.

The technical contents of this press release have been reviewed and approved by S. Mitchel Wasel, BSc Geology, a Qualified Person pursuant to National Instrument 43-101. Mr. Wasel is Vice President of Exploration for Golden Star and an active member and Registered Chartered Professional of the Australasian Institute of Mining and Metallurgy.

The results for Wassa Underground stated herein are based on the analysis of saw-split HQ/NQ diamond half core or a three kilogram single stage riffle split of a nominal 25 to 30 kg Reverse Circulation chip sample which has been sampled over nominal one meter intervals (adjusted where necessary for mineralized structures). Sample preparation and analyses have been carried out at SGS or Intertek Laboratories in Tarkwa, which are independent from Golden Star, using a 1,000 gram slurry of sample and tap water which is prepared and subjected to an accelerated cyanide leach (LEACHWELL). The sample is then rolled for twelve hours before being allowed to settle. An aliquot of solution is then taken, gold extracted into Di-iso Butyl Keytone (DiBK), and determined by flame Atomic Absorption Spectrophotometry (AAS). Detection Limit is 0.01 ppm.

All analytical work is subject to a systematic and rigorous Quality Assurance-Quality Control (QA-QC). At least 5% of samples are certified standards and the accuracy of the analysis is confirmed to be acceptable from comparison of the recommended and actual "standards" results. The remaining half core is stored on site for future inspection and detailed logging, to provide valuable information on mineralogy, structure, alteration patterns and the controls on gold mineralization.