VANCOUVER, Sept. 4, 2018 /CNW/ - GOLDCORP INC. (TSX: G, NYSE: GG) ("Goldcorp" or the "Company") is pleased to report significant progress on key permitting and project milestones which will contribute both to our five-year 20/20/20 plan to increase gold production and gold reserves by 20%, while decreasing all-in sustaining costs per ounce by 20%, and to our Beyond 20/20 growth opportunities. 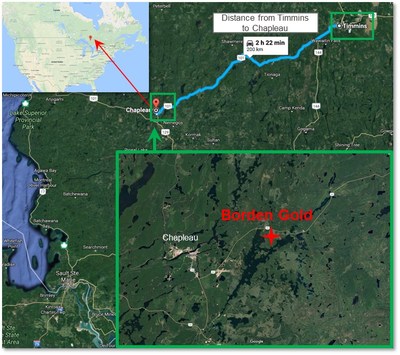 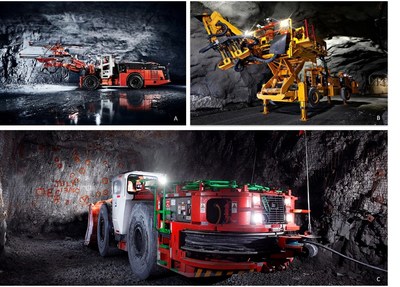 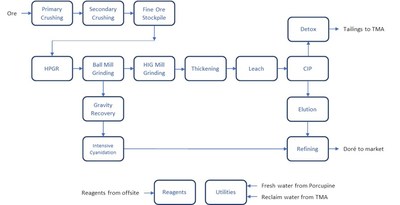 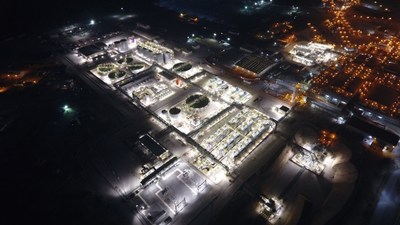 "We continue to be impressed with our team's execution as we advance projects on time and on budget through the permitting and development process", said David Garofalo, President and Chief Executive Officer of Goldcorp. "Goldcorp provides its shareholders with meaningful value growth opportunities over the next decade with reserve and production growth and declining costs from existing mines, and the strongest pipeline of potential large-scale new mines."

Goldcorp will hold a conference call related to our permitting updates and for Responsible Investors and environmental, social and governance (ESG) analysts on Thursday, September 6, 2018 at 11:00 a.m. Eastern time / 8:00 a.m. Pacific time to discuss its ESG practices, and sustainability goals described in the Company's 2017 Sustainability Report. Dial-in and webcast details are available on our website.

At Borden (100% owned, Canada), all mine infrastructure to support production is in place. Ramp development has now reached approximately 1.6 km in length with a depth of 300 m, and is on schedule.

The bulk sample extraction began in August, two months ahead of schedule, with a first zone of extraction on levels 225 and 240.  The continuation of the exploration ramp is leading toward level 420 m, which will be the final phase of the bulk sample program. In 2018, the bulk sample extraction will de-risk the project and allow for recovery of 4,000 ounces of gold, as well as learning and confirming the main characteristics of the ore body such as rock stability, geology and recoveries.

All operating permits are expected to be obtained by the fourth quarter of 2018, allowing an increased pace of development along with construction of the remaining critical mine infrastructure including ventilation raise and secondary egress for the operation. Permit applications for industrial sewage, air and water have been through the 30-day Environmental Registry phase and are currently being finalized. The next milestone will be receiving acceptance of the mine closure plan, expected 45 days after the August 22, 2018 submission.

The mine is expected to begin commercial production, as planned, in the second half of 2019. Borden is focused on using new technologies, including mine electrification and full connectivity, with the goal of increasing efficiency and enhancing safety. Currently, the exploration ramp is using mainly electric vehicles. The fleet is composed of state of the art mining equipment, automated battery/electric jumbos and battery bolters. All services vehicles are electrified, including a conventional grader which was converted into a battery-operated unit.

As a leader in mining innovation and adopter of clean technology, Goldcorp has sought partnerships with suppliers, Government, First Nations, associations and other mining companies. For example, the Government of Ontario has agreed to invest $5 million into the deployment of the all-electric fleet through its target greenhouse gas program.

With all-electric underground mine operations, Goldcorp estimates that operating costs will be reduced by over $9 million per year due to the elimination of approximately two million litres of diesel fuel, and with reduced ventilation needs, a decrease of approximately 32,000 MWh of electricity and a corresponding decrease in propane required to heat the ventilation. Importantly, we expect a reduction in annual green house gas emissions of more than 7,000 tons, or a seventy per cent reduction over a baseline mine.

Century Prefeasibility Nears Completion and its Associated Project Description Has Been Submitted.

The Century (100% owned, Canada) prefeasibility study is on schedule to be completed in the fourth quarter of 2018 and the feasibility study by the first quarter of 2020. The submitted Project Description has successfully met the criteria for the Prescribed Information for a Description of a Designated Project Regulation, in accordance with the Canadian Environmental Assessment Agency (CEAA) 2012 requirements and is now undergoing a 20-day public comment period. Baseline field studies and modelling are underway to support the permitting process.

A series of trade-off studies to improve mining and processing efficiencies were completed to present the single go forward option which then became the basis for the prefeasibility study. Trade-off studies completed included: truck and shovel capacity, co-mingling of tailings with waste rock (Eco-Tails), filtered tails, thickened tails, conveying of rock from the pit, autonomous haulage and optimized process plant design.

The Coffee Gold Project (100% Owned, Canada) has been deemed adequate by the Yukon Environmental and Socio-economic Assessment Board (YESAB) in August 2018. This is positive step forward though the first stage of the permitting process outlined within the Yukon Environmental and Socio-economic Assessment Act (YESAA). Public consultation begins immediately.

The Coffee Gold Project continues to advance engineering, exploration and permitting activities with production expected to commence in 2021.

On April 30, 2018, Goldcorp and Tr'ondëk Hwëch'in (TH) announced that the parties had entered into a Collaboration Agreement relating to the Coffee gold project. The Agreement represents a significant milestone towards building a long-term relationship and is a critical step towards delivering economic opportunities for TH and its citizens through the development of the Coffee Gold Project in the Yukon.

At Peñasquito (100% owned, Mexico), the Pyrite Leach Project is now fully constructed and is undergoing pre-commissioning together with area-based commissioning. First gold and commercial production are expected in the fourth quarter of 2018.

The Carbon Pre-flotation component of the project is now allowing Peñasquito to process ore which was previously considered uneconomic, including significant amounts already in stockpiles. The project was completed under budget in the second quarter of 2018 and has been operational since May 2018. With a focus on safety and reliability, PLP has been delivered with zero Lost Time Incidents and an All Injury Frequency Rate of 0.09.

Goldcorp is a senior gold producer focused on responsible mining practices with safe, low-cost production from a high-quality portfolio of mines.

Scientific and technical information contained in this news release was reviewed and approved by Ivan Mullany, FAusIMM, Senior Vice President, Technical Services for Goldcorp, and a "qualified person" as defined by National Instrument 43-101 – Standards of Disclosure for Mineral Projects.

This press release contains "forward-looking statements" within the meaning of Section 27A of the United States Securities Act of 1933, as amended, Section 21E of the United States Exchange Act of 1934, as amended,  the United States Private Securities Litigation Reform Act of 1995, or in releases made by the United States Securities and Exchange Commission, all as may be amended from time to time, and "forward-looking information" under the provisions of applicable Canadian securities legislation, concerning the business, operations and financial performance and condition of Goldcorp. Forward-looking statements include, but are not limited to, the future price of gold, silver, zinc, copper and lead, the estimation of mineral reserves and mineral resources, the realization of mineral reserve estimates, the timing and amount of estimated future production, costs of production, targeted cost reductions, capital expenditures, free cash flow, costs and timing of the development of new deposits, success of exploration activities, permitting and certification time lines, hedging practices, currency exchange rate fluctuations, requirements for additional capital, government regulation of mining operations, environmental risks, unanticipated reclamation expenses, health, safety and diversity initiatives, timing and possible outcome of pending litigation, title disputes or claims and limitations on insurance coverage. Generally, these forward-looking statements can be identified by the use of words such as "plans", "expects" , "is expected", "budget", "scheduled", "estimates", "forecasts", "intends", "anticipates" , "believes", or variations or comparable language of such words and phrases or statements that certain actions, events or results "may", "could", "would", "should", "might" or "will", "occur" or "be achieved" or the negative connotation thereof.

Forward-looking statements are necessarily based upon a number of factors and assumptions that, if untrue, could cause the actual results, performances or achievements of Goldcorp to be materially different from future results, performances or achievements expressed or implied by such statements. Such statements and information are based on numerous assumptions regarding Goldcorp's present and future business strategies and the environment in which Goldcorp will operate in the future, including the price of gold, anticipated costs and ability to achieve goals. Certain important factors that could cause actual results, performances or achievements to differ materially from those in the forward-looking statements include, among others, gold price volatility, discrepancies between actual and estimated production, mineral reserves and mineral resources and metallurgical recoveries, mining operational and development risks, litigation risks, regulatory restrictions (including environmental regulatory restrictions and liability), changes in national and local government legislation, taxation, controls or regulations and/or change in the administration of laws, policies and practices, expropriation or nationalization of property and political or economic developments in Canada, the United States, Mexico, Argentina, the Dominican Republic, Chile or other jurisdictions in which the Company does or may carry on business in the future, delays, suspension and technical challenges associated with capital projects, higher prices for fuel, steel, power, labour and other consumables, currency fluctuations, the speculative nature of gold exploration, the global economic climate, dilution, share price volatility, competition, loss of key employees, additional funding requirements and defective title to mineral claims or property. Although Goldcorp believes its expectations are based upon reasonable assumptions and has attempted to identify important factors that could cause actual actions, events or results to differ materially from those described in forward-looking statements, there may be other factors that cause actions, events or results not to be as anticipated, estimated or intended.

Forward-looking statements are subject to known and unknown risks, uncertainties and other important factors that may cause the actual results, level of activity, performance or achievements of Goldcorp to be materially different from those expressed or implied by such forward-looking statements, including but not limited to: future prices of gold, silver, zinc, copper and lead; mine development and operating risks; possible variations in ore reserves, grade or recovery rates; risks related to international operations, including economic and political instability in foreign jurisdictions in which Goldcorp operates; risks related to current global financial conditions; risks related to joint venture operations; actual results of current exploration activities; actual results of current reclamation activities; environmental risks; conclusions of economic evaluations; changes in project parameters as plans continue to be refined; failure of plant, equipment or processes to operate as anticipated; accidents, labour disputes and other risks of the mining industry; risks associated with restructuring and cost-efficiency initiatives; delays in obtaining governmental approvals or financing or in the completion of development or construction activities; risks related to the integration of acquisitions; risks related to indebtedness and the service of such indebtedness, as well as those factors discussed in the section entitled "Description of the Business – Risk Factors" in Goldcorp's most recent annual information form  available on SEDAR at www.sedar.com and on EDGAR at www.sec.gov. Although Goldcorp has attempted to identify important factors that could cause actual results to differ materially from those contained in forward-looking statements, there may be other factors that cause results not to be as anticipated, estimated or intended. There can be no assurance that such statements will prove to be accurate, as actual results and future events could differ materially from those anticipated in such statements. Accordingly, readers should not place undue reliance on forward-looking statements. Forward-looking statements are made as of the date hereof and, accordingly, are subject to change after such date. Except as otherwise indicated by Goldcorp, these statements do not reflect the potential impact of any non-recurring or other special items or of any disposition, monetization, merger, acquisition, other business combination or other transaction that may be announced or that may occur after the date hereof. Forward-looking statements are provided for the purpose of providing information about management's current expectations and plans and allowing investors and others to get a better understanding of Goldcorp's operating environment. Goldcorp does not intend or undertake to publicly update any forward-looking statements that are included in this document, whether as a result of new information, future events or otherwise, except in accordance with applicable securities laws.