MOSCOW, March 18, 2019 /CNW/ -- The seventh season of the International Children's Social Programme Football for Friendship starts today by Gazprom Company, official partner of the UEFA Champion's League. The final events will be taking place in Madrid, the capital of Spain, from May 28 up to June 02. The Programme's main aims are to support children's and youth sports, to promote values of a healthy and active lifestyle as well as to nurture the youth to respect different nationalities and cultures. 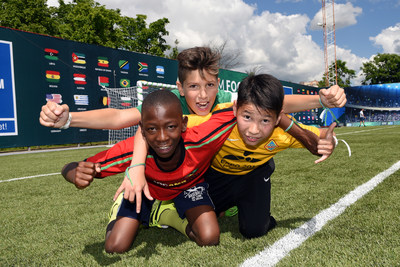 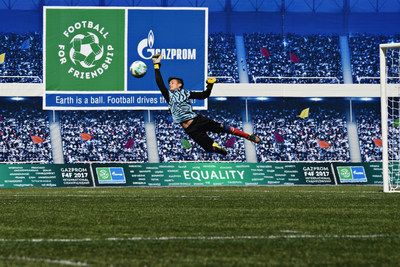 Boys and girls including those with disabilities and special needs annually participate in the Football for Friendship promoting the Nine Values of the Programme: friendship, equality, fairness, health, peace, devotion, victory, traditions, and honour.

During the seventh season of the Football for Friendship, the events will be organized in different countries of the world. The composition of mixed International Teams of Friendship will be determined during the Open Draw. Associating with an environmental mission of the Programme, the Teams will be named after rare and endangered species of animals. The world will also celebrate the International Day of Football for Friendship, children and adults from different countries will support the Programme, participate in the Matches of Friendship and open lessons, and tie the Friendship Bracelets – official symbol made from blue and green threads objectifying the peaceful sky above and the colour of a football field.

Young Journalists from all over the planet will try their hands at the International Children's Press Centre covering events of the Football for Friendship's new season. The youth will acquire necessary skills of a reporter and have a chance to use them during the final events as well as cooperate with the leading media of the world in the capacity of string correspondents.

Not only Journalists, Players and Coaches but also Young Referees – pupils of referee schools from different countries - will represent this year Programme's Young Participants. All of them will become a part of the International Friendship Camp for a couple of days and will participate in different sport and educational events: workshops from famous football players, trainings under Young Coaches' guidance as well as master classes and games within the Nine Values School framework.

During the final events, the International Football for Friendship Forum will take place, and the Football for Friendship World Championship will become the central event with its final held in the very heart of Madrid – at the Plaza Mayor square. The seventh season will end with the participants of closing events visiting the final match of the 2019 UEFA Champion's League at Wanda Metropolitano stadium in Madrid.

"The Football for Friendship Programme Implemented by Gazprom Company cultivates universal human values in the younger generation through sports, winds the barriers down and gives youth a chance to find a mission and get their voice heard. This Programme provides an opportunity to work in a cross-cultural atmosphere thus contributing to the development of a global sport society," says Miquel Puig, Owner&CEO of Soccer Barcelona Youth Academy.

According to Ananya Kamboj, a Young Journalist from India (15 y.o.): "The Football for Friendship Programme, thanks to its global reach, unprecedented popularity and positive values embedded in it, is certainly a powerful instrument, which not only helps to destroy social and economic barriers but also helps us understand ourselves and others around us."

The International Children's Social Programme Football for Friendship has been implemented by Gazprom since 2013. The main values promoted by the Programme participants are friendship, equality, fairness, health, peace, devotion, victory, traditions, and honour. The Football for Friendship is supported by UEFA, FIFA, International Olympic Committee, football federations of different countries, children's international charities, famous athletes and leading football clubs of the world. For the previous six seasons, the Programme has brought more than 5,5 thousand participants together and acquired over 4,5 million followers including famous athletes, artists and politics.

Official Internet resources of the Programme:

You can scan our Nametag to find us on Instagram @footballforfriendship