TORONTO, Jan. 10, 2018 /CNW/ - First Cobalt Corp. (TSX-V: FCC, ASX: FCC, OTCQB: FTSSF) (the "Company") is pleased to announce positive assay results from two holes intersecting cobalt mineralization on two separate veins in the Woods Extension area of the Cobalt Camp, Ontario. One intersection occurs along strike of the Watson vein and the other is likely a new vein between the Woods and Watson veins. These intercepts, in conjunction with previous results from this area, suggest a broad deformation zone of mineralization may exist between the Woods and Watson veins. 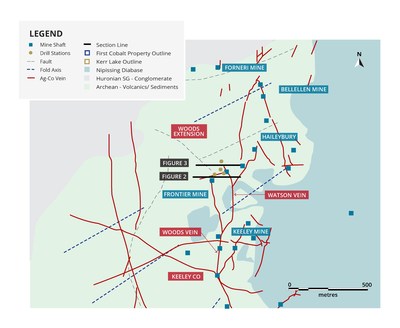 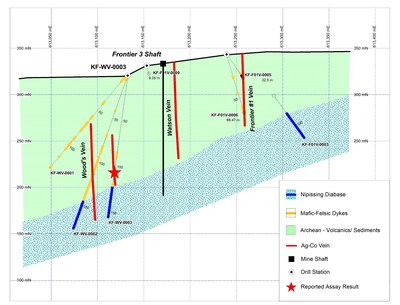 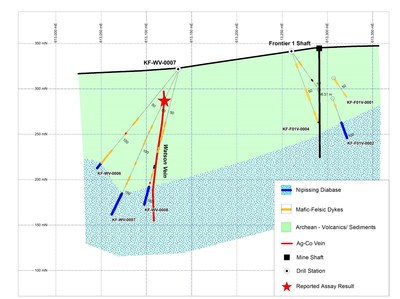 "Drill results from Woods Extension continue to prove exciting during these early days of our Cobalt Camp drilling. All drill holes in this area have hit meaningful values of cobalt or other metals and the mineralization is open along strike northward. It is noteworthy that cobalt mineralization has been intersected to the north and south of the historic Keeley and Frontier mines, where the focus was silver mineralization."

The Woods and Watson veins accounted for over 80% of the production in the southern end of the Cobalt Camp area known as Silver Centre. The veins were previously believed to have ended at an east-west fault. Assays in this area, however, show the vein system extends northward beyond the historic mine workings, in an area previously unexplored (Figure 1).

Nine drill holes were completed at the Woods Extension area to the north of the Frontier mine to test the possible extension of the Woods and Watson veins. Assay results have been received from seven drill holes. Calcite veins have been intersected in most holes and five holes returned anomalous cobalt (>0.05% Co). A number of samples from these five drill holes have also returned anomalous silver (>10 g/t) as well as other metals Cu, Zn and Pb, which may represent a broad zone of mineralization rather than discrete individual veins. The lower grade of silver mineralization may explain the lack of mine development to the north of the historic Frontier mine, but this area remains prospective for cobalt mineralization.

Hole KF-WV-0003 intersects a calcite vein containing cobalt occurring between the Woods and Watson Veins (Figure 2), including 0.57% Co and 1.4% Ni over 0.4m. The higher grade nickel is noteworthy as this has not been described previously in this area. Elevated nickel is commonly associated with cobalt-silver mineralization elsewhere in the Cobalt Camp suggesting this vein may be part of a network developed in a broad deformation zone between these two major veins.

Early results from hole KF-WV-0002, which is collared at the same station as KF-WV-0003, were reported November 2, 2017. Further interpretation of KF-WV-0002 indicate an intersection of the Woods Vein at 111.9m, where cobalt was assayed above (>0.05% Co) and below (0.03% Co) historic mine workings, thereby providing support to the view that KF-WV-0003 encountered a new vein.

KF-WV-0007 to the north KF-WV-0003, returned 0.34% Co over 0.4 metres (Figure 3). Hole KF-WV-0008, which was reported November 2, 2017, is collared from the same station as KF-WV-0007 and contains 0.83% Co and 30 g/t Ag over 0.48 metres. These two intersections are believed to be part of the Watson Vein. Multiple holes were collared from the same drill station in many locations during this program to determine the dip of the major veins within the Keeley-Frontier mines. Although only a few intersections are now interpreted in this area, the Watson vein does appear to bend around mafic and felsic dykes, therefore could easily have been missed by mining along a single narrow drift.

Potential for further mineralization north of the Keeley-Frontier mine remains high.

The strike extension and dip orientation of the Woods and Watson veins had been assumed from the location of the mine workings prior to drilling. Based on logging of these nine holes and the current assay results, several carbonate veins have been intersected suggesting either a broad deformation zone, where a cluster of cobalt veins have developed or that the Woods and Watson Veins are not linear as historical records indicate.

First Cobalt has completed 61 holes in its maiden drill campaign in the Ontario Cobalt Camp. The initial diamond drilling program was designed to test vein sets mapped in outcrop in ten areas known to be cobalt-rich over a two kilometre strike length encompassing the past producing Keeley, Frontier, Haileybury and Bellellen mines.

First Cobalt previously reported assay results confirming the presence of three cobalt bearing veins to the southwest of the Keeley mine. Drill hole KF-KD-0005, reported December 19, 2017, intersected three different cobalt veins including 0.12% Co over 5.50m in the Woods vein, >1.00% Co over 0.42m, pending over-range assays, in the KeeleyCo#1 vein and 0.60% Co over 0.38m in the KeeleyCo#2 vein. KeeleyCo#1 and KeeleyCo#2 veins are interpreted as parallel structures to the Woods vein. Zinc and lead intersected as part of a hydrothermal halo around the vein systems provides another example of previously unknown metal zoning now seen elsewhere in the Cobalt Camp.

At Frontier 1, results from five of nine holes included a previously reported new silver-bearing vein grading 27.75 g/t Ag and 0.10% Cu over 9.53 metres, as reported November 2, 2017. Assay results from other holes along the Frontier 1 vein encountered anomalous cobalt (>0.05%) and results from the other drill holes are pending.

For a table of drill hole locations and assay results to date, visit https://firstcobalt.com/projects/greater-cobalt-project.

The 2017 drill program was designed to test structures to learn more about vein orientations and determine the grades in the host rocks to known Ag-Co calcite veins and in the veins themselves. 2017 surface sampling results from Drummond, Juno and Silver Banner mines in Cobalt North, the Caswell mine in Cobalt Central and the Bellellen mine in Cobalt South, together with 2017 drilling assays have been integrated into First Cobalt's geological model to plan the 2018 drill program.

First Cobalt has implemented a quality-control program to comply with common industry best practices for sampling and analyses. Samples are collected from drill core from a range of 30 to 100cm length. Half-core samples are submitted for analyses. Standards and blanks are inserted every 20 samples. Duplicates are made from quarter core splits every 20 samples. Geochemical data were received from AGAT Laboratories in Mississauga, Ontario, Canada. No QA/QC issues have been noted. AGAT Laboratories has used a sodium-peroxide fusion and ICP finish for analyses on all samples.

Anomalous cobalt is defined as >0.05% which reflects over 10 times values above average mafic volcanic rock and diabase within the Keeley-Frontier mine area. Silver values in these rocks are typically below detection limits (1 gram per tonne), so a value of 10 gpt is considered here to represent an anomalous threshold.