TORONTO, Jan. 15, 2020 /CNW/ - First Cobalt Corp. (TSX-V: FCC; OTCQX: FTSSF) (the "Company") is pleased to announce a new high-grade mineral resource estimate for the Iron Creek Project in Idaho, USA. In 2019, First Cobalt completed an infill drill program focused on converting Inferred Resources to Indicated Resources, resulting in a 49% conversion to the Indicated category and a 12% increase in contained cobalt metal while maintaining the average grade. The deposit is one of the few primary cobalt deposits in America and remains open along strike and down-dip. 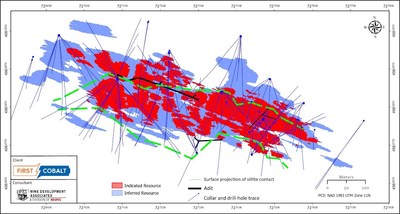 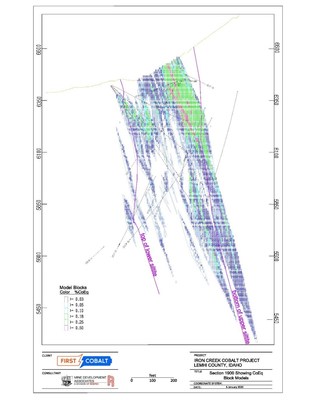 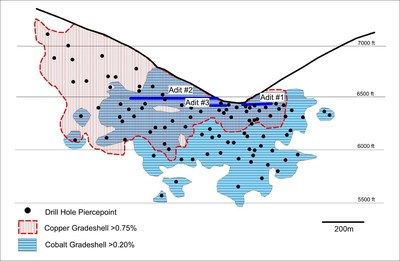 "Results of the infill drilling campaign exceeded our expectations and confirms that we have a continuous deposit. Future work will include drilling along strike and at depth to add tonnes as well as geophysical surveys to understand the potential of other nearby targets, including the Ruby Zone. Primary cobalt deposits are exceptionally rare around the world and we have a large and growing resource in America, where sourcing critical minerals is a priority. Identifying future sources of this critical mineral is a growing priority worldwide for both industrial and strategic purposes.

In 2020, our primary focus will be to recommission the First Cobalt Refinery in Ontario, where we expect to complete two feasibility studies before the end of the quarter. Pending the results of those studies, we will then work towards recommissioning the Refinery by Q4 2020."

The most recent drill campaign and interpretation of results has led to a new cobalt-copper model containing both Indicated and Inferred Resources at Iron Creek considered to be amenable to underground mining extraction (Figure 1). Drilling was successful demonstrating a single mineralized horizon continuous along strike and down-dip.

As the cobalt market began to show signs of short-term weakness, the Company chose to focus on infill drilling which was more cost effective given that several holes could be drilled from a single drill station. Several drill stations were nonetheless constructed for step-out drilling along strike and these were successful at intersecting cobalt-copper mineralization without closing off future strike potential.

A total of 49% of the maiden resource is now in the Indicated category and contained cobalt increased by 12%. Compared to many other base metal deposits, it is notable that the resource grade did not decrease as the resource was drilled on a tighter spacing, providing confidence in the continuity of mineralization over large widths.

An extensive re-evaluation of drill core found that Iron Creek mineralization occurs as lenses and pods of pyrite, the dominant phase hosting cobalt, that are primarily concordant to the sedimentary layering in the host rocks. Chalcopyrite, the only copper mineral phase, is disseminated and also occurs as stringers cutting pyrite mineralization. Spatially, cobalt and copper geochemical results do not correlate due to this geological relationship. As a result, cobalt and copper domains were modelled separately.

The deepest drill hole completed in the latest program, 610m from surface, has shown mineralization extends beyond 600m down dip providing targets for further drilling.

Longer drill holes from the stratigraphic hangingwall have consistently intersected a thick (over 75m) bedded siltite unit providing a marker contact to stratigraphy. Mineralization is mainly associated with the occurrence of quartzite layers interbedded with siltite. Drill holes intersecting the metasedimentary sequence below mineralization show quartzite layers are sparse and a siltite unit containing siderite porphyroblasts locally marks the footwall.

Surface holes at the western portion of the resource confirmed the extension and continuity of higher-grade copper mineralization, greater than 0.75% (Figure 3). Chalcopyrite stringers are also found in the stratigraphic hangingwall that represent the discordant nature of copper mineralization and may be targeted in future exploration programs.

Comparison to the 2018 Resource Model

A maiden resource estimate release in September 2018 reported only Inferred Resources. The most recent drilling program provided data from an additional 43 surface and underground holes totaling 13,434m and represent a 47% increase in meterage. This additional drilling permitted reporting Indicated Resources.

The 2018 report favoured a base mining scenario of combined open pit and underground excavation. The 2018 report considered lower-grade cobalt-copper mineralization near surface for potential open pit mining methods. This updated report considers underground extraction may be more effective since the deeper drilling has shown mineralized extensions down-dip and remain open for further exploration.

A cutoff grade of 0.18% CoEq was considered appropriate for an underground scenario in the 2018 report and is also used in the current report, so a direct comparison between the resource estimates can be made.

The resource estimate was prepared in accordance with the Canadian Institute of Mining, Metallurgy and Petroleum (CIM), CIM Standards on Mineral Resources and Reserves, Definitions and Guidelines prepared by the CIM Standing Committee on Reserve Definitions and adopted by the CIM Council and reported in accordance with the National Instrument 43-101 Standards of Disclosure for Mineral Projects by Mr. Steven J. Ristorcelli, C.P.G., Principal Geologist for Mine Development Associates ("MDA") in Reno, Nevada and a Qualified Person under NI 43-101.

The updated Mineral Resource estimate is based on geological and structural data from 105 diamond drill holes for a total of 28,563 metres and approximately 21,500 geochemical samples completed by FCC between 2017 and 2019 (Figure 1). All data used for the estimation were generated by First Cobalt; no historical data were included.

Technical and economic factors likely to influence the "reasonable prospects for eventual economic extraction" were evaluated using the best judgement of the Qualified Person. Potential for underground mining was assessed by initially running stope optimizations using mining costs, processing costs, and anticipated metallurgical recoveries for similar size operations in the western United States, and then updating these by building grade shells around continuously mineralized zones that could support underground extraction.

The effective date of the report is November 27, 2019, and it will be filed on SEDAR within 30 days of this press release and will be posted on the Company website at www.firstcobalt.com. The estimate and report were completed by Mine Development Associates ("MDA") in Reno, Nevada.

Infrastructure constructed for the 2018-19 resource drilling program is suitable for new drilling stations to test extensions of the Iron Creek cobalt-copper mineralization minimizing cost of the follow-up program.

Surface mineralization has been identified at the Ruby prospect approximately 1.5km from the Iron Creek resource (see October 30, 2019 press release). Surface channel samples returned up to 0.24 % Co over 10.7m of strike continuity. Ruby and other surface exposures of mineralization will be targeted for drilling and other work.

Downhole electromagnetic geophysical surveys have indicated both cobalt and copper mineralization are relatively conductive and may be detected by ground or airborne techniques. Follow-up surveys are planned to optimize drill hole targeting along strike of Iron Creek and elsewhere on the property.

A systematic surface mapping and prospecting program is also recommended based on the new understanding of the lithological controls on the Iron Creek mineralization. Regional structures are known to exist on the property, but the controls on possible mineralization extensions to Iron Creek and other surface cobalt-copper prospects require additional work.

Baseline environmental studies initiated in 2017 will progress to facilitate future exploration programs as well as provide data for mine permitting. Further metallurgical studies to optimize cobalt extraction are also being considered.

Iron Creek is located within First Cobalt's Idaho property, which consists of mining patents and exploration claims covering an area of 1,698 acres. Historic underground development at Iron Creek includes 600 metres of drifting from three adits. An all-weather road connects the property to a state highway and nearby towns, Challis and Salmon. Significant infrastructure is in place to support multiple drills and underground activity.

Iron Creek is one of many cobalt-copper resources and prospects within the Idaho Cobalt Belt. Mineralization-style throughout the Belt is considered to be stratabound meta-sedimentary rock hosted. The United States Geological Survey deems these resources in Idaho to be strategically important as a domestic supply of cobalt.

The technical content of this press release that relates to the resource estimate has been reviewed and approved by Steven J. Ristorcelli, C.P.G., P.G. of Mine Development Associates. Dr. Frank Santaguida, P.Geo., Vice-President of Exploration for the Company, has reviewed and approved this press release. Both are Qualified Persons as defined by National Instrument 43-101.

First Cobalt is a North American cobalt company and owner of the only permitted primary cobalt refinery in North America. The Company is exploring a restart of the First Cobalt Refinery in Ontario, Canada, which could produce over 25,000 tonnes of cobalt sulfate per year from third party feed. First Cobalt's main cobalt exploration project is the Iron Creek Cobalt Project in Idaho, USA, which has an Inferred and Indicated mineral resource estimate available on the Company's website. The Company also controls a significant land package in the Canadian Cobalt Camp spanning over 100 km2, which contains more than 50 past producing mines.