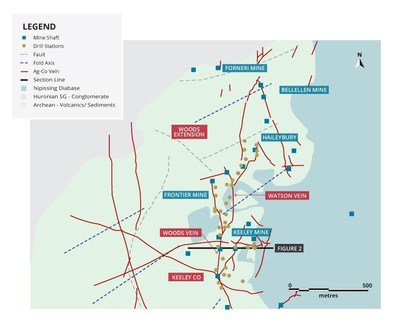 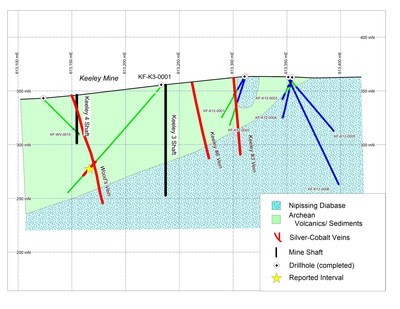 "These results are very encouraging as further validation of our view that the Cobalt Camp material previously believed to be barren does in fact host disseminated material amenable to a bulk tonnage operation. We are in the early days of our drill campaign and these results demonstrate the potential for long cobalt and silver drill intercepts outside the historically mined vein systems."

First Cobalt's drilling near the historic Keeley mine intersected a significant interval of 13.7 metres grading 106.2 g/t silver along the Woods Vein. Anomalous silver (up to 11.3 g/t Ag over 1.0m) was also encountered over an additional 4.0m above this interval and 7.0m immediately below, indicating the presence of a broad style of mineralization in material historically considered insignificant (Table 1).

Within the interval, background cobalt values of up to 0.03% Co are present but base metals are generally low. Cobalt was intersected 200m further south along the Woods Vein with grades of 0.12% Co over 5.5m as well as in veins to the west containing up to 1.15% Co and 0.55% Ni over 0.42m (see December 19, 2017 press release). This suggests a possible metal zoning pattern of cobalt-rich and silver-rich mineralization may be present. This zonation can be predicted and applied to future drill targeting.

First Cobalt commenced its maiden dill campaign in late 2017 and has received assays from approximately half of its 6,500m program. In 2018, the Company has planned a 26,500 metre program to test 13 mineralized areas throughout the Cobalt Camp with known historical production of cobalt and silver. These areas include the Kerr, Drummond, Juno, Ophir, Hamilton, Silver Banner and Silverfields mines in Cobalt North, the Caswell mine in Cobalt Central, along with the Bellellen, Keeley and Frontier mines in Cobalt South.

The mineralized interval starts at 93.6m downhole depth, approximately 70m below surface, and pierced a 2m void where the Woods Vein was previously mined. Silver mineralization extends into the footwall to 112.5m and anomalous silver occurs for a further 7.0m below. This footwall zone represents mineralization left behind in wallrocks (Figure 2). This intercept signifies a broad mineralization style not previously recognized and reflects the historic focus on only high grade silver veins.

* Length corresponds to measured interval along drill core. A 2m void was encountered at 95.6m and is not considered in the weighted average calculation.

The 2017 drill program focused on the areas around the Keeley and Frontier mines, including the Woods and Watson veins. These two accounted for over 80% of the silver production in the southern end of the Cobalt Camp area known as Silver Centre. To date, the drilling campaign by First Cobalt has identified cobalt-silver-nickel veins that are considered to be an extension of the Woods Vein to the north and parallel structures to the Woods vein in the southern portion of the Keeley Mine (see November 2 and December 19, 2017 press releases).

Drill hole KF-K3-0001 was collared near the Keeley 3 shaft in northern part of the historic Keeley mine (Figure 1). Previous work including bedrock mapping in this area identified stockwork style veining that is considered to be a lateral extension of the Woods Vein. Drilling in this area targeted the Woods Vein with the intention of testing for cobalt and silver in the wallrocks as disseminated or stockwork style mineralization.

In KF-K3-0001, silver mineralization is associated with fine (<1mm) calcite-filled fractures in mafic volcanic rocks. Centimetre-sized calcite veins are also present, but assay results show silver occurs beyond these veins and maybe finely disseminated in the wallrocks. In this area, east-west trending structures were also mined and mapped at surface, indicating the mineralization intersected in KF-K3-0001 may extend westward. Since this mineralization is not readily apparent in the rocks, it would have been easily missed during historic mining that was focused on higher grade silver in calcite veins. Low silver assays (<2 g/t Ag) within the interval are associated a two metre mafic dyke that appears unfractured.

The Cobalt Camp was historically the most prolific cobalt jurisdiction in Canada and home to the largest silver producers worldwide. It is estimated that this mining district produced 50 million pounds of cobalt and 600 million ounces of silver from 1904 to 1985 from 70 different mines. These historic mines focused mainly on high grade silver veins mined in narrow underground operations. First Cobalt's thesis for the Camp is that the application of modern exploration methods, new technology and a view of cobalt through the lens of bulk mining potential may unlock value previously overlooked.

For a table of drill hole assay results to date, visit https://firstcobalt.com/projects/greater-cobalt-project.

First Cobalt has implemented a quality-control program to comply with common industry best practices for sampling and analyses. Samples are collected from drill core from a range of 30 to 100cm length. Half-core samples are submitted for analyses. Standards and blanks are inserted every 20 samples. Duplicates are made from quarter core splits every 20 samples. Geochemical data were received from AGAT Laboratories in Mississauga, Ontario, Canada. No QA/QC issues have been noted. AGAT Laboratories has used a sodium-peroxide fusion and ICP finish for analyses on all samples. Silver grades reported here were analysed using a three acid digestion and ICP finish.