TORONTO, June 19, 2018 /CNW/ - First Cobalt Corp. (TSX-V: FCC; ASX: FCC; OTCQX: FTSSF) (the "Company") is pleased to announce that drill results from the Iron Creek Project in Idaho, USA continue to extend cobalt mineralization in the Waite Zone by an additional 50 metres to the west as well as to surface. The Waite Zone lies south and parallel to the historic No Name Zone. Mineralization has also been intercepted beyond the footwall of the Waite Zone, providing new targets for future drilling. 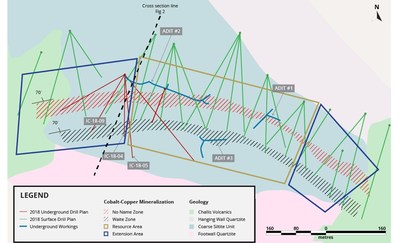 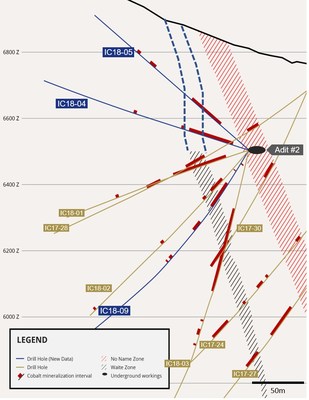 "The outlook for the cobalt market remains strong even though the market has taken a pause. Although lithium, cobalt and graphite stocks are down over the past three months, assertions that cobalt will soon be replaced in electric vehicles cannot be substantiated. The growing EV market will underpin a well-supported view that cobalt production will remain in a deficit position in the years ahead.

These results show that the Waite Zone mineralization contains strike length similar to the No Name Zone and likely extends to surface. The Iron Creek Project results in Idaho have been very compelling and the expanded program on our patented land package will allow us to unlock value at an accelerated pace. First Cobalt has a strong treasury and is well positioned as a vertically integrated North American cobalt pure play."

The 2017 drilling was completed to confirm a historic estimate (non-compliant with NI 43-101) of 1.3 million tons grading 0.59% cobalt and 0.3% copper done in 1980 by Noranda Inc. That program covered a 460 metre strike length, primarily in the No Name Zone, and the results are the basis for a mineral resource estimate expected to be completed by October of 2018. First Cobalt is now undertaking a 70-hole, 30,000 metre drill program designed to double the strike length of the cobalt-copper mineralized zone to 900 metres.

Results reported today were completed from underground, in the western-most extent of Adit #2 (Figure 1) and specifically targeted the lesser known Waite Zone, which did not form part of the historic resource estimate. Each hole encountered significant mineralization, further extending the drilled strike length and the up-dip extension of cobalt mineralization and providing confidence to continue drilling to the west.

Drilling continues to expand the total cobalt metal content and size potential of the Iron Creek mineralization as indicated by substantial true widths of cobalt mineralization.

Two of the holes successfully tested the up-dip extension of the Waite Zone, which is now believed to come to surface in this area (Figure 2). Lower grade mineralization was also intersected between the No Name and Waite Zones.

Results demonstrate the continuity of the dip extension of the Waite Zone (Figure 2). Cobalt mineralization occurs as semi-massive and disseminated styles similar to what was drilled further east and similar in style to the No Name Zone. The Waite Zone in this area is relatively thick and is consistently mineralized containing a few high grade cobalt values, up to 1.23% Co over 1.40m in IC18-05 (Table 1). Copper grades within the Waite Zone in this area are also high, up to 3.66% Cu over 0.3m in IC18-09, but not always coincident with cobalt.

Drilling in the footwall to the Waite Zone has encountered other intervals of cobalt mineralization. Intercepts of copper mineralization have been drilled that had not previously been known. Additional drilling has been done nearby and assay results are pending.

Previous results from drilling in this area have shown the dip extension of the Waite Zone can be correlated to a depth 200m below Adit #2 (Figure 2). Grades in this area are comparable to those found near Adit #1, where drill density is much greater (Table 2).

On June 11, First Cobalt announced a 30,000 metre, 70-hole program intended to extend the known mineralization along strike and bring a portion of the Inferred Mineral Resource estimate expected in October into a Measured and Indicated Resource estimate. Longer holes will test cobalt-copper mineralization intersected by 2017 drilling in the footwall, which may extend to surface. Drilling will also test the down dip extension of mineralization below the existing underground adits.

Drilling began in February from the western-most extent of Adit #2 and to date, the program has extended the known mineralization to over 520 meters of strike. Assay results announced today are aligned with the previous results (see US Cobalt press release May 23, 2018 on www.sedar.com).

The Waite Zone is stratigraphically below the No Name Zone and had not been extensively evaluated in the historic exploration work.

The Company also announces the commencement of a preliminary metallurgical study at Iron Creek being conducted by McClelland Laboratories, Inc. ("MLI") in Reno, Nevada to determine optimal concentration methods for cobalt and copper mineralization. The study is under the direction of Jack McPartland, Metallurgist and Vice President, Operations. Bulk samples were collected from underground within Adit #1. Testing of various extraction methods and measures of recoveries will determine which is ideal to concentrate cobalt and copper.

The Iron Creek property is located in the prolific Idaho Cobalt Belt and consists of mining patents and exploration claims with significant infrastructure already in place. Historic underground development includes 600 metres of drifting from three adits and an all-weather road connecting the project to a state highway. All permits are in place for the 2018 drill program.

The true thickness of the No Name Zone and the Waite Zone is between 10m and 30m and dip steeply to the north, remaining open at depth. Historic drilling, pre-1960, traced the No Name Zone for over one kilometre of strike length.

Several inferred resource calculations were made in the 1980s and 1990s by Noranda Inc., Inspiration Mines and Cominco Ltd. These estimates only considered the No Name Zone, where historic drilling was most dense. The most reliable historic resource estimate, which is non-compliant with NI 43-101 reporting standards, is 1.3 million tons grading at 0.59% cobalt and 0.3% copper.