TORONTO, July 19, 2018 /CNW/ - First Cobalt Corp. (TSX-V: FCC; ASX: FCC; OTCQX: FTSSF) (the "Company") is pleased to announce that drilling from underground at the Iron Creek Cobalt Project in Idaho, USA continues to extend mineralization beyond the extents of the historic resource. Results from six drill holes completed at the western extension of the mineralized zones validate previously reported intersections which have, to date, extended the total strike length of the Waite Zone to 520 metres along a dip length of more than 250 metres. 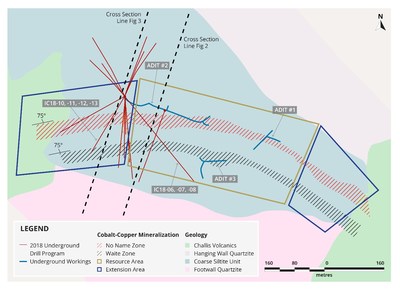 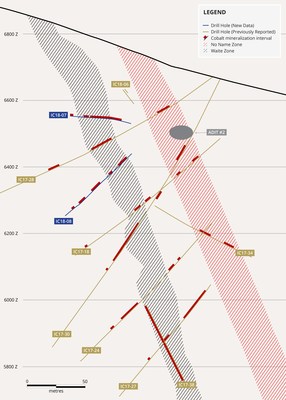 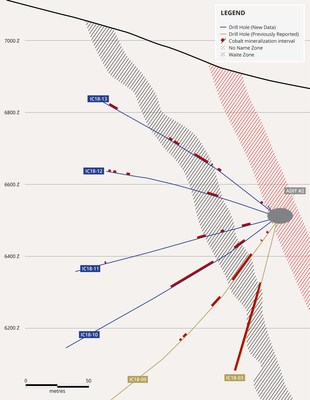 "Drilling continues to extend the strike and dip extent of the Iron Creek Project beyond the boundaries of the maiden resource estimate expected in October. The consistency of cobalt grades across wider widths and the higher copper grades were expected and are encouraging. These results support further testing the western strike extension of Iron Creek for a second resource estimate in early 2019."

First Cobalt's 30,000-metre 2018 drill program for the Iron Creek Project in Idaho, USA is designed to extend the strike length of the mineralized zone to over 1,000 metres and test down dip extensions of known cobalt-copper zones to over 300 metres below surface. The assay results from six holes drilled underground at the western extension of the cobalt-copper mineralized zones infill the strike and dip extensions to mineralization in the western portion of Waite Zone (Figure 1).

An NI 43-101-compliant mineral resource estimate calculation is now underway for the initial resource area drilled in 2017 and early 2018, results of which are expected by October of this year.

Drill holes IC18-07 and IC18-08 were drilled from the western extent of Adit #2, primarily targeting the Waite Zone, and validate results from other holes in this area (Figure 2). Mineralization in this area occurs over broad intervals of up to 35m true widths containing 0.14% Co and 0.20% Cu (Table 2). IC18-07 was drilled above 2017 drill intercepts of the Waite Zone, oriented toward surface. Results indicate that higher-grade cobalt-copper mineralization extends up dip within broader zones of lower grade mineralization.

IC18-08 infills a gap from the 2017 drilling along the western margin of the initial resource area. Mineralization in IC18-08 occurs over intervals that are aligned spatially to the semi-massive mineralization containing higher grades of cobalt as seen in IC18-07 and IC17-30, drilled in the same area.

Cobalt mineralization was also intersected in the footwall of the Waite Zone in both IC18-07 and IC18-08. Similar footwall intercepts were encountered in the 2017 drill holes in this area. Continuity of these intersections between holes along strike will require further testing to determine if a third zone of mineralization is present.

Drill holes IC18–10, IC18–11, IC18–12 and IC18–13 also targeted the Waite Zone and were intended to extend mineralization to the west of previous drilling. The four holes show cobalt-copper mineralization can be traced up dip toward surface from previously reported IC18-09 (Figure 3). The Waite Zone in IC18-09 returned up to 0.38% Co and 0.11% Cu over 3.5m (see June 19, 2018 press release). These intersections confirm the extension of the Waite Zone to the west for a total strike length of 520 metres.

Results from an additional eight holes are pending from the current drill station in Adit #2. Mineralization previously intersected in the hangingwall of the No Name Zone is being targeted. Two holes have also been completed in Adit#2 from a separate drill station further targeting the mineralization intersected in IC18-07 and IC18-08. Currently the underground drill is in Adit #1 to complete infill drilling that will be used for future resource calculations.

The Iron Creek property consists of mining patents and exploration claims with significant infrastructure already in place to support multiple drills and underground activity. Historic underground development includes 600 metres of drifting from three adits and an all-weather road connecting the project to a state highway.

On June 11, First Cobalt announced a $9M program intended to extend the known mineralization along strike and bring a portion of the Inferred Mineral Resource estimate expected in October into a Measured and Indicated Resource estimate. Longer holes will test cobalt-copper mineralization intersected by 2017 drilling in the footwall, which may extend to surface. Drilling will also test the down dip extension of mineralization below the existing underground adits.

Several inferred resource calculations were made in the 1980s and 1990s by Noranda Inc., Inspiration Mines and Cominco Ltd. These estimates only considered the No Name Zone, where historic drilling was most dense.