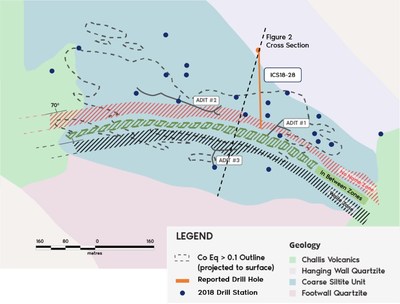 "We have doubled the depth extent of mineralization across the entire deposit and it still remains open. With good continuity of grade and thickness, we can now extend the deposit more quickly and cost-effectively with wider spaced step out holes. The future potential remains high beyond the next resource update as each step-out has shown mineralization remains open at depth and along strike. An updated resource estimate will be published in about a month, incorporating more than 13,000 metres of drilling.

"Confidence is returning to the cobalt market as EV sales continue to set new records in the face of lower mine production forecasts in 2019. Our Iron Creek Project and the near term cash flow potential of the First Cobalt Refinery provide direct exposure for investors seeking leverage to the electric vehicle revolution."

Drilling in the central area of the deposit has infilled much of the central portion of the 2018 resource estimate, which had depth extensions confined to the eastern and western portions of the deposit. This infill drilling and the resulting assays are expected to provide a meaningful increase in mineralization for the upcoming resource estimate expected in late March.

Assay results for ISC18-28 show the No Name Zone occurs as a broad mineralized zone containing a higher grade cobalt core (Table 1). This relationship is consistent with previous drilling higher up, including ICS18-19, ICS18-26, and IC17-19 (reported January 22, 2019 and September 26, 2018). Higher cobalt grade cores within broader mineralization are also prevalent in the Waite Zone in this area.

Drill hole, IC17-39 drilled northward from the hangingwall intersected cobalt mineralization at a comparable depth over 150m away along strike, suggesting continuity to the downdip extension (September 26, 2018 release) intersected in ICS18-28.

Cobalt was also intersected further downhole in ICS18-28 that may correspond to the Waite Zone and mineralization between the two main zones, but no other holes have been drilled to this depth nearby, so follow up is required to determine continuity.

First Cobalt also announces that it has entered into an agreement with an investor on a non-brokered private placement of 11,111,111 units (the "Units") of the Company at a price of $0.18 per Unit for gross proceeds of $2,000,000 (the "Offering"). Each Unit issued pursuant to the Offering will consist of one common share in the capital of the Company and one Common Share purchase warrant (a "Warrant"). Each Warrant entitles the holder thereof to purchase one additional Common Share at a price of $0.27 for a period of two years. The Warrants are subject to an acceleration clause such that, if the closing price of the common shares of the Company is equal to or greater than $0.37 per share for a period of ten consecutive trading days, the Company shall have the option, but not the obligation, to effect an accelerated expiration date that shall be 20 calendar days from the issuance of a notice of acceleration. There is no commission paid to any party as part of the arrangement. Proceeds of the Offering will be used by the Company to support ongoing work at the First Cobalt Refinery as well as general corporate purposes.

Closing of the Offering is expected to occur on or about March 18, 2019 and is subject to receipt of regulatory approvals, including the approval of the TSX Venture Exchange. The securities to be issued under the Offering will have a hold period of four months and one day from their issue. The securities being offered will not be registered under the United States Securities Act of 1933, as amended and may not be offered or sold within the United States absent registration or an exemption from the registration requirements. This news release does not constitute an offer to sell or a solicitation of an offer to buy any of the securities in the United States.

First Cobalt is a North American pure-play cobalt company whose flagship asset is the Iron Creek Cobalt Project in Idaho, USA, which has Inferred mineral resources of 26.9 million tonnes grading 0.11% cobalt equivalent, which has an alternative underground-only scenario of 4.4 million tonnes grading 0.3% cobalt equivalent. The Company also owns the only permitted primary cobalt refinery in North America. The refinery is currently on care and maintenance and the Company is exploring a potential restart of the Refinery, which has the potential to produce 2,000 tonnes of cobalt material per year.