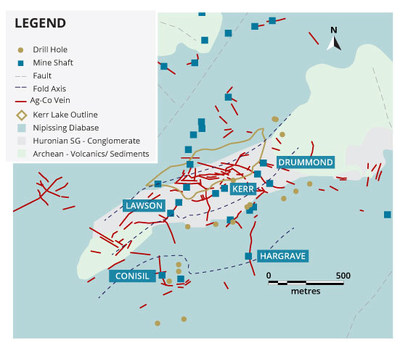 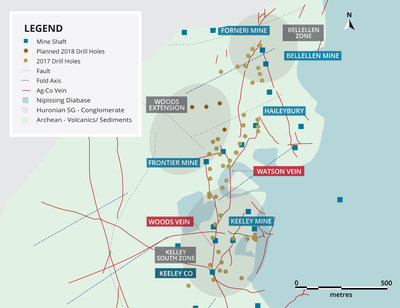 "In our first drill campaign, we successfully identified three distinct cobalt mineralized zones in Cobalt South that warrant follow up. As we focus on Cobalt North for the second leg of the winter drill campaign, we have combined a rich set historical data with our own field work to build a 3D geological model. In Cobalt North, we have several opportunities to identify resources in different styles of mineralization that would not have been considered historically. We believe this program will increase our options to find new cobalt resources in the Camp."

Following a successful maiden drill program in Cobalt South, First Cobalt has initiated drilling in Cobalt North, with the first target area near the Drummond, Kerr and Conisil mines. Historic records indicate these three mines produced nearly one million pounds of cobalt and over 36 million ounces of silver in an era when silver was the primary focus.

The initial drill program in Cobalt North will consist of 16 drill holes for a total of 3,500 metres designed to test trends in mineralization found in historic drilling and major structures interpreted to be associated with mineralization (Figure 1). Disseminated polymetallic cobalt-silver-copper-zinc-lead mineralization has been recognized in samples from underground material in muckpiles from the Drummond mine showing a wide range of styles occur in this area (October 26, 2017 press release).

Holes were targeted using a new 3D geological model prepared with the support of InnovExplo of Val d'Or, Quebec. The model incorporates 2017 regional field mapping information and extensive historic data from more than 100km2 and to a depth of 500m, integrating information from twelve historic mines in the area and from government and unpublished surface geology maps. Major structures controlling known silver-cobalt-nickel mineralization throughout the area are reflected in the model.

The drill program will test structural interpretation of faults and folds considered to be associated with mineralization. At the Keeley, Frontier and Bellellen mines in Cobalt South, breccia zones develop along the major structures hosting cobalt-silver mineralization. Broad zones of disseminated and fracture-controlled cobalt-nickel-silver-copper mineralization are developed along the margins of these structures as well.

Drilling will also test mineralized trends based on historic drill holes with calcite veins containing silver mineralization to test for cobalt, which was not typically assayed with silver. Depth extensions to mineralization will also be tested where appropriate.

Results from the 2017 drill program in Cobalt South successfully identified three target areas: the Woods Extension Zone, the Keeley South Zone and the Bellellen Mine (Figure 2). The program focused on a two kilometre strike length of the Keeley-Frontier vein system and was designed to test the wallrocks hosting silver-rich mineralization as well as areas known to be cobalt-rich. Holes were drilled from 30m to 300m deep to establish variable vein orientations and to determine the Co-Ni-Ag grades in the host rocks to the known Ag-Co calcite veins.

The Woods Extension Zone was identified from assay results at the northern extent of the Frontier mine. Assays from all holes near the historic Frontier mine drilled in 2017 have now been received. Early assay results from the Frontier mine included an intersection of 0.83% Co and 30 g/t Ag over 0.48 metres (November 2, 2017), which was the first indication of a possible extension of the Woods Vein system.

Most cobalt-rich veins intersected demonstrate that mineralization extends outside of the silver-bearing veins. A new cobalt-nickel vein was found between the Woods and Watson veins, grading 0.57% Co and 1.40% Ni over 0.40m (January 10, 2018), suggesting a network may exist where faults and folds converge. The highest grade cobalt veins occur at the north end of the Frontier mine, specifically along the Watson Vein.

Broad zones of disseminated silver and cobalt in altered mafic volcanic rocks were found near the Keeley Mine confirming this style of mineralization is present over significant widths and may be found where vein networks converge. Over 70 metres of anomalous cobalt grading 0.043% Co as disseminated mineralization was identified in drill hole KF-WV-0013 in the southern portion of the historic Keeley mine, starting 15 metres from surface. Drilling in the Keeley South Zone intercepted cobalt in the Woods Vein as well as two additional cobalt intercepts, the KeeleyCo#1 vein and the KeeleyCo#2 vein, indicating that several veins exist in this area. Assays included 15.7m of 0.12% Co, including 6.2m at 0.21% Co and 0.68% Co over 0.34m in the Woods Vein and 1.15% Co over 0.42m in the KeeleyCo#1 vein and 0.60% Co over 0.38m in the KeeleyCo#2 vein (December 19, 2017).

Limited workings were developed into the KeeleyCo#1 and KeeleyCo#2 veins historically for test mining and it is believed they were abandoned due to the low silver, high cobalt nature of the veins. The grades in these new cobalt veins are consistent with other known veins in Cobalt South such as Haileybury and Frontier 1.

Drilling at the Bellellen Mine began in January 2018 and the program was designed to confirm the presence of cobalt-nickel mineralization away from historic mining and to identify the distribution of both vein-style and disseminated-style mineralization previously sampled from underground material. Drill holes targeted the north-south trending Bellellen Vein and the northeast trending Frontier 2 Vein.

Initial assays from this program returned 0.78% Co and 0.83% Ni over 2.0m, including 1.1m of 1.35% Co and 1.47% Ni along the Bellellen Vein system that extends for approximately 300 metres of strike length (February 13, 2018 press release). Several calcite veins and disseminated zones of mineralization were also intersected.