TORONTO, Jan. 18, 2018 /CNW/ - First Cobalt Corp. (TSX-V: FCC, ASX: FCC, OTCQB: FTSSF) (the "Company") is pleased to announce it has commenced drilling at the Bellellen mine in the Cobalt Camp, Ontario. A total of 15 holes for 2,000 metres are planned at Bellellen to test the relationship between the disseminated style of cobalt mineralization identified in 2017 and the vein style mineralization that was traditionally mined in the Cobalt Camp. 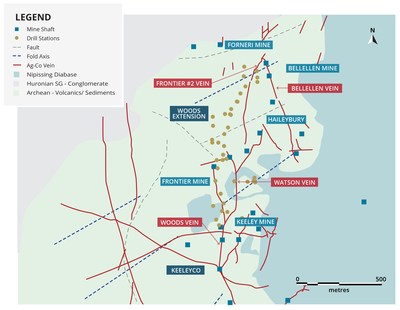 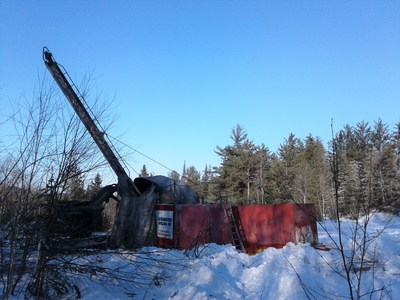 "Bellellen is the initial focus of the 2018 drill program because of the high values of cobalt as a disseminated ore texture with pyrite, which has not been previously described in the Cobalt Camp. Early work suggests that a more complex structural and hydrothermal setting may exist here than was previously considered."

In September 2017, grab samples from historic muckpiles adjacent to the Bellellen mine shafts were collected and analysed for their metal content to validate historic observations. A significant number of samples returned high grade cobalt mineralization, including up to 0.78% Co as disseminated cobaltite with pyrite in altered mafic volcanic rock. Other samples contained a fracture-controlled type mineralization with grades up to 3.76% Co (see September 28, 2017 press release). An association of cobalt and copper within veins was also found in samples at Bellellen with assays of up to 1.55% Cu and 0.40% Co. Permits to drill this property were received in late December.

The 2,000 metre drill program will test the known north-south trending Bellellen vein system as well as the northeast trending Frontier #2 vein system interpreted to intersect the Bellellen vein. The Bellellen mine occurs at the northern portion of the vein system and contains Co-rich mineralization, but its association to the main silver-bearing veins such as the Woods and Watson veins is not known (Figure 1).

The Frontier #2 vein is interpreted to be parallel to a fold structure, based on surface mapping. It is now believed that both the disseminated and vein systems may be associated with these fold structures so drill holes are also planned to test these structures and determine the relationship of these two styles of mineralization.

Drill holes are planned to intersect a wide area around the known veins to test whether disseminated cobalt mineralization occurs as a halo. The disseminated style of cobalt mineralization associated with pyrite at Bellellen mine is distinct from the Keeley-Frontier mine that is dominated by vein-style ore textures and therefore holes will be extended well beyond any veins intersected.

Drill hole lengths will range from 50 to 200 metres and multiple holes may be collared from one drill station to identify the dip and continuity of disseminated and vein styles of mineralization.

Mining at the Bellellen mine began in 1909, around the same time the Haileybury, Frontier and Keeley mines began operations. The Bellellen mine contained high cobalt content relative to silver, thus it struggled to be economically viable in a silver mining era. Bellellen had intermittent production until 1943, when 12.3 tons of ore were shipped containing 9.25% Co and 11.55% Ni. Mined trenches and two shafts are still visible with underground material piled nearby.

Following the drilling at Bellellen, an additional 1,000 metres are planned at Keeley-Frontier to test strike extensions of newly identified cobalt-nickel-silver mineralization at the Woods Extension area north of the Frontier mine and at the KeeleyCo area southwest of the Keeley mine. The next 3,000 metres of drilling will focus on the Drummond and Kerr mines in Cobalt North to test targets generated from 3D structural interpretations of historic mine data compilations currently underway. The winter program will be conducted by Laframboise Drilling from Earlton, Ontario.