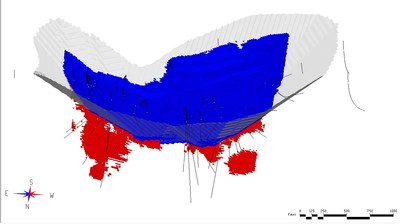 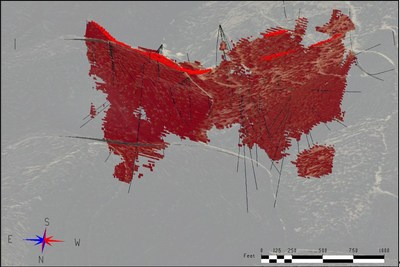 "The initial resource estimate and the pace of progress at Iron Creek have exceeded our expectations. We have delineated a sizeable primary cobalt deposit on patented property and mineralization continues to expand to the east, west and at depth. The mineralogy is simple and initial metallurgical test work is very encouraging with high metal recoveries. Cobalt is associated with pyrite rather than minerals containing arsenic, which may offer processing and offtake advantages."

Mr. Mell went on to say, "Idaho has a long history of mining and we have enjoyed strong support from the State and in Washington, DC. This initial Inferred Resource estimate is an important step forward to a potential source of ethical cobalt in America. Drilling is now underway to test the mineralization strike length from 450 metres to over 900 metres, while also systematically testing depth extensions to over 300 metres to support an updated resource estimate in early 2019."

Mine Development Associates (MDA) in Reno, Nevada was retained to prepare a resource estimate for the Iron Creek cobalt and copper project, located in Idaho, USA. The resource estimate was based on data from 62 diamond drill holes, totaling 49,983 feet (15,235 metres), drilled by the Company in 2017 and early 2018.

The estimate of Inferred cobalt and copper resource is 29.6 million tons (26.9 million tonnes) at average grades of 0.08% cobalt and 0.30% copper, for a cobalt equivalent grade of 0.11%. These are reported at a cutoff of 0.03% CoEq for pit-constrained mineralization and 0.18% CoEq cutoff for potentially underground mineralization. As an alternative, an underground only scenario was estimated at a cutoff of 0.18% CoEq.

The tabulations at 0.15%CoEq, 0.20%CoEq and 0.35%CoEq represent material that could be available if only an underground scenario is to be considered.

MDA identifies a little over half of the resources as lying within the No Name Zone, with the remainder in the Waite Zone, in the footwall to the No Name Zone. More drilling internally should upgrade these resources. The deposit remains open along strike in both directions and at depth.

Multiple cutoff grades are presented to provide an indication of material that would be available for potential exploitation as underground resources (Table 2).

Preliminary flotation tests were completed using three bulk samples extracted from one of three adits on the property. McClelland notes two samples had copper grades close to 1.0% and all three had cobalt grades in the range of 0.25% to 0.40%. All samples responded very well when subjected to rougher flotation using standard conditions. Copper recovery into the bulk concentrate averaged over 97% for the two high-grade samples and 92.5% for the low grade sample. Cobalt was recovered in the pyrite product. For all three bulk samples this product contained more than 90% of the cobalt at grades of 1.2% to 1.8% cobalt.

The Iron Creek property consists of mining patents and exploration claims covering an area of 1,698 acres. Significant infrastructure is in place to support multiple drills and underground activity. Historic underground development includes 600 metres of drifting from three adits and an all-weather road connecting the project to a state highway.

The principal mineral assemblage consists of pyrite, chalcopyrite, pyrrhotite, and magnetite with much lesser quantities of native copper and arsenopyrite locally. Scanning-electron and microprobe tests indicate the cobalt occurs largely or entirely within pyrite and there is a distinct lack of cobaltite, a common cobalt ore mineral containing arsenic. Drill results demonstrate that the cobalt and copper mineralization are in part separated from each other spatially, and in part overlapping.

MDA notes that thicker zones can be correlated with the present drill spacing with moderate confidence. Infill drilling will be required for upgrading the Inferred resources to Measured and Indicated classifications. MDA also concludes that the resource estimate should be considered only as a snapshot in time as the Company is continuing to explore the Iron Creek deposit.

MDA concludes that the Iron Creek Project is a project of merit requiring additional exploration and infill drilling along strike and at depth. They believe that First Cobalt's planned exploration drilling, both inside and outside the main resource area, totaling 70,000ft (21,336m) and a total planned budget of ~$8.6 million is justified.

On June 11, First Cobalt announced a $9 million program intended to extend the known mineralization along strike and bring a portion of the Inferred Mineral Resource estimate into a Measured and Indicated Resource estimate. Longer holes will test cobalt-copper mineralization intersected by 2017 drilling in the footwall, which may extend to surface. Drilling will also test the down dip extension of mineralization below the existing underground adits.

An NI 43-101 Technical Report to be prepared by MDA with an effective date of September 18, 2018, will be posted on www.firstcobalt.com and the Company's profile on SEDAR at www.SEDAR.com within 45 days of the date of this news release.

The technical content of this press release has been reviewed by Steven J. Ristorcelli, C.P.G., P.G. of Mine Development Associates, a Qualified Person as defined by National Instrument 43-101. Dr. Frank Santaguida, P.Geo., is the Qualified Person who has reviewed and approved this news release. Dr. Santaguida is also a Competent Person (as defined in the JORC Code, 2012 edition) who is a practicing member of the Association of Professional Geologists of Ontario (being a 'Recognised Professional Organisation' for the purposes of the ASX Listing Rules). Dr. Santaguida is employed on a full-time basis as Vice President, Exploration for First Cobalt. He has sufficient experience that is relevant to the activity being undertaken to qualify as a Competent Person as defined in the JORC Code. The term "Competent Person" is not recognized by Canadian securities regulatory authorities, and the term is used by the Company with reference to the JORC Code, and to ensure compliance with the ASX Listing Rules and applicable reporting requirements in Australia.