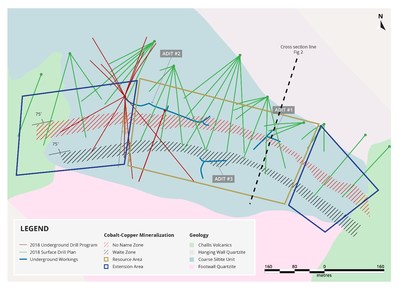 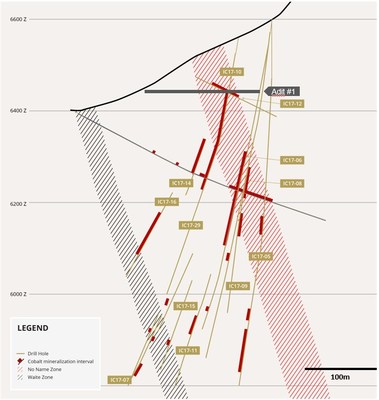 "Our confidence level in the growing footprint of the Iron Creek project warrants an acceleration of drilling activities. A maiden resource estimate is underway and will be available by October. We believe Iron Creek is an important part of the pipeline of cobalt concentrate we intend to feed into the First Cobalt Refinery in Ontario and the addition of two more drill rigs will significantly speed up activities."

First Cobalt previously announced a fully-funded $9 million work program for the Iron Creek Project, which it acquired on June 4, 2018. Drilling is designed to extend the strike length of the mineralized zone to 1,032 metres from the current 520 metres and test down dip extensions of known cobalt-copper zones to over 300 metres below surface. Results reported to date have encountered cobalt-copper mineralization in both the No Name and the Waite Zones.

The addition of two surface rigs will accelerate drilling results and supplement ongoing underground drilling from existing adits. Surface drilling stations were constructed earlier this year and both rigs are already in operation.

A total of 81 holes have been planned and an additional 12 holes are being considered to explore extensions to mineralized intercepts from previous drilling and down-dip extensions to the known mineralized zones below 300m.

Underground drilling has moved from Adit #2 to Adit #1 to provide more detailed data from within the No Name and Waite Zones, in part validating the drill spacing required for a Measured and Indicated Resource calculation (Figure 2). Adit #1 was sampled in detail in 2017 and material was sourced from Adit #1 for preliminary metallurgical tests. Drilling and sampling assays along the walls of Adit #1 done in 2017 returned comparable cobalt and copper grades to results reported pre-1970 (Table 1).

The Iron Creek property consists of mining patents and exploration claims with significant infrastructure already in place to support multiple drills and underground activity. Historic underground development includes 600 metres of drifting from three adits and an all-weather road connecting the project to a state highway.