TORONTO, Feb. 20, 2019 /CNW/ - First Cobalt Corp. (TSX-V: FCC; ASX: FCC; OTCQX: FTSSF) (the "Company") is pleased to report drill results from its Iron Creek Cobalt Project in Idaho, USA, that continue to extend the strike length and width of the mineralized zones to the east of the current resource area as well as downdip a further 100 metres. 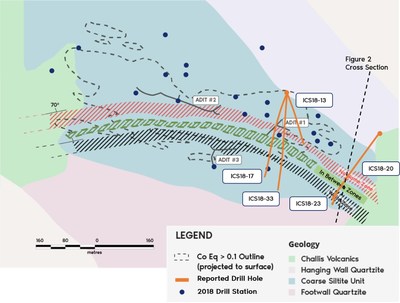 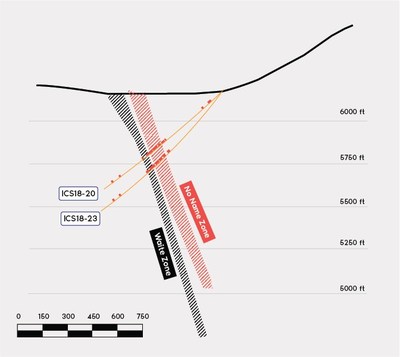 "We are very pleased that the higher grade cobalt mineralization we have seen in Adit#1 continues to extend to depth. Equally impressive is the doubling of the strike extent since the September 2018 resource estimate, with cobalt and copper mineralization spanning over a 900-metre area. I look forward to delivering an updated resource estimate to our investors at the end of next month."

The drill results reported today are from a second phase of drilling that was conducted during 2018. The five holes are from the eastern portion of the Iron Creek resource.

Holes ICS18-20 and ICS18-23 tested the eastern strike extension of mineralization and represent a significant step out to the east from historic drilling programs. Cobalt grades in the two holes reported here are comparable to those within the Inferred Resource (Table 1). Mineralization has been traced by drilling for nearly 900m, a significant increase from the 2018 Resource estimate which included almost 500m of strike. Mineralization was also intersected within the hangingwall, including 4.0m of 0.14% Co containing 1.4m of 0.24% Co, representing potential along a separate horizon to the two main zones.

Three other holes, ICS18-13, ISC18-17 and ISC18-33, were drilled within the eastern portion of Iron Creek targeted mineralization below Adit#1 where higher grade cobalt (>0.4% Co) occurs as semi-massive sulphides as part of the No Name Zone. Higher grade cobalt intersections occur within a broad interval of mineralization, up to 13.1m of 0.27% Co. Previous drill results announced in January also intersected higher grade cobalt near Adit#1, including 0.51% Co over 1.2m true width within 0.35% Co over 4.8m (see January 22, 2019 press release). The correlation of higher grade cobalt between all holes around Adit#1 outlines an area of 100m of strike length and at least 100m downdip and expands the area previously outlined by historic resource calculations done by Noranda Inc.

All three of these drill holes also intersected cobalt mineralization between the No Name and Waite Zones. Grades comparable to the Inferred resource were returned along a horizon between the two zones. All three horizons have been traced to 300m downdip and remain open at depth.

First Cobalt announced on September 26, 2018 an Inferred Resource estimate at Iron Creek of 26.9 million tonnes grading 0.11% cobalt equivalent (0.08% Co and 0.30% Cu containing 46.2 million pounds of cobalt and 176.2 million pounds of copper) under a base case scenario pit constrained and deeper mineral resource. An alternative underground-only scenario results in 4.4 million tonnes grading 0.23% Co and 0.68% Cu (0.30% CoEq) using a cutoff underground grade of 0.18% CoEq and containing 22.3 million pounds of cobalt and 66.7 million pounds of copper. The Inferred resource is based on drilling over a strike length of approximately 500 metres and a dip extent of over 150 metres. Preliminary metallurgical testing concludes that simple flotation methods are applicable, yielding recoveries of 96% for cobalt and 95% for copper in rougher floatation. Historic underground development includes 600 metres of drifting in three adits and an all-weather road connecting the project to a state highway.

First Cobalt is a North American pure-play cobalt company whose flagship asset is the Iron Creek Cobalt Project in Idaho, USA, which has Inferred mineral resources of 26.9 million tonnes grading 0.11% cobalt equivalent. The Company also owns the only permitted cobalt refinery in North America and 50 past-producing mines in the Canadian Cobalt Camp.