Today, Dec. 8, 2017, the bow section of the first AOPS was transported on heavy lift transporters from inside the Halifax Shipyard's indoor shipbuilding facility outside to land level. Work will continue over the coming weeks to fully join the bow mega-block and its components to the centre and stern mega-blocks, which were transported to land level in July 2017. 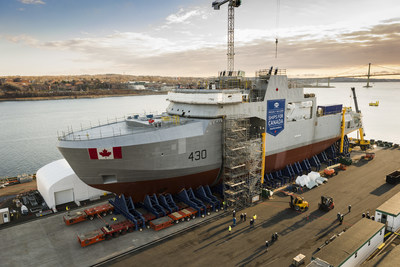 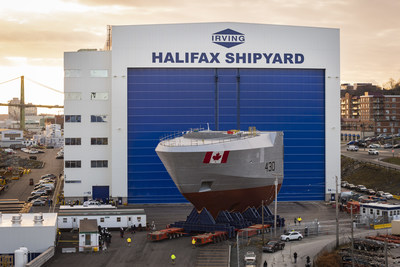 "As the first ship of the class, having the future HMCS Harry DeWolf assembled at land level is a significant milestone for the National Shipbuilding Strategy, the AOPS program, and our 1,800 shipbuilders," said Kevin McCoy, president, Irving Shipbuilding.

With all three sections of the first AOPS joined, further outfitting of the ship will continue.

The future HMCS Harry DeWolf is scheduled to be launched at Halifax Shipyard in summer 2018.

"It is clear that the National Shipbuilding Strategy is working. The Royal Canadian Navy's ships are being built by the best shipbuilders in the most modern shipbuilding facility in North America, Canada's shipbuilding industry is being reinvigorated, and Canadians are benefiting from coast to coast to coast," said McCoy.

To date, Halifax Shipyard and its major subcontractors have more than $1.9 billion in spending commitments with over 250 organizations across Canada as part of the Halifax Shipyard's facility modernization and AOPS program.

Halifax Shipyard's spending commitments span from Newfoundland and Labrador to British Columbia, including most provinces and territories in between such as Nunavut, Ontario and Quebec. The company forecasts more than $3.17 billion of economic activity across Canada between 2013-2022 from the Halifax Shipyard's facility modernization and AOPS construction.

To stay up to date on the Halifax Shipyard's progress building the Royal Canadian Navy's future combatant fleet visit www.ShipsforCanada.ca.

Irving Shipbuilding Inc. is the most modern shipbuilder and in-service ship support provider in North America. Headquartered in Halifax, Nova Scotia, our skilled team and innovative facilities provide efficient building, fabrication, conversion, and servicing of vessels and offshore platforms. As Canada's chosen shipbuilder, Irving Shipbuilding Inc. is working with the Royal Canadian Navy on the next class of Canadian Surface Combatant (CSC) and Arctic and Offshore Patrol Ship (AOPS) vessels under the National Shipbuilding Strategy (NSS). We are proud to continue our long history as a trusted partner in Canadian shipbuilding.  Irving Shipbuilding Inc. is a member of the J.D. Irving, Limited group of companies, a diverse family owned company with operations in Canada and the United States.