TORONTO, April 9, 2019 /CNW/ - A joint statement was released this morning by the lead plaintiffs in the Federal Indian Day School Settlement. Please find the joint statement below. 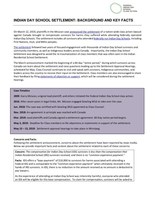 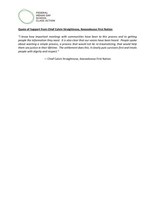 In March, when we gathered together to announce the news of a settlement for survivors of Federal Indian Day Schools, someone very important was missing.  Garry McLean. This man, who we all called "Sunny Boy" for his contagious smile and joy, spent the last decade of his life fighting for justice for IDS survivors.  While we lost Garry just weeks before the announcement, there is no question that the settlement, which bears his name, is infused with his spirit.

If Garry were with us today, he could tell you what it took to achieve this milestone.  He could tell you about the dark hours when it seemed like the case would never move forward, when we all felt abandoned. And yet, he would focus more on the positives such as when he finally connected with our current Class Counsel, Bob Winogron and Jeremy Bouchard – in Garry's words "I finally felt the momentum and progress needed for this case."  We feel the very same momentum and progress.

Garry could tell you about the thousands of survivors across the country that he and the team met with and listened to – led by Garry, together as a team, they worked to build a survivor-first settlement and process. It breaks our hearts that Garry is not here.  But we are; and, we will uphold Garry's work and success.  We will not allow anyone to mischaracterize his legacy.

The settlement achieved through Garry's determination honours the principles he and so many of us have fought for – the fundamental principles of:

Inclusivity:  Anyone who attended an Indian Day School experienced harm emotionally, physically, or both.  All IDS survivors will be eligible for at least the base level of compensation set at $10,000.

Dignity:  Unlike the Residential School process no one will be put on a stand and cross-examined about their story. And no one is going to have to pay lawyers out of their own pockets to gather mounds of evidence.  Survivors have told us that they want a simple process, one that will not cause more trauma. That is a guiding principle behind the IDS process. In fact, the settlement agreement is very clear and explicit:  claimants' stories are to be believed and trusted at face value.

Future generations: One of the most important outcomes of this settlement, and something Garry fought for, is a $200 million legacy fund that will help our communities with healing and wellness programs, and, the support our children and grandchildren need to reclaim our languages, cultures, and traditions.

Justice in our lifetime:  If Garry's passing shows us anything, it is that for survivors time is precious. We lose 2,000 IDS survivors every year.  We cannot wait another five or ten years to have this resolved. This settlement will ensure that as many survivors as possible live to see justice.

This settlement is a critical milestone and people deserve to understand it and how it came to be. We encourage our fellow survivors to ask questions and learn the facts by reaching out directly to Class Counsel.   Call 1-844-539-3815 or visit www.indiandayschools.com

Interviews are available with the lead plaintiffs and Jeremy Bouchard, lead Counsel to the class, upon request and at anytime throughout the notice period. Please reach out to Anna Milner with any questions or requests for information.