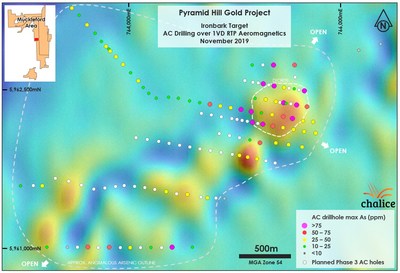 The Company's 25,000m Phase 2 reconnaissance AC drill program at the Ironbark, Karri and Beech Targets continues in the Muckleford Area. A total of 55 AC drill holes for 5,389m have been completed at the Ironbark Target, which is centred over an extensive >5ppb gold-in-soil anomaly with a peak value of 276ppb Au. The Ironbark Target lies under 35-75m of Murray Basin cover.

The Phase 2 AC holes at Ironbark were designed as a follow-up to the promising results generated from a single line of drilling in Phase 1 that intersected a broad zone of anomalous gold (>25ppb Au) extending over seven consecutive 100m-spaced AC holes, with a peak value of 1m at 1.1g/t Au (refer ASX Announcement on 8 July 2019) associated with quartz veining in a diorite intrusion (the "Ironbark Diorite").

Anomalous gold (>25ppb Au) was intersected in basement over an area of approximately 500m x 500m and is broadly coincident with the interpreted outline of the Ironbark Diorite (Figure 1).

Several highly encouraging, wide >0.25g/t Au intervals were intersected over an ~600m long ENE trending secondary dispersion zone, immediately above the fresh rock interface. The anomalous gold is associated with saprolite after Castlemaine Group sediments and/or diorite, with the better results associated with the contact between these two rock-types. These results could indicate the presence of an ENE trending, low angle north-westerly dipping fault, which may explain the presence of Castlemaine Group sediments overlying the diorite intrusion.

Results to date show that the anomalous gold zone is largely open to the west and open along strike to the north-east and south-west. While no ore grade mineralisation has yet been intersected, the early indications from AC drilling provide encouragement that a higher grade trend is being vectored towards.

The anomalous gold zone also has an extensive, coincident arsenic footprint, extending over an area of ~3.2km x up to 2.2km, which is open to the south-west and north-east (Figure 2). Arsenic is considered an important pathfinder metal with other gold deposits in the Bendigo Zone.

The extensive footprint of anomalous gold and arsenic is viewed as very encouraging, given the limited amount of target basement drilled to date (~190m of diorite and 4,180m of Castlemaine Group sediments).

Drilling has also confirmed that an additional circular magnetic anomaly, located ~2km to the north-west of the Ironbark Diorite, is also a diorite intrusion (the "Ironbark North Diorite"). Assay results from these drill holes are pending.

An additional 3,000 – 5,000m of AC drilling is planned in Q4 2019 (Phase 3) to in-fill and extend drill coverage on several existing lines and also step-out along strike to further refine the footprint of gold anomalism and define structural zones of interest. Planning for a phase of diamond drilling has also now commenced.

The 100%-owned Pyramid Hill Gold Project was staked in 2017 and now covers an area of ~5,190km2 in the Bendigo region of Victoria. The Project comprises three key districts within the Murray Basin covered North Bendigo and North Stawell Zones: Muckleford, Mt William and Percydale (Figure 3).

The 'Gold Undercover' initiative by the Victorian Government estimated a potential ~32Moz (P50) of undiscovered gold beneath Murray Basin cover in the Bendigo Zone, where Chalice holds ~60% of the total ~7,000km2 prospective area.

Chalice is targeting large-scale, high-grade gold deposits, and is currently conducting regional scale greenfield exploration. ~50km of reconnaissance aircore (AC) drilling has been completed to date, which has outlined 3 high priority targets within the Muckleford Area (Ironbark, Karri and Beech).

The information in this announcement that relates to Exploration Results in relation to the Pyramid Hill Gold Project is based on information compiled by Dr. Kevin Frost BSc (Hons), PhD, a Competent Person, who is a Member of the Australian Institute of Geoscientists. Dr. Frost is a full-time employee of the company and has sufficient experience that is relevant to the activity being undertaken to qualify as a Competent Person as defined in the 2012 edition of the Australasian Code for Reporting of Exploration Results, Minerals Resources and Ore Reserves, and is a Qualified Person under National Instrument 43-101 – 'Standards of Disclosure for Mineral Projects'. The Qualified Person has verified the data disclosed in this release, including sampling, analytical and test data underlying the information contained in this release.  Dr. Frost consents to the inclusion in the announcement of the matters based on his information in the form and context in which it appears.

The above announcements are available to view on the Company's website at www.chalicegold.com. The Company confirms that it is not aware of any new information or data that materially affects the information included in the relevant original market announcements. The Company confirms that the form and context in which the Competent Person and Qualified Person's findings are presented have not been materially modified from the relevant original market announcements.

Forward-looking statements relate to future events or future performance and reflect Company management's expectations or beliefs regarding future events and include, but are not limited to, the Company's strategy, the price of O3 Mining securities and Spectrum Metals Limited securities, receipt of tax credits and the value of future tax credits, the estimation of mineral reserve and mineral resources, the realisation of mineral resource estimates, the likelihood of exploration success at the Company's projects, the prospectivity of the Company's exploration projects, the timing of future exploration activities on the Company's exploration projects, planned expenditures and budgets and the execution thereof, the timing and availability of drill results, potential sites for additional drilling, the timing and amount of estimated future production, costs of production, capital expenditures, success of mining operations, environmental risks, unanticipated reclamation expenses, title disputes or claims and limitations on insurance coverage.

Such factors may include, among others, risks related to actual results of current or planned exploration activities; changes in project parameters as plans continue to be refined; changes in exploration programs based upon the results of exploration; future prices of mineral resources; possible variations in mineral resources or ore reserves, grade or recovery rates; accidents, labour disputes and other risks of the mining industry; delays in obtaining governmental approvals or financing or in the completion of development or construction activities; movements in the share price of O3 Mining and Spectrum Metals securities and future proceeds and timing of potential sale of O3 Mining and Spectrum Metals securities, as well as those factors detailed from time to time in the Company's interim and annual financial statements, all of which are filed and available for review on SEDAR at sedar.com, ASX at asx.com.au and OTC Markets at otcmarkets.com.