TORONTO, March 14, 2019 /CNW/ - Excellon Resources Inc. (TSX:EXN; OTC:EXLLF) ("Excellon" or the "Company") is pleased to report further exploration results from the Evolución Property in the state of Zacatecas, Mexico. This program is the first drilling in the area since 2010 and follows an extensive, year-long prospecting and mapping program which has identified several priority targets. 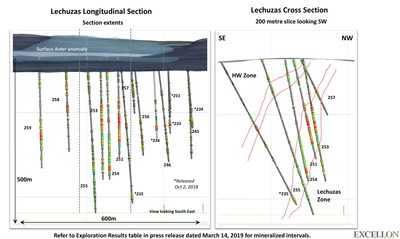 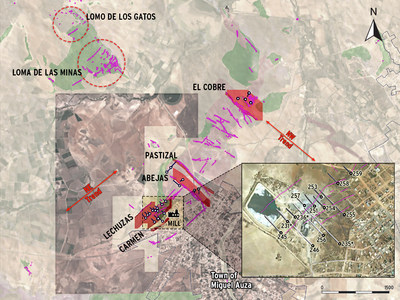 "We are still in the early days of exploring at Evolución, but the grades, widths and consistency of mineralization that we have intersected along strike and down dip are very encouraging," stated Ben Pullinger, Senior Vice President Geology. "This drilling has loosely defined a large disseminated mineralized zone and we are working to use this data to vector in on higher grades in future drilling. We continue to view these results as evidence of a large mineralized system especially considering the amount of metal represented in these intersections and the numerous additional veins to be tested regionally."

This program followed up on promising results encountered in earlier drilling on the Lechuzas structure in EX18MAZ-236 and EX18MAZ-235 (see Lechuzas sections below). The program succeeded in tracing mineralization along strike for 600 metres and to a depth of approximately 500 metres, where it remains open along strike and down dip. Follow up drilling associated with this target will be focused on delineating higher-grade vectors within the system. Mineralization at the Lechuzas target is hosted within the Caracol formation, which is a host to the most significant deposits within the Fresnillo trend. Precious and base metal mineralization occur within and associated with carbonate veining in structures in the host formation. Pyrite, sphalerite and galena are the most commonly observed minerals within the mineralized intervals. Drilling to the north west in EX18MAZ-258 and 259 also encountered mineralization associated with silica and quartz veining. Textures observed within the calcite veins display blading with banding, with similar textures also observed when silica is noted in veins.

Mineralization in the  Evolución region is hosted in epithermal quartz veins typical of the Fresnillo silver belt, most proximally at Hecla Mining Company's San Sebastián Mine, 42 kilometres to the northwest and along strike from Evolución. Mining was historically undertaken on the Calvario Vein and via multiple shafts along the structures being tested as part of this program.

The Evolución property covers 45,000 hectares (450 km2) and 35 kilometres of strike in one of the world's premier silver districts. The property includes a mineral processing facility, which the Company utilizes to process ore from its Platosa Mine in the state of Durango, Mexico. The mineral processing facility currently has capacity of 800 tonnes per day ("tpd"), with a 650 tpd ball mill in operation and a second, 150 tpd ball mill on standby, with opportunities available for further expansion. Ample capacity remains available to process increased Platosa Mine production and potential new discoveries at either Platosa or Evolución, along with ore from San Sebastián expected to enter bulk sample testing pursuant to a toll milling arrangement later this year.

Mr. Ben Pullinger, P. Geo., Senior Vice President Geology, has acted as the Qualified Person, as defined in NI 43-101, with respect to the disclosure of the scientific and technical information relating to exploration results contained in this press release.

Excellon's 100%-owned Platosa Mine has been Mexico's highest-grade silver mine since production commenced in 2005. The Company is focused on optimizing Platosa's cost and production profile, discovering further high-grade silver and carbonate replacement deposit (CRD) mineralization on the 21,000 hectare Platosa Project and epithermal silver mineralization on the 100%-owned 45,000 hectare Evolución Property, and capitalizing on current market conditions by acquiring undervalued projects in the Americas.

Additional details on the La Platosa Mine and the rest of Excellon's exploration properties are available at www.excellonresources.com.

The Toronto Stock Exchange has not reviewed and does not accept responsibility for the adequacy or accuracy of the content of this Press Release, which has been prepared by management. This press release contains forward-looking statements within the meaning of Section 27A of the Securities Act and Section 27E of the Exchange Act. Such statements include, without limitation, statements regarding the future results of operations, performance and achievements of the Company, including potential property acquisitions, the timing, content, cost and results of proposed work programs, the discovery and delineation of mineral deposits/resources/reserves, geological interpretations, proposed production rates, potential mineral recovery processes and rates, business and financing plans, business trends and future operating revenues. Although the Company believes that such statements are reasonable, it can give no assurance that such expectations will prove to be correct. Forward-looking statements are typically identified by words such as: believe, expect, anticipate, intend, estimate, postulate and similar expressions, or are those, which, by their nature, refer to future events. The Company cautions investors that any forward-looking statements by the Company are not guarantees of future results or performance, and that actual results may differ materially from those in forward looking statements as a result of various factors, including, but not limited to, variations in the nature, quality and quantity of any mineral deposits that may be located, significant downward variations in the market price of any minerals produced, the Company's inability to obtain any necessary permits, consents or authorizations required for its activities, to produce minerals from its properties successfully or profitably, to continue its projected growth, to raise the necessary capital or to be fully able to implement its business strategies. All of the Company's public disclosure filings may be accessed via www.sedar.com and readers are urged to review these materials, including the technical reports filed with respect to the Company's mineral properties, and particularly the September 7, 2018 NI 43-101 technical report prepared by SRK Consulting (Canada) Inc. with respect to the Platosa Property. This press release is not, and is not to be construed in any way as, an offer to buy or sell securities in the United States.

Excellon's 100%-owned La Platosa Mine in Durango is Mexico's highest grade silver mine, with lead and zinc by-products making it one of the lowest cash cost silver mines in the country. The Company is positioning itself to capitalize on undervalued projects by focusing on...