- Increasing global reach of Embracing Carers™ to include Brazil and China

DARMSTADT, Germany, Nov. 6, 2018 /CNW/ -- Merck KGaA, Darmstadt, Germany, which operates its biopharmaceutical business in the U.S. and Canada as EMD Serono, today announced the continued expansion of Embracing Carers™. The global initiative, led by Merck KGaA, Darmstadt, Germany in collaboration with leading caregiver organizations around the world, seeks to increase awareness, discussion, and action about the often-overlooked needs of caregivers. At the one-year anniversary since the launch of the global movement, Embracing Carers™ has made tangible progress in building awareness and implementing practical solutions to support caregivers. 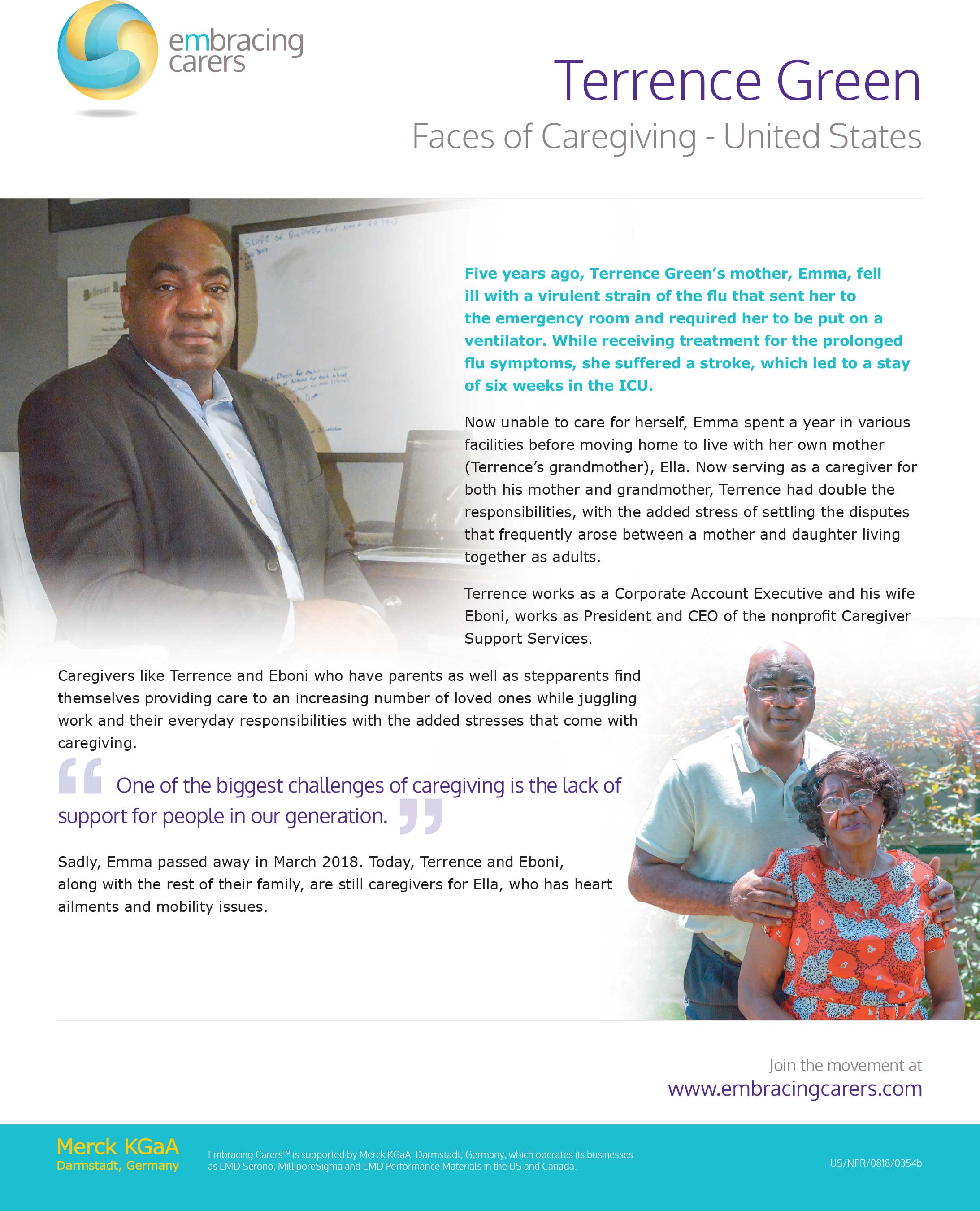 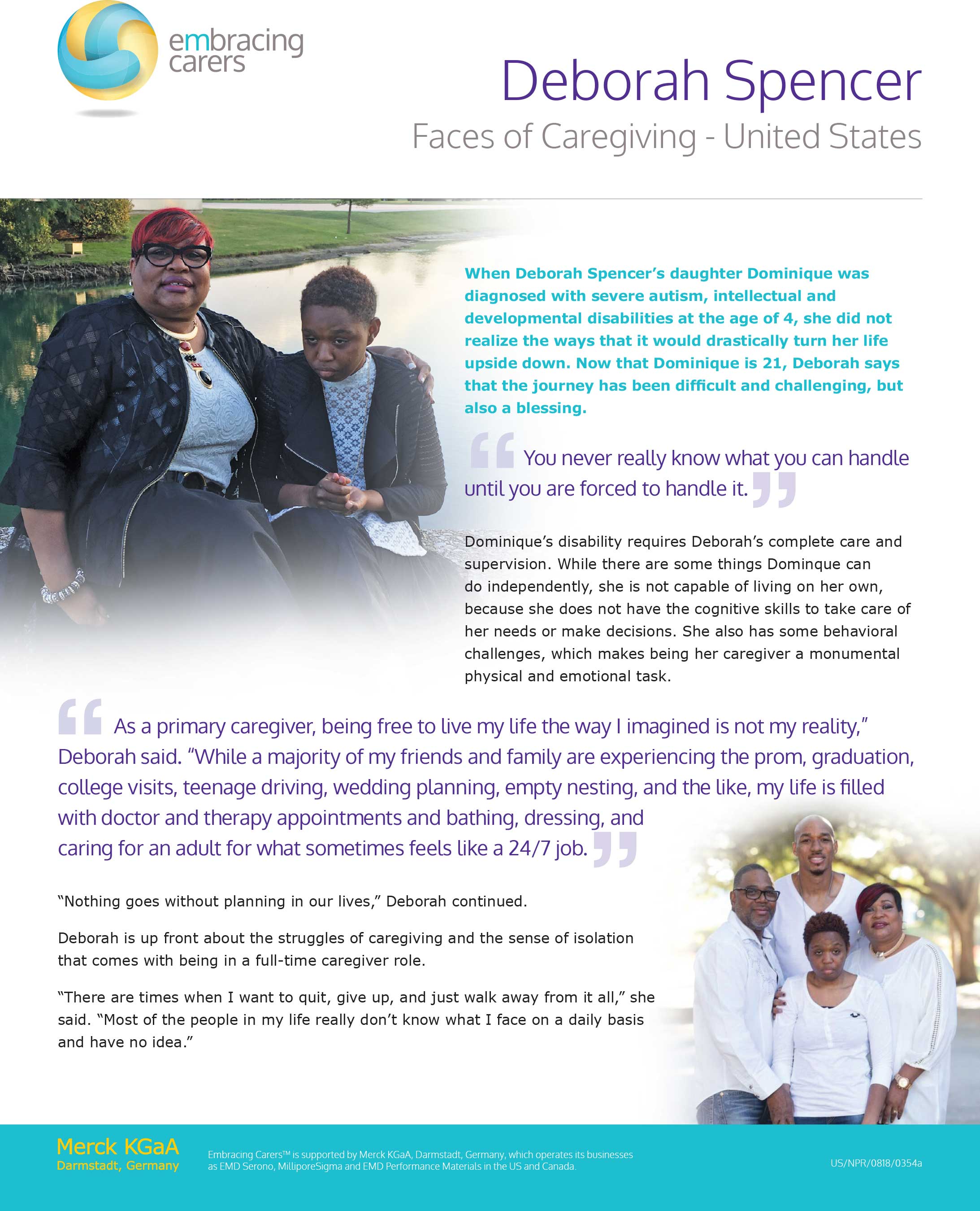 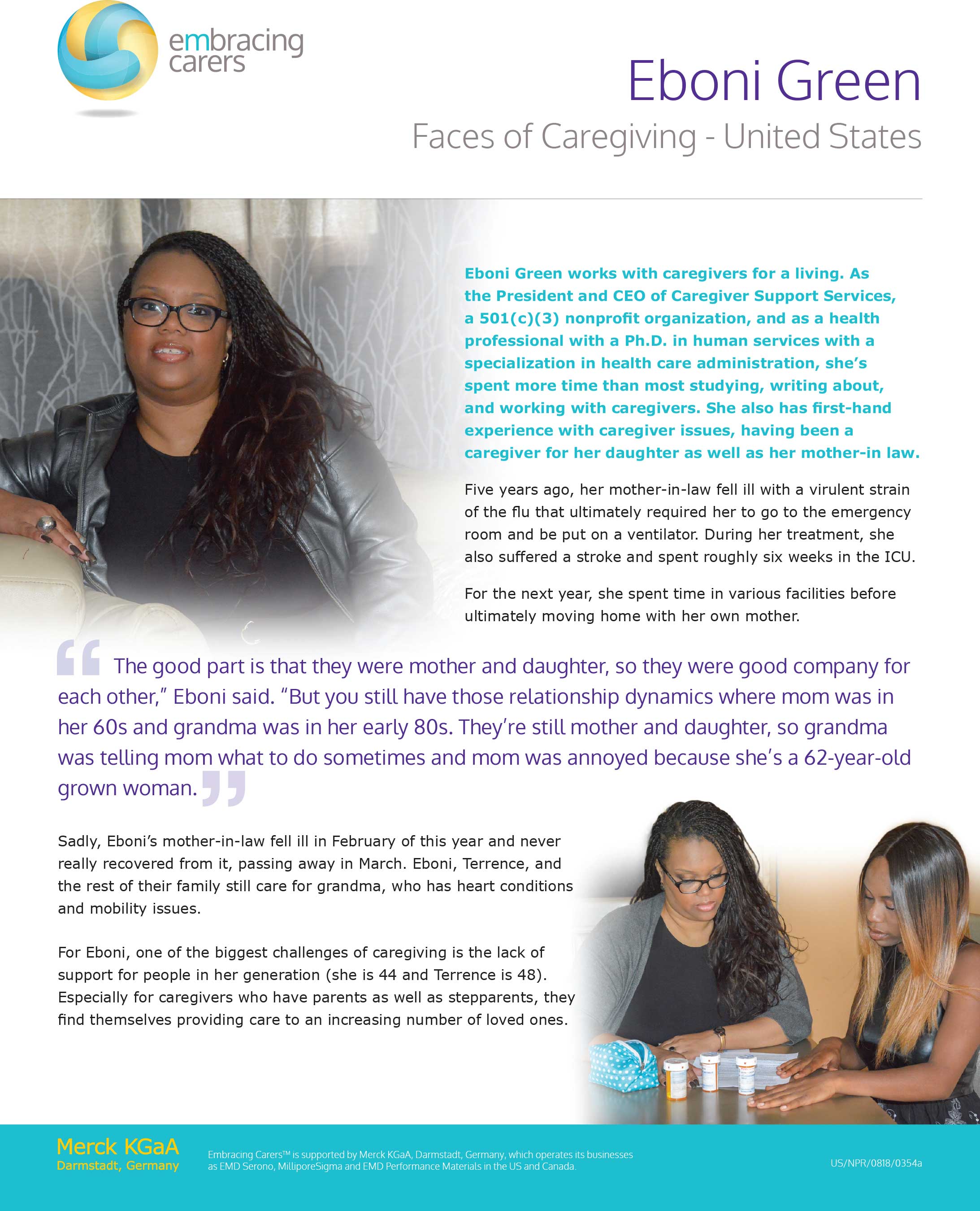 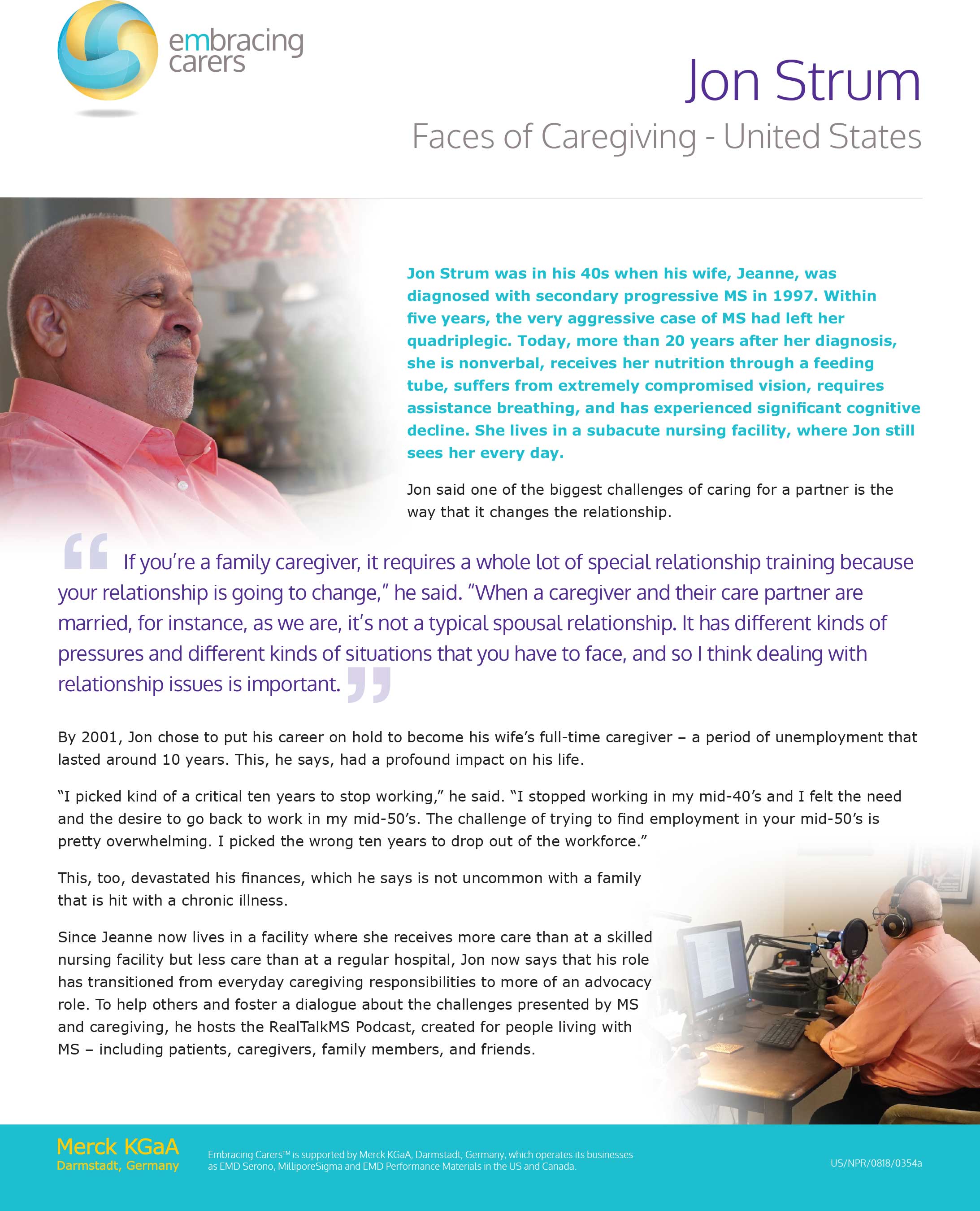 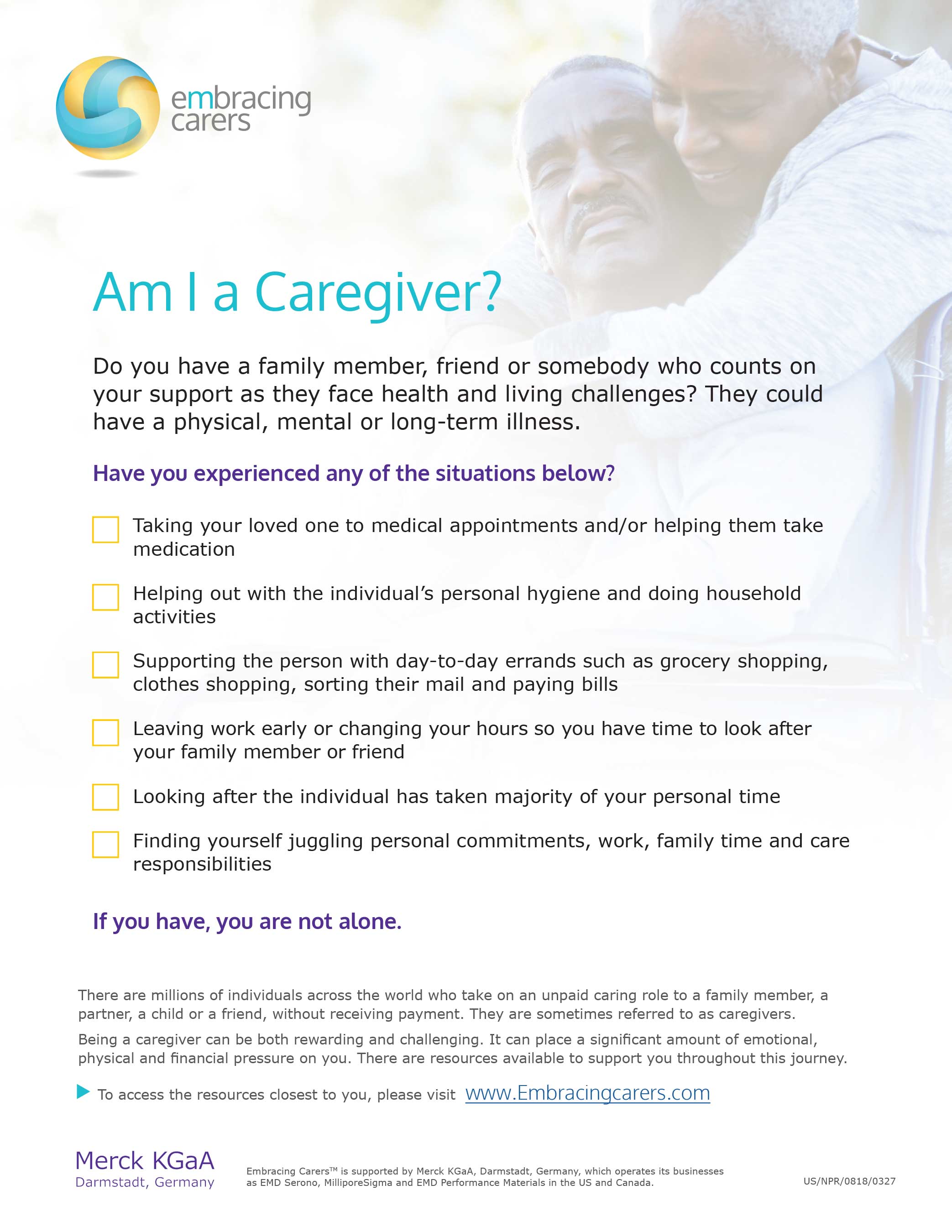 "Caregivers are a hidden pillar within the healthcare system," said Belén Garijo, Member of the Executive Board and CEO Healthcare at Merck KGaA, Darmstadt, Germany. "They are critical contributors to the health and wellbeing of patients, which very often affects the caregiver's health as well as financial, personal and professional development. We at Merck KGaA, Darmstadt, Germany are committed to support the needs of caregivers and to help raise awareness of their role as a global health priority."

With a continued focus on the pillars of awareness raising, as well as stakeholder, healthcare system, and policy engagement, Embracing Carers™ has undertaken a series of innovative activities in 2018.

Engaging Healthcare Systems and Activating PolicyWith support from Embracing Carers™, the International Alliance of Carer Organizations (IACO) will publish a Global State of Care Report, which has been developed to provide a global assessment of unpaid caregiver needs and best practices across Australia, Canada, France, Germany, India, Italy, Spain, United Kingdom and the United States. The Report will be launched at the International Forum on Care and Caregiving in Toronto, Canada on November 22, 2018.

"Recognition and support of caregivers is a global priority. Since its launch, Embracing Carers™ has made positive steps to bring visibility and advance actions for caregivers," said Nadine Henningsen, IACO Board Chair. "IACO, along with the other strategic advisors, will continue to guide Embracing Carers™ and leverage advocacy resources, such as the Global State of Care Report, to continue building on this momentum."

Broadening Stakeholder Engagement to Foster Best PracticeIACO, with the support of Embracing Carers™, is developing a series of Innovative Carer Practices (ICPs) that will showcase evidence-informed practices that enhance the quality and effectiveness of integrated care for caregivers to identify, spread and scale promising practices for caregivers. ICPs from France, Ireland, Taiwan, and the United Kingdom will be showcased across the world throughout 2018 and 2019.

Embracing Carers™ has provided support to leading patient organizations who are leading efforts targeted to patients and caregivers globally.

Embracing Carers™ is a global movement led by Merck KGaA, Darmstadt, Germany in collaboration with leading caregiver organizations around the world to increase awareness and discussion about the often-overlooked needs of caregivers. The initiative plays a major role in raising awareness about the importance of caregivers as a global health priority. For more information on Embracing Carers™, visit our website at www.embracingcarers.com

About EMD Serono, Inc. EMD Serono - the biopharmaceutical business of Merck KGaA, Darmstadt, Germany, in the U.S. and Canada – is engaged in the discovery, research and development of medicines for patients with difficult to treat diseases. The business is committed to transforming lives by developing and delivering meaningful solutions that help address the therapeutic and support needs of individual patients. Building on a proven legacy and deep expertise in neurology, fertility and endocrinology, EMD Serono is developing potential new oncology and immuno-oncology medicines while continuing to explore potential therapeutic options for diseases such as psoriasis, lupus and multiple sclerosis. Today, the business has approximately 1,300 employees around the country with commercial, clinical and research operations based in the company's home state of Massachusetts. www.emdserono.com

Founded in 1668, Merck KGaA, Darmstadt, Germany, is the world's oldest pharmaceutical and chemical company. The founding family remains the majority owner of the publicly listed corporate group. Merck KGaA, Darmstadt, Germany, holds the global rights to the „Merck" name and brand. The only exceptions are the United States and Canada, where the company operates as EMD Serono, MilliporeSigma and EMD Performance Materials.

About the International Alliance of Carer Organizations (IACO)Incorporated in 2012, the International Alliance of Carer Organizations (IACO) is a global coalition of 15-member nations committed to building a global understanding and respect for the vital role of family caregivers. Recognized as an official NGO by the United Nations, IACO  works to improve the quality of life and support the needs of caregivers, through international partnerships and advocacy that strengthens and honors the voice of caregivers. To learn more, visit www.internationalcarers.org.