When reflecting on 2018, Wayne Wisniewski, President and Chief Executive Officer, stated, "Eagle continues to execute its previously announced plan to reduce debt and corporate costs. Our 2018 full year administrative expenses, excluding one-time costs associated with the Salt Flat and Twining dispositions, are 11% lower than our 2017 levels.  We have undertaken cost cutting initiatives including reducing our staff headcount by 27% over the year and reducing our number of contractors by five.  Overall, we estimate our 2019 full year administrative expenses to be 28% lower than 2018 levels. In addition, when compared to 2017 year-end, we have reduced our term loan at year end by 48%."

Mr. Wisniewski continued, "We continue to work with our financial advisors to investigate, evaluate and consider possible asset sales and restructuring alternatives.  Given the improvement in commodity prices since the end of 2018 and an upcoming sale of our Texas overriding royalty interests, we have decided to forego entering into another forbearance agreement with our lender at this time to replace the one that expired January 31, 2019.  We feel this affords us the maximum flexibility in managing our business and avoids incurring additional fees and conditions associated with a forbearance agreement."

Eagle's reserves data and other oil and gas information is included in its Annual Information Form dated March 21, 2019 for the year ended December 31, 2018 ("AIF").  Eagle's audited consolidated annual financial statements, management's discussion and analysis and AIF have been filed with the securities regulators and are available online under Eagle's issuer profile on SEDAR at www.sedar.com and on Eagle's website at www.EagleEnergy.com.

This news release contains non-IFRS financial measures and statements that are forward-looking.  Investors should read the sections titled "Non-IFRS Financial Measures" and "Note about Forward-Looking Statements" near the end of this news release.  Figures within this news release are presented in Canadian dollars unless otherwise indicated.

Eagle achieved the following results in 2018:

At December 31, 2018, the following circumstances cause material uncertainties that may cast significant doubt regarding Eagle's ability to continue as a going concern:

Eagle has undertaken several cost-cutting measures to reduce administrative and operating expenses, such as reducing its staff headcount by 27% over the year, reducing its number of contractors by five, negotiating better pricing with contractors and listing its Calgary office space for sublease.

In December 2018, as a result of falling WTI prices and high Canadian oil differentials, Eagle implemented a selective well shut-in program in Canada to maximize cash flow and was able to remain cash flow positive at the field level for the fourth quarter of 2018.

For 2019, as WTI strengthens and the Canadian oil differentials narrow, Eagle has restored production levels to increase field level cash flow.  Eagle continues to evaluate exposure to market risks from fluctuations in commodity prices and has entered into risk management contracts to reduce commodity price risks.

Eagle currently has curtailed all capital spending for 2019 and continues to work with its financial advisors to investigate, evaluate and consider possible asset sales and restructuring alternatives.

Eagle's ability to meet its ongoing financial liabilities, including liabilities relating to its loan agreement, and to continue as a going concern, is dependent upon the ongoing support from its lender and its ability to fund the repayment of its debt by generating positive cash flows from operations, securing funding from additional debt or equity financing, disposing of assets or making other arrangements.  There is no certainty that such initiatives will be successful.

Since 2018 year end, Eagle has undertaken the following:

An independent evaluation of Eagle's U.S. reserves was conducted by Netherland, Sewell & Associates, Inc. and of Eagle's Canadian reserves by McDaniel & Associates Consultants Ltd.  These reserves evaluation reports are effective December 31, 2018 and were prepared in accordance with National Instrument 51-101 Standards of Disclosure for Oil and Gas Activities.  Details regarding Eagle's reserves and oil and gas assets are set forth in Eagle's AIF.

The following tables summarize the independent reserves estimates and values of Eagle's reserves as at December 31, 2018.  Totals may not add due to rounding.

During the fourth quarter of 2018, sales volumes decreased 5% when compared to the third quarter.  Production from the North Texas properties increased by 176 boe/d due to the third well of the 2018 drilling program starting production.  Production from the Canadian properties decreased by 282 boe/d primarily due to the disposition of the Twining properties at the end of August, as well as the selective well shut in process that was initiated in Dixonville in response to the low commodity price environment.

During the fourth quarter of 2018, field netback decreased 44% when compared to the third quarter due to lower production and a 35% decrease in realized prices net of royalties, which was consistent with the WTI price decrease and the dramatically wider price differentials on Canadian oil.  When compared to the third quarter, the negative effect on field netback of lower prices was partially offset by a 31% decrease in operating, transportation and marketing expenses in the fourth quarter, as Eagle raised production from one well in North Texas and initiated a selective well shut in program in Dixonville.

During the latter part of the fourth quarter, an unprecedented widening in oil price differentials caused a significant decrease in field netbacks in the Dixonville area.  The differential between $CA WTI and Eagle's received price was $58.86 per barrel in December, resulting in a December realized oil price of $4.60 per barrel.  As a result of the low pricing in December, Eagle proactively initiated a selective well shut-in program, which reduced workover expenditures.  This, in turn, lowered production, but resulted in Dixonville being cash flow positive at a field level during the fourth quarter of 2018.

Funds flow from operations decreased 35% from the third quarter of 2018.  This was primarily due to 44% lower fourth quarter field netbacks being partially offset by a realized risk management gain of $1.3 million in the fourth quarter.

(Loss) earnings on a quarterly basis often do not move directionally or by the same amounts as funds flow from operations.  This is due to items of a non-cash nature that factor into the calculation of (loss) earnings, and those that are required to be fair valued at each quarter end.  Fourth quarter 2018 funds flow from operations decreased by 35% from the third quarter of 2018, yet the fourth quarter net income was 214% less than the third quarter of 2018 primarily as a result of a $5.3 million impairment expense realized in the fourth quarter relating to Dixonville.

Statements throughout this news release make reference to the terms "field netback" which is a non-IFRS financial measures that does not have a standardized meaning prescribed by IFRS and may not be comparable to similar measures presented by other issuers.

Eagle's actual results could differ materially from those anticipated in these forward-looking statements as a result of the risk factors set forth below and those in the AIF:

As a result of these risks, actual performance and financial results in 2019 may differ materially from any projections of future performance or results expressed or implied by these forward‐looking statements.  Eagle's production rates, operating and general and administrative costs, field netbacks, drilling program, capital budget, reserves and potential transactions are subject to change in light of ongoing results, prevailing economic circumstances, obtaining regulatory approvals, commodity prices, exchange rates, financing terms, and industry conditions and regulations.  Statements relating to "reserves" or "resources" are deemed to be forward-looking statements, as they involve the implied assessment, based on certain estimates and assumptions, and that the resources and reserves described can be profitably produced in the future.  New factors emerge from time to time, and it is not possible for management to predict all of these factors or to assess, in advance, the impact of each such factor on Eagle's business, or the extent to which any factor, or combination of factors, may cause actual results to differ materially from those contained in any forward-looking statement. 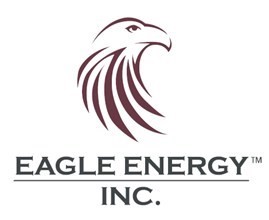