PERTH, Western Australia, Sept. 2, 2019 /CNW/ - Chalice Gold Mines Limited ("Chalice" or "the Company") (ASX: CHN |TSX: CXN | OTCQB: CGMLF) is pleased to announce that it is scheduled to commence the second phase of reconnaissance air-core (AC) drilling at the Pyramid Hill Gold Project in the Bendigo Region of Victoria in late September 2019. All statutory approvals have now been received and all relevant access agreements are in place. 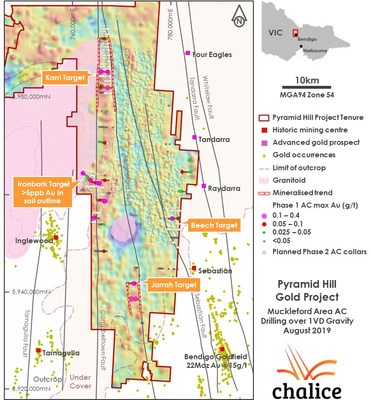 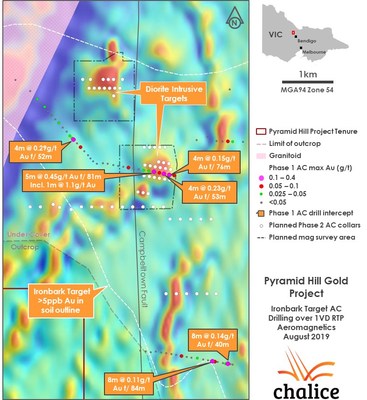 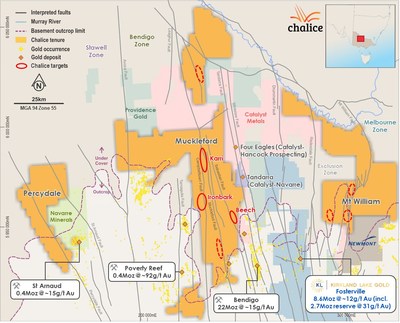 The Phase 2, ~24,500m AC drill program is designed to refine the Ironbark, Karri and Beech Targets defined in Phase 1, in order to maximise the effectiveness of future deeper RC or diamond drilling. The same high-capacity, multi-purpose AC/RC drilling rig used in Phase 1 has been contracted. Several additional regional geochemical and geophysical target areas of interest will also be drilled (Figure 1).

Commenting on the upcoming drilling, Chalice's Managing Director, Alex Dorsch, said: "The three targets generated in the first phase of drilling have the right scale and geological potential for multiple large-scale gold discoveries. We are particularly intrigued by the diorite intrusion at the Ironbark Target, which is highly unusual for the Bendigo Zone and potentially presents a new target style for this area with similarities to the high-grade Walhalla-Woods Point Goldfield in Eastern Victoria."

"The upcoming phase of AC drilling is designed to further refine the target footprints and provide valuable geochemical and geological data which will be used to systematically vector in towards potential deeper primary gold lodes."

"Importantly, we have been able to secure all the necessary approvals and land access to complete the next phase of drilling and we will continue to work closely with all land-owners and the local community."

"Chalice is in a strong position ahead of this next phase of drilling, having the financial resources to explore systematically at scale in this high grade but virtually unexplored gold province. We look forward to reporting results from drilling over the next few months."

A total of ~70 AC drill holes (~7,500m) are planned at the Ironbark Target, which is centred around a large 10km by up to 7km >5ppb gold-in-soil anomaly. The soil anomaly has a peak of 276ppb Au and, importantly, also has associated pathfinder metals. The target is situated between the regional-scale Muckleford Fault and the Wedderburn Granodiorite.

Broad gold anomalism above 25ppb Au and up to 1.1g/t Au was intersected in the Phase 1 drill program along a 650m section of the central drill line. Three consecutive holes ~100m apart intersected a mafic intrusive, with a best result of 5m @ 0.45g/t Au including 1m @ 1.1g/t Au associated with quartz veining (Figure 2).

Further technical information on this district is provided in Appendix 1.

Regional aeromagnetics suggest that the diorite intrusive intersected in the Phase 1 AC drilling at Ironbark is a circular magnetic body ~380m in diameter, making it much larger and a different (and potentially more favourable) geometry to the dykes at Walhalla-Woods Point.

A high definition 25m-line spaced ground magnetic survey is planned over both magnetic anomalies to refine targeting for the next phase of deeper drilling. The planned Phase 2 holes will systematically test the weathered top of the intrusive targets, at a nominal 100-250m hole spacing, while also providing a first-pass test of several other nearby structural targets.

A total of ~90 AC drill holes (~10,500m) are planned at the Karri Target, which includes an ~350m wide, north-south striking zone of elevated gold and pathfinder elements (including Sb, Hg, Te, Bi, Zn, Cu and As) on Phase 1 AC lines ~7km apart. This 7km of strike between lines remains entirely untested by drilling.

Better results from Phase 1 include 16m @ 0.15g/t Au from 62m within a 350m wide zone of anomalous gold (>25ppb Au), interpreted to be a secondary supergene dispersion zone near the weathered top of the Castlemaine Group sediments. Based on limited drilling thus far, Karri is interpreted to be a classic Bendigo Zone-style target (flat-lying, shallow doubly plunging anticlinal stacked lode system, in the hanging wall of a regional scale, steep westerly dipping fault). Given the strike extensiveness of the gold anomalism identified to date at the top of weathered basement, it is considered to have significant scale potential.

The planned Phase 2 holes will systematically test the Karri Target at a nominal 1km drill line spacing and 100-200m drill hole spacing (Figure 4). The drilling is designed to further refine the footprint of gold anomalism, in order to vector towards the bedrock source with future infill and deeper drilling.

A total of ~35 AC holes for ~4,000m are proposed at the Beech Target, where Phase 1 AC results included arsenic (As) anomalism up to 8,500ppm and associated antimony (Sb) up to 40ppm in hole PA136, which is the strongest As intercept to date on the project. Arsenic and antimony are considered the strongest pathfinder metals for gold in the Bendigo Zone.

The Beech Target is located ~25km along strike from Bendigo (22Moz @ ~15g/t Au) on the Sebastian Fault, and is broadly associated with carbonate alteration and low-level gold anomalism.

The planned Phase 2 holes will systematically test the Beech Target on a nominal 1-2km drill line spacing and 100-200m drill hole spacing. The drilling is designed to define the footprint of gold anomalism for future infill drilling.

Approximately 28 holes for ~2,500m are also planned as a first-pass shallow test of other regional targets in the Muckleford Area (in a similar manner to the Phase 1 program). Several isolated holes in the central part of the Muckleford Area are planned on gravity highs (interpreted basement highs) below Murray Basin and Permian tillite cover, where limited historical drilling has been unable to successfully establish depth to the target Castlemaine Group basement.

Several reconnaissance AC drill lines in the southern part of the Muckleford Area are also planned as a first-pass shallow test of three areas of anomalous arsenic in soils.

The above announcements are available to view on the Company's website at www.chalicegold.com. The Company confirms that it is not aware of any new information or data that materially affects the information included in the relevant original market announcements. The Company confirms that the form and context in which the Competent Person and Qualified Person's findings are presented have not been materially modified from the relevant original market announcements.

The 100%-owned Pyramid Hill Gold Project was staked in 2017 and now covers an area of ~5,140km2 in the Bendigo region of Victoria. The Project comprises three key districts within the Murray Basin covered North Bendigo and North Stawell Zones: Muckleford, Mt William and Percydale (Figure 5).

The 'Gold Undercover' initiative by the Victorian Government estimated a potential ~32Moz (P50) of undiscovered gold beneath Murray Basin cover in the Bendigo Zone, where Chalice holds ~60% of the total ~7,000km2 prospective area (Figure 6).

The Walhalla-Woods Point Goldfield is located approximately 125km east of Melbourne, in the Melbourne Geological Zone. While the majority of gold deposits in the Walhalla-Woods Point Goldfield are sediment hosted, the highest yielding and most significant deposits are classified as either "dyke-associated" or "dyke-hosted" (Hough, M. A. et. al 2010).

While gold mineralisation is known to closely post-date dyke emplacement in the range of ~2-4 million years (Jowitt, M. et. al 2012), the high-grade gold association with the dykes is understood to be due to greater chemical reactivity and rheological contrasts between the dykes and surrounding metasedimentary rocks.

The "dyke-hosted" deposits (e.g. Morning Star and A1) typically occur where dykes bulge and thicken along strike and are hosted by auriferous quartz veins developed in reverse faults that cross-cut the dykes forming a vertical 'ladder vein' network or in quartz veins sub-parallel to the strike of the dykes themselves.

The quartz veins frequently cross the entire dykes but only persist for short distances, if at all, into the neighbouring metasedimentary country rocks. The highest gold grades (>1500g/t Au) typically occur within 20-30cm wide laminated quartz veins (Jowitt, M. et. al 2012) associated with repeated activation and precipitation of gold fluids along fault structures, with grades recognised to generally increase with deposit depth.

The "dyke-associated" deposits in contrast (e.g. Cohens Reef) are typically hosted within narrow shear zones (<20m width) located along the margins of narrow dykes with massive to laminated auriferous quartz veining developed throughout the shear zone. Whilst narrow, the Cohens Reef deposit is relatively large (1.48Moz Au) and strike extensive.

The information in this release that relates to Exploration Results in relation to the Pyramid Hill Gold Project is based on information compiled by Dr. Kevin Frost BSc (Hons), PhD, a Competent Person, who is a Member of the Australian Institute of Geoscientists. Dr. Frost is a full-time employee of the company and has sufficient experience that is relevant to the activity being undertaken to qualify as a Competent Person as defined in the 2012 edition of the Australasian Code for Reporting of Exploration Results, Minerals Resources and Ore Reserves, and is a Qualified Person under National Instrument 43-101 – 'Standards of Disclosure for Mineral Projects'. The Qualified Person has verified the data disclosed in this release, including sampling, analytical and test data underlying the information contained in this release.  Dr. Frost consents to the inclusion in the release of the matters based on his information in the form and context in which it appears.

Forward-looking statements relate to future events or future performance and reflect Company management's expectations or beliefs regarding future events and include, but are not limited to, the Company's strategy, the likelihood of exploration success at the Pyramid Hill Project (Project), the prospectivity of the Project, the timing of future exploration activities on the Project, planned expenditures and budgets and the execution thereof, the timing and availability of drill results, potential sites for drilling and execution of additional drilling, environmental risks, unanticipated reclamation expenses, title disputes or claims.

Such factors may include, among others, risks related to actual results of current or planned exploration activities; changes in project parameters as plans continue to be refined; changes in exploration programs based upon the results of exploration; accidents, labour disputes and other risks of the mining and exploration industry; delays in obtaining governmental approvals; as well as those factors detailed from time to time in the Company's interim and annual financial statements, all of which are filed and available for review on SEDAR at sedar.com on ASX at asx.com.au and OTC Markets at otcmarkets.com.