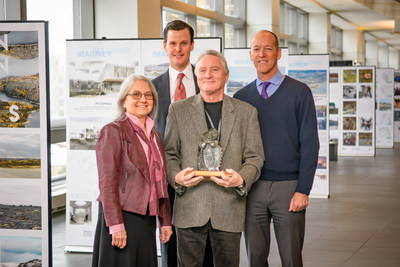 "By prioritizing engagement with First Nations and Inuit communities, Dr. Allard revolutionized the way research is conducted in the North. His work has led to significant advancements in scientific technology and the development of sustainable infrastructure that addresses the unique challenges of this region," says Geordie Dalglish, Director of The W. Garfield Weston Foundation and Chair of its Northern Committee. "We are thrilled to present him with the Weston Family Prize for Lifetime Achievement in Northern Research, recognizing his tremendous scientific and social contributions in Canada's North."

Dr. Allard's career shows a lifetime of dedication to northern science and a commitment to applying his research and expertise to urgent environmental concerns of northerners. For almost four decades, he has conducted research in Nunavik, northern Quebec, bringing important new insights into understanding permafrost dynamics and the impact of climate change on the Arctic environment. He has been profoundly successful in developing innovative methods and technologies that have been integrated into land-use planning and policymaking in communities across Canada.

A key component of his success has been the trust he built with Inuit and First Nations communities, working with them to ensure results are communicated in a form that can be understood and applied. His attentiveness to their concerns led him to develop practical solutions that contribute to their overall wellbeing and safety.

Dr. Allard has authored and co-authored over 130 papers in scientific journals and has written over 50 reports related to the impact of permafrost on communities and infrastructure. He has mentored over 120 students, inspiring the next generation of northern scientists with his passion for the Arctic and a respect for its people. He is also a member of advisory committees for Canada's northern transportation and mining industries.

"I am humbled to accept the Weston Family Prize," says Dr. Michel Allard. "With the support of fellow scientists, research professionals and graduate students, I've had the privileged opportunity to work closely with the Nunavik and Nunavut communities examining the impacts of permafrost in those regions and the vulnerabilities Inuit and First Nation communities face due to global warming."

Dr. Allard accepted the $100,000 Prize at ArcticNet's international Arctic Change 2017 conference, one of the largest interdisciplinary Arctic research conferences ever held in Canada. The Prize includes a $50,000 award to the recipient, $50,000 to support a postdoctoral fellowship of the recipient's choice, and additional funds for Inuit engagement and travel.

Now in its 7th year, the Weston Family Prize for Lifetime Achievement in Northern Research, donated by The W. Garfield Weston Foundation, honours an individual's leadership and commitment to northern environmental research. Since 2007, the Foundation has focused on northern science and research in Canada due to the notable decline in funding available. To date, the Foundation has committed more than $28 million dollars towards northern scientific research.

About ACUNSFor over thirty years, the Association of Canadian Universities for Northern Studies (ACUNS) has promoted the advancement of northern scholarship through its mandate and programs. ACUNS is a registered charitable organization that operates in Ottawa with volunteer representatives from 30 member institutions across the country.