To Build a Major Scientific Research and Teaching Base for China

HONG KONG, Nov. 8, 2017 /CNW/ -- Dr Lui Che-woo, Chairman and Founder of K. Wah Group (the "Group") and Director of LUI Che Woo Charity, has announced a donation amounting to RMB120 million to the School of Life Sciences of Peking University for setting up the Lui Che Woo School of Life Sciences Fund and constructing a new Life Sciences research building to be named the "Lui Che Woo Building". The donation's signing ceremony was held in Hong Kong today. 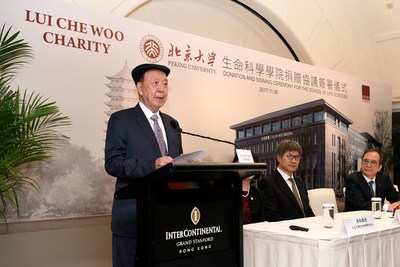 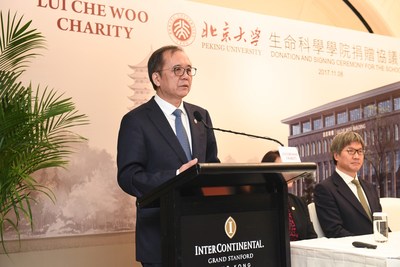 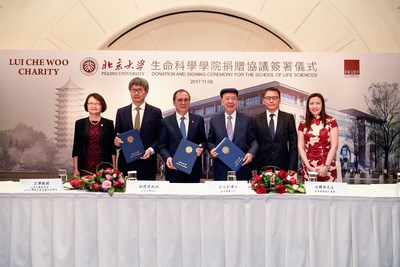 In his speech, Dr Lui Che-woo, said, "Striving to support education and scientific research has been my constant wish throughout the past decades, which I have persistently pursued all these years. Today, I am proud and honoured to be able to play a part in supporting and promoting the research and teaching of life sciences at Peking University and also the construction of a national base for scientific research and teaching relating to key technologies. Gratitude is due to the leadership of Peking University for their broad vision for the future development of mankind, and for their steadfast efforts to drive the development of life sciences in China over the years. I also wish to take this opportunity to encourage tertiary institutions in China to continue their pursuit of far-reaching and innovative research and nurture more scientific research talent for China and the world, and thereby contribute to the well-being of mankind in the future."

The School of Life Sciences Research Building of Peking University -- the "Lui Che Woo Building" -- is scheduled to be completed and to commence operation in early 2018, marking a significant prelude to the 120th anniversary of Peking University. With a total GFA of 26,900 sq. m., the functional purposes of this seven-storey building are to focus on advanced inter-disciplinary research areas of modern life sciences and serve as a high-end facility platform essential for supporting life sciences research. Upon its completion and commencement in operation, the new building is expected to advance the frontier of sciences related to life, cognition and healthcare with substantial impact and profound new direction to life sciences.

Prof Lin Jianhua, President of Peking University, said, "The list of world universities with a history longer than Peking University may be a long one, but I don't think there is any academic institution so closely tied to the fate of its nation as Peking University. You are not only supporting Peking University, but also the country and our future. Today, Dr Lui is helping us build a top-notch facility dedicated to life sciences, to nurturing talent and facilitating life sciences research and study activities. This facility is a precious gift celebrating the 120th anniversary of Peking University and a good deed that will benefit the whole nation, the Chinese people, as well as humanity for generations to come. Thus, I hereby express my deepest respect and gratitude to Dr Lui." Prof Lin has also invited friends from different sectors in Hong Kong to visit the university next year when it celebrates its special anniversary and grow together with the university.

'The Lui Che Woo Prize - Prize for World Civilisation established by Dr Lui does not only focus on one area or one direction, but lays a foundation for betterment of humankind and world civilisation. The Prize exemplifies Dr Lui's abundant mind and his care for world betterment, which also coincides with the philosophy of Peking University,' he said.

"The Phoenix Project" is a national-level central government-led effort to provide large-scale protein science fundamental research facilities funded by the National Development and Reform Commission, the Ministry of Education and the Beijing Municipal Government. As an important contributor to the national "Phoenix Project" initiative, the New Building will be equipped with advanced equipment covering proteins, magnetic resonance and optical microscopic imagery, and also a state-of-the-art cryo scanning electron microscope (Cryo-SEM) to render the best support to the study of structural biology and biological macromolecules. In addition, the New Building will house shared equipment rooms (laboratories), including cold storage, cytology laboratory, thermostatic chamber and ultra-low temperature freezer facilities, covering nearly 550 sq.m. on each floor, providing convenient access and usage to scientists of the university. The research team led by Professor Wu Hong, Dean of the School of Life Sciences of Peking University, will move into the New Building and focus on studying biological macromolecules in tumours and stem cells and also the development of small molecule drugs, helping to solve the mysteries of life and improve human health.

For video highlights of the event, please visit: https://youtu.be/6kWVn_wv_o8