TORONTO, Aug. 15, 2018 /CNW/ - Desert Lion Energy Inc. (TSXV:DLI) (OTCQB: DSLEF) ("Desert Lion" or the "Company") is pleased to announce the next stage in the Company's exploration program, following the completion of the Company's Phase 3 Mineral Resource delineation drilling program. This stage focuses on broader evaluation and exploration of Desert Lion's Exclusive Prospective License ("EPL") 5718 and applications to the north, with the following highlights achieved to date: 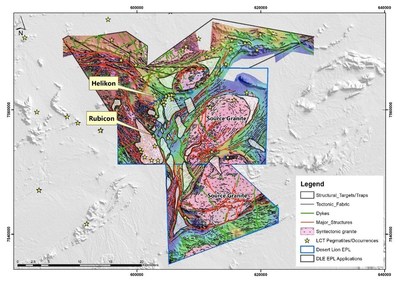 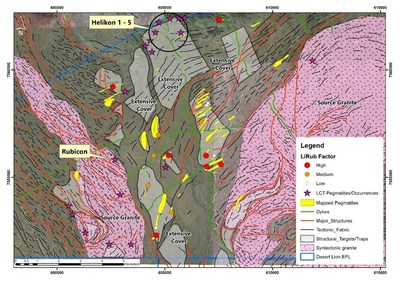 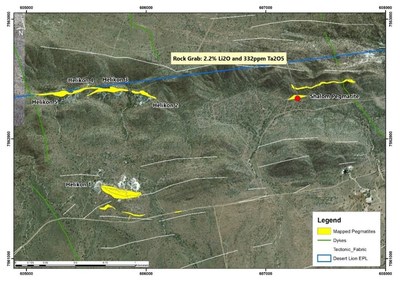 A significant amount of progress has been made by Desert Lion to develop a geological model, which the Company believes will support the discovery of additional LCT pegmatites within the project area, and those which may occur under cover. Preliminary results to date have confirmed potential strike extents to the Helikon 2 – 5 targets and confirmed that the structural corridor has potential to host numerous LCT pegmatites and /or Lithium mineralization. The next phase of work will focus on completing field validation, ranking and mapping and soil sampling targets with the objective of delineating drill targets for testing in Q4 2018.

The Company is currently completing work on its Mineral Resource Estimate (MRE) and Preliminary Economic Assessment (PEA). Desert Lion expects to release its initial MRE by the end of August, with the PEA expected to be released in September.

Most of the regional evaluation to date over Desert Lion's EPL has been guided by the interpretation of the high resolution airborne geophysical (magnetics and radiometric) survey completed during Q1 2018.

The Company engaged a structural consultant in March 2018 to provide a structural and radiometric interpretation over the project to:

A total of 29 targets were generated from the structural interpretation study, with many located within a relatively well-defined north-south trending "Y" shaped structural corridor, which includes many of the known LCT pegmatite occurrences, as well as the Rubicon and Helikon pegmatites. Late stage syntectonic granites occupy the central and eastern parts of the area, with many LCT occurrences being located proximal to, or along the margins of these granitoids (Figure 1).

Due the areal extent of several of the structural targets coupled with soil cover in several parts, a soil geochemical exploration strategy was adopted with the aim of delineating pegmatite occurrences and being guided by LCT pegmatite pathfinder elements (eg. K, Rb, Cs, Be, Ga, Sn, Ta and Nb).

To further define and "fingerprint" more evolved or fractionated pegmatites, such as LCT types, a litho-geochemical study was initiated. The study utilized all litho-geochemical data generated from drilling, outcrop channel sampling, pitting, trenching and rock grab sampling completed over Rubicon, Helikon as well as numerous other outcropping pegmatites (barren and LCT type) located within the EPL.

The study was successful in developing a Fractionation Index ("LiRub"), which has proved to be a practical tool for better defining prospective pathfinder soil anomalies, as well as screening out exposed pegmatite for drill target generation.

A soil orientation program was conducted over two buried, known LCT type pegmatite occurrences to determine the optimum sampling medium and analytical method to use. To address variability of cover, three analytical methods were tested as part of the orientation study:

Both the pXRF and ICP results confirm the presence of the pegmatite (Ionic leach analysis results are pending), its orientation, as well as validating the use of the LiRub factor for use in geochemically "fingerprinting" potential LCT type pegmatites. Due its portability and speed of analysis (along with use of the LiRub Index), the pXRF is considered to be an effective screening tool for the proposed soils program where approximately 6,000 samples are expected to be taken from the various targets during the next quarter.

Approximately 50% of the 29 structural targets have been field validated, resulting in the discovery of at least 30 individual sub parallel outcropping pegmatites all located within the structural corridor. Pegmatites tend to appear as a series/swarms of sub parallel, shallow to steeply dipping bodies with strike lengths of up to 1km and variable thicknesses up to 250 m). In most cases, the pegmatites extend under cover so true extents and widths are yet to be established. In general, most pegmatites encountered are of the undifferentiated feldspar-quartz muscovite type with no visual suggestion of being highly fractionated. Application of the LiRub fractionation index suggests that the pegmatite dykes have LCT affinities and are therefore considered prospective (Figure 2).

Field validation work has been successful in discovering several pegmatites containing lepidolite, petalite and tantalite mineralization. In addition, the Company discovered a zoned sub-outcropping pegmatite, with old workings identified on Ombujomenge farm otherwise known as "Shalom". The "Shalom" pegmatite is inferred to be more than 200 m in length and averages 15 m in thickness; it is zoned from pegmatitic granite, undifferentiated pegmatite to lepidolite and petalite mineralization associated with a quartz core. It appears that the upper parts of the pegmatite have been exposed as evidenced by domal structures (Figure 3).

A rock chip sample taken from the lepidolite bearing zone returned 2.2% Li2O and 332 ppm Ta2O5 . The location of this pegmatite could represent the eastern strike extension of the Helikon 2 – 5 pegmatites, located 1km to the west, with this area presenting an immediate high priority for follow up evaluation (Figure 4).

The exploration models developed in conjunction with Desert Lion's consultants have provided the Company with a focused and structured approach moving forward. The coming months are expected to see completion of all field validation of all targets, followed by ranking and then follow up, which will include additional field mapping and sampling, soil sampling and ultimately drill testing of prospective targets.

The accuracy of the scientific and technical information in this news release has been verified and approved by Mike Venter, Pr.Sci.Nat and VP Exploration for Desert Lion, who is a Qualified Person as defined by National Instrument 43-101 – Standards of Disclosure for Mineral Projects ("NI 43-101"). Mr. Venter has also verified the sampling, analytical and test data underlying the scientific and technical information disclosed herein. The exploration program was directly supervised and executed by Mr. Simon Kahovera, BSc(Geol, Exploration Manager and a Desert Lion employee.

Rock chip and soil sampling completed as part of the validation work and soil orientation work completed over the EPL were taken using methods that follow Desert Lion's internal Standard Operating Procedures that are based on CIM Best Practice Guidelines.

For this part of the exploration program, Desert Lion has used two internationally accredited analytical laboratories for the preparation and analyses of its samples: ALSChemex (Ireland) and SetPoint Laboratories (Johannesburg), each of which is independent of Desert Lion. Over and above the laboratory quality assurance quality control ("QA/QC") procedures routinely implemented by both labs using pulp duplicate analysis, Desert Lion has developed an internal QA/QC protocol which utilizes Certified Reference Materials ("CRMs"), blanks and coarse crush duplicates on a systematic basis with the samples shipped to the analytical laboratories, as follows: 1 standard, 1 duplicate and 1 blank are inserted every 30 samples (giving an average of c.10%). The soil orientation samples assayed at ALSChemex were processed using the following method: ME-MS23 (Ionic Leach using NaCN leach and chelating agents ammonium chloride, citric acid and EDTA followed by ICP-MS). The soil and rock samples analysed at Setpoint were processed using the following method M448 (Na peroxide fusion followed by ICP-MS).

For pXRF analyses, a NITON XL3-950 analyser operating at 50kV and using a SDD detector was used. Data was processed by means of the NITON NDT program and all data reported to an Excel spread sheet. Samples were analysed on screened -180µm fraction soil samples

In the QP's opinion, there are therefore no factors that could impact on the accuracy or reliability of these results.

About Desert Lion Energy Desert Lion Energy is an emerging lithium development company focused on building Namibia's first large-scale lithium mine to be located approximately 210 km from the nation's capital of Windhoek and 220 km from the Port of Walvis Bay. The Company's Rubicon and Helikon mines are located within a 301 km2 prospective land package, with known lithium bearing pegmatitic mineralization and the Company is currently in Phase 1 of its production plan, producing and exporting lithium concentrate from stockpiled material. The project site is accessible year-round by road and has access to power, water, rail, port, airport and communication infrastructure.

This news release contains "forward-looking information" within the meaning of applicable securities laws. Generally, any statements that are not historical facts may contain forward-looking information, and forward-looking information can be identified by the use of forward-looking terminology such as "plans", "expects" or "does not expect", "is expected", "budget" "scheduled", "estimates", "forecasts", "intends", "anticipates" or "does not anticipate", or "believes", or variations of such words and phrases or indicates that certain actions, events or results "may", "could", "would", "might" or "will be" taken, "occur" or "be achieved." Forward-looking information includes, but is not limited to: statements and expectations regarding the timing for the completion of the next phase of the Company's exploration program and the delineation of drill targets; the expected size and timing of the Company's soil program; the timing for the completion of the MRE and PEA; and the Company's planned work program for the project and its exploration and development schedule and timetable. Forward-looking information is based on certain factors and assumptions management believes to be reasonable  at the time such statements are made, including but not limited to, continued exploration activities, lithium and other metal prices, the estimation of initial and sustaining capital requirements, the estimation of labour and production costs, the estimation of mineral reserves and resources, assumptions with respect to currency fluctuations, the timing and amount of future exploration and development expenditures, receipt of required regulatory approvals, the availability of necessary financing for the Project, permitting and such other assumptions and factors as set out herein.

Forward-looking information is subject to known and unknown risks, uncertainties and other factors that may cause the actual results, level of activity, performance or achievements of the Company to be materially different from those expressed or implied by such forward-looking information, including but not limited to: risks related to changes in lithium prices; sources and cost of power and water for the Project; the estimation of initial capital requirements; the lack of historical operations; the estimation of labour and operating costs; general global markets and economic conditions; risks associated with exploration, development and operations of mineral deposits; the estimation of initial targeted mineral resource tonnage and grade for the Project; risks associated with uninsurable risks arising during the course of exploration, development and production; risks associated with the estimation of targeted production tonnages from Phase 1 operations; risks associated with currency fluctuations; environmental risks; competition faced in securing experienced personnel; access to adequate infrastructure to support exploration activities; risks associated with changes in the mining regulatory regime governing the Company and the Project; completion of the environmental assessment process; risks related to regulatory and permitting delays; risks related to potential conflicts of interest; the reliance on key personnel; financing, capitalization and liquidity risks including the risk that the financing necessary to fund continued exploration and development activities at the Project may not be available on satisfactory terms, or at all; the risk of potential dilution through the issuance of additional common shares of the Company; the risk of litigation.

Desert Lion Energy Corp. is a lithium developer and producer, focused on building Namibia’s first large-scale lithium mine, and is located 30km from Karibib and approximately 210km from the nation’s capital of Windhoek. Desert Lion’s lithium project is located within a...