VANCOUVER, Aug. 23, 2018 /CNW/ - The self-titled 'Social Media Influencers' have created their own generational niche. For the most part, they're attractive young women, who have honed the art of looking slightly away from the camera and having an incredible time.

While they work perfectly for fashion and lifestyle brands who have a clear demographic match, there are an incredible amount of brands and PR agencies who are trying to jump on their engagement bandwagon without a clear alignment. 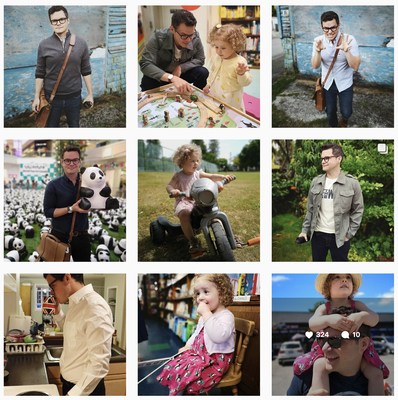 Long gone are the days of the Mad Men, disconnected fathers, and expectations of mothers to run the household single-handedly. At least this is the case in the modern household, but not necessarily in the eyes of some brands aimed at parents.

Aside from stores like Canadian Tire, car brands, BBQ, or garden supply companies, the fathers are often considered as an afterthought, thanks to consumer research created 'consumer personas'. These personas are how the company doing the marketing segment their audience into who they target down to specific demographic data like location, age, salary scale, hobbies, and marital status. They are almost all female.

This seems a little outdated though. As a sweeping statement, modern fatherhood is a much more involved affair.

When new parents are getting prepared for new responsibilities, they tend to pick up a copy of 'What to Expect When You're Expecting'. Also on the same, packed shelves were hundreds of books, based on both fact and opinion about ways to be the best parent, deal with issues and use a variety of methods to raise the best human. There are only ever a few books for the dad, and they are almost all novelty in their nature, surely aimed at being a fun gift to the expectant dad.

This was expanded upon by Kevin McKeever on CityDadsGroup.com, where the charge to get Amazon to switch the name on the US site was lead by stay-at-home father, Oren Miller of A Blogger and Father. Following Miller's battle with lung cancer, his friends and supporters supported the cause in his name.

"It's not about a name and it's not about me personally being offended …," Miller wrote. "It's about a company that looks at the U.S., then looks at England, and then decides that over there, parent equals mom or dad, while here, well, we're not ready for that yet…" [article link]

Even in 2017, we see ads portrayed as bumbling mom-replacements whenever she leaves the house. How will the dad cope? He's just a man.

Somehow, dads have managed to become an equal member of the modern household. They are active in the baby's room changing diapers, in the laundry, and in the kitchen. In fact according to a survey by the Bureau of Labor Statistics, from 2003 to 2015, male parents being involved with food prep and cleaning has risen 22% from 35% to 43%.

While the brand-voice personas are targeting women who do the majority of the household grocery shopping, the same study showed that for every 60 minutes Mom is buying food, Dad is spending 54 minutes. Isn't he worth saying 'Hi' to?

What about the homes with two dads running the show? Are they both bumbling around, disheartened by their lack of inherent knowledge and tripping over themselves as they figure out the washing machine? Of course not. Research shown in a New York Times article estimates the LGBTQ+ market is worth $70 billion in the US. As consumers are not just accepting, but advocating for the community's rights, brands are finding out that showing support for equality makes sense for the business.

Now brands can establish that there are dads who are worth talking to, and here's how brands can define them.

Millennial Dads: Aged between 30-34, these guys were born in the mid-1980s. They're online savvy, read reviews, are active on social media and understand the value of being connected. They're often into fitness, fashion, and brands who are actively doing something about the climate, being sustainable, or having a voice in the social conversation.

Gen Y: Aged between 35-39 and are millennial in spirit. They are trying to keep up with their slightly older kids' fascination with technology and everything online. Sometimes fearing that they're going to be left behind, they look to research and ask fellow dads for their advice.

I'm not 50 yet!: 40-49-year-olds, with their kids becoming teenagers. They've given up hope of having their dream car in exchange for a more practical minivan or station wagon, but are "totally ok with it". These dads have settled into home ownership, paying off their mortgage and making solid plans to invest in their kids for a bright future.

The Dad Bloggers: As a brand marketer, these are your go-to dads. They're incredibly supportive of each other. Due to the lack of resources, we share learned knowledge, tips we've figured out along the way, wins, losses, and which brands are worth putting in the shopping cart.

Dad Bloggers are socially-connected and engaged with their audience. We understand what's important in a brand relationship and create real content that provides a real insight into their side of the everyday parenting struggles and triumphs.

The Dad Bloggers are here and can't wait to help you talk to other men, impassioned about being fathers, raising their kids, doing their part in a loving relationship and as an active part of their household.

For more information, for interviews or to request podcast chats, visit www.SocialDad.ca.

Hi, I'm James and I'm a new Dad. I know nothing, apart from what I'm figuring out as I bumble along. I talk about my adventures through Dad-life via the blog, social, and on the SocialDad Podcast.

Feel free to get in touch via [email protected] or Tweet me – @JamesRCS.

Thanks to Cision for sponsoring this announcement.