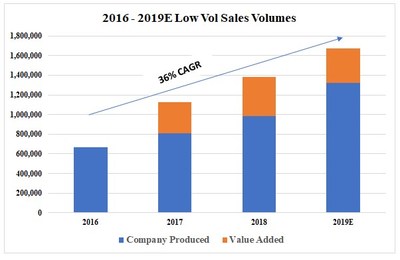 George Dethlefsen, Chief Executive Officer of Corsa, commented, "Fourth quarter profitability was driven by a strong performance from our operations as well as an increase in realized coal pricing.  The fourth quarter marked our best performance for the year for adjusted EBITDA, metallurgical coal production volumes and cash production cost per ton sold.  The benefits of the mine development work and mining equipment investments made in the first half paid dividends in the second half of the year, as cash mining costs declined by 16%, and production at our Casselman and Acosta mines collectively increased by 50% over first half levels.  All our mines are well positioned heading into 2019.  Casselman, Acosta and Horning all have newly rebuilt equipment, development work at both Casselman and Horning has been completed, and the Acosta mine is fully ramped up and producing at capacity.

Our Company's growth story continues to produce results and has a positive outlook.  2018 marked the second consecutive year of over 20% metallurgical coal production growth for Corsa.  We are forecasting 33% growth in metallurgical coal production levels in 2019, as the Horning and Schrock Run mines add to our volumes and as we get a full year of run-rate production levels from the Casselman and Acosta mines.  We expect to receive the Keyser and North mine permits during the first half of 2019.  In 2018, Value Added Services purchased coal volumes grew by 27%, Sales and Trading volumes grew by 41%, and overall metallurgical coal sales were up by 27% for the year.  Growth remains a high priority for the Company as we seek to increase utilization rates at existing infrastructure and benefit from economies of scale.

Customer demand remains very healthy owing to strong global steel production levels and profitable steel prices.  Metallurgical coal supply concerns in Australia related to production interruptions, flooding, port congestion and labor stoppages have kept the market tight.  The calendar 2019 forward curve for premium low vol pricing is above $195/mt FOB Vessel, suggesting that supply and demand fundamentals will remain very tight over the course of the year.  As a result of limited global production growth and continued strength in steel pricing, as of yesterday, the forward curve is now showing pricing above $170/mt FOB Vessel through 2022.  The US export terminal congestion issues have improved, and with the reduction in export thermal pricing, we see less competition from thermal coal for space at the export terminals in the months ahead.  Looking forward, we expect reduced demurrage expenses as compared to what we experienced in 2018.

We continue to expect a robust 2019, as our mines are well positioned from a geologic and equipment standpoint, and as prices remain above historical averages.  We are forecasting strong free cash flow over the course of the year, which we will use to pay down our term loan and continue to pursue growth."

Corsa's guidance for the year ending December 31, 2019 is as follows:

The fourth quarter of 2018 continued the theme of global supply-side challenges that were present throughout the earlier part of the year. Metallurgical coal mines in Australia encountered geological issues that resulted in mines being shut down, port and railroad worker strikes and weather impacting the availability of their coal ports. The United States had similar challenges with a large metallurgical coal producer filing bankruptcy; a hurricane hitting the U.S. East Coast ("USEC"), which slowed port and rail operations; and other operational issues, which limited deliveries. These events kept the market focused on supply-side issues and kept spot pricing strong to end the year.  Spot prices for Australian premium low volatile metallurgical coal finished at $220/metric ton ("mt") from beginning the quarter at $213/mt while USEC low volatile coal remained steady in $197-198/mt.  The futures market for 2019 has remained constructive with prices north of $195/mt. The strength of the metallurgical coal forward curve for 2019 withstood pressure from the late December downturn in the global equity markets and other commodity markets, suggesting that fundamentals remain tight.

Global steel production finished up 4.5% on the year and, excluding China, the rest of the world grew at 2.3%, according to the World Steel Association. Chinese steel production grew 6.6%, while India was up 4.9% and the U.S. was up 6.2%. The strong global steel markets continue to drive a healthy U.S. export coal market. Total annual U.S. metallurgical coal exports were 49.5 million mt which was up 10% on the year. The U.S. also experienced strong steam coal export volumes which finished up 34% at nearly 45 million mt.  Both the U.S. steam and metallurgical coal markets competed for export capacity which was already tight to begin 2018. Recently, steam coal prices have softened $17/mt in the prompt quarter which could help alleviate congestion, storage space and rail service for metallurgical coal. We have witnessed improved rail performance as we finished 2018.

Refer to Corsa's audited consolidated financial statements for the years ended December 31, 2018 and 2017 and related management's discussion and analysis, filed under Corsa's profile on www.sedar.com, for details of the financial performance of Corsa and the matters referred to in this news release.

Corsa defines adjusted EBITDA as EBITDA (earnings before deductions for interest, taxes, depreciation and amortization) adjusted for change in estimate of reclamation provision for non-operating properties, impairment and write-off of mineral properties and advance royalties, gain (loss) on sale of assets and other costs, stock-based compensation, non-cash finance expenses and other non-cash adjustments.  Adjusted EBITDA is used as a supplemental financial measure by management and by external users of our financial statements to assess our performance as compared to the performance of other companies in the coal industry, without regard to financing methods, historical cost basis or capital structure; the ability of our assets to generate sufficient cash flow; and our ability to incur and service debt and fund capital expenditures.

All scientific and technical information contained in this news release has been reviewed and approved by Peter V. Merritts, Professional Engineer and the Company's President - NAPP Division, who is a qualified person within the meaning of National Instrument 43-101 - Standards of Disclosure for Mineral Projects.

The estimated coal sales, projected market conditions and potential development disclosed in this news release are considered to be forward looking information.  Readers are cautioned that actual results may vary from this forward-looking information.  Actual sales are subject to variation based on a number of risks and other factors referred to under the heading "Forward-Looking Statements" below as well as demand and sales orders received.

Certain information set forth in this press release contains "forward-looking statements" and "forward-looking information" (collectively, "forward-looking statements") under applicable securities laws. Except for statements of historical fact, certain information contained herein relating to projected sales, coal prices, coal production, mine development, the capacity and recovery of Corsa's preparation plants, expected cash production costs, geological conditions, future capital expenditures and expectations of market demand for coal,  constitutes forward-looking statements which include management's assessment of future plans and operations and are based on current internal expectations, estimates, projections, assumptions and beliefs, which may prove to be incorrect. Some of the forward-looking statements may be identified by words such as "estimates", "expects" "anticipates", "believes", "projects", "plans", "capacity", "hope", "forecast", "anticipate", "could" and similar expressions. These statements are not guarantees of future performance and undue reliance should not be placed on them. Such forward-looking statements necessarily involve known and unknown risks and uncertainties, which may cause Corsa's actual performance and financial results in future periods to differ materially from any projections of future performance or results expressed or implied by such forward-looking statements. These risks and uncertainties include, but are not limited to: risks that the actual production or sales for the 2019 fiscal year will be less than projected production or sales for this period; risks that the prices for coal sales will be less than projected; liabilities inherent in coal mine development and production; geological, mining and processing technical problems; inability to obtain required mine licenses, mine permits and regulatory approvals or renewals required in connection with the mining and processing of coal; risks that Corsa's preparation plants will not operate at production capacity during the relevant period, unexpected changes in coal quality and specification; variations in the coal mine or preparation plant recovery rates; dependence on third party coal transportation systems; competition for, among other things, capital, acquisitions of reserves, undeveloped lands and skilled personnel; incorrect assessments of the value of acquisitions; changes in commodity prices and exchange rates; changes in the regulations in respect to the use, mining and processing of coal; changes in regulations on refuse disposal; the effects of competition and pricing pressures in the coal market; the oversupply of, or lack of demand for, coal; inability of management to secure coal sales or third party purchase contracts; currency and interest rate fluctuations; various events which could disrupt operations and/or the transportation of coal products, including labor stoppages and severe weather conditions; the demand for and availability of rail, port and other transportation services; the ability to purchase third party coal for processing and delivery under purchase agreements; and management's ability to anticipate and manage the foregoing factors and risks. The forward-looking statements and information contained in this press release are based on certain assumptions regarding, among other things, coal sales being consistent with expectations; future prices for coal; future currency and exchange rates; Corsa's ability to generate sufficient cash flow from operations and access capital markets to meet its future obligations; the regulatory framework representing royalties, taxes and environmental matters in the countries in which Corsa conducts business; coal production levels; Corsa's ability to retain qualified staff and equipment in a cost-efficient manner to meet its demand; and Corsa being able to execute its program of operational improvement and initiatives. There can be no assurance that forward-looking statements will prove to be accurate, as actual results and future events could differ materially from those anticipated in such statements. The reader is cautioned not to place undue reliance on forward-looking statements. Corsa does not undertake to update any of the forward-looking statements contained in this press release unless required by law. The statements as to Corsa's capacity to produce coal are no assurance that it will achieve these levels of production or that it will be able to achieve these sales levels.