/NOT FOR DISTRIBUTION TO U.S. NEWSWIRE SERVICES OR FOR DISSEMINATION IN THE UNITED STATES OF AMERICA. ANY FAILURE TO COMPLY WITH THIS RESTRICTION MAY CONSTITUTE A VIOLATION OF U.S. SECURITIES LAWS./

VANCOUVER, July 2, 2019 /CNW/ - Further to the joint news releases dated May 08, 2019 and May 27, 2019, Colorado Resources Ltd. (TSXV: CXO) ("Colorado") and Buckingham Copper Corp. ("Buckingham") are pleased to announce that they have signed the binding Arrangement Agreement that will result in the acquisition of Buckingham by Colorado, along with the addition of new Colorado Board members and management, and a minimum $2.5 million concurrent financing. 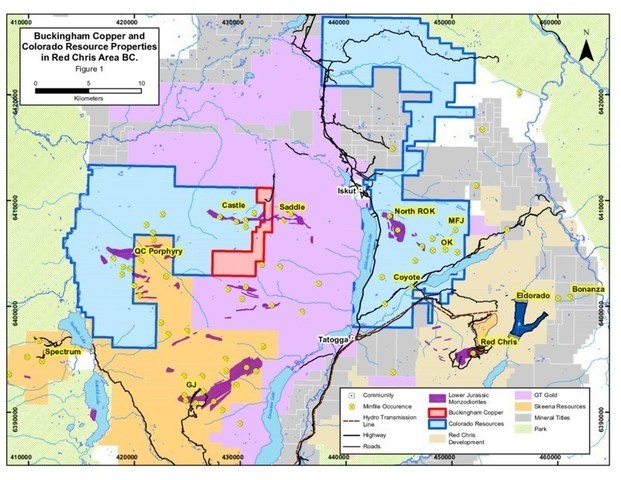 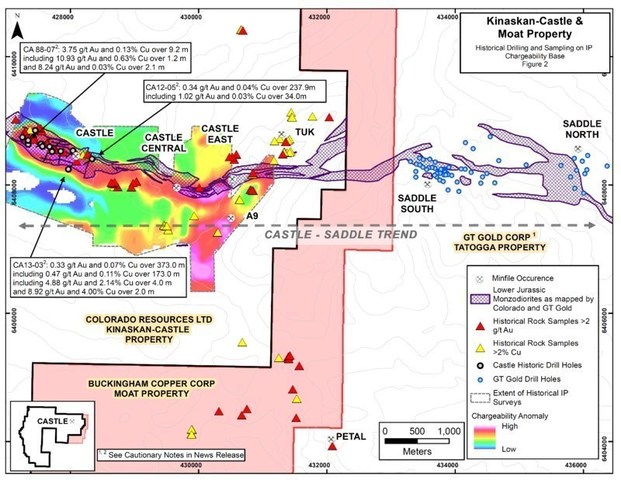 The acquisition of Buckingham by Colorado by Plan of Arrangement is expected to be completed on or around August 13, 2019, following corporate and regulatory approvals. Details are summarized below. Upon completion of the Arrangement, a $1.4 million exploration program, including drilling, is expected to immediately commence on Colorado's Kinaskan-Castle Property.

Important aspects of the Plan of Arrangement:

2019 Exploration PlansA key result of the takeover will be the consolidation of Colorado's Kinaskan-Castle property with Buckingham's Moat property in the Red Chris district of the Golden Triangle of northwestern BC (see Figure 1).

The combined, "Castle" property is 19,256 hectares in size, and lies directly west of and on-strike from Saddle South epithermal gold-silver and Saddle North porphyry copper-gold discoveries on GT Gold's Tatogga property. Drilling in 2018 on Saddle North by GT Gold intersected very long intervals of copper-gold mineralization, including hole TTD093 that intersected 0.51 g/t Au, 0.30 % Cu, 0.93 g/t Ag over 904.12 m, beginning at 15.00 m (see GT Gold News Release of October 10, 2018). The reader is cautioned that results or information from an adjacent property does not infer or indicate similar results or information will or does occur on the Castle property.

The planned exploration program, budgeted at $1.4 million including drilling, that has been designed for the Castle property is expected to commence in August. A phase-1 work program will include prospecting, geological mapping, and geochemical, magnetic and Induced Polarization (IP) surveys to in-fill a nearly two km-long, high-priority gap in data along the eastern Castle property boundary with GT Gold (see Figure 2). A phase-2 program, scheduled for late summer, is expected to comprise drilling of up to 2,500 m on high priority targets already developed, including Castle East described below, and new targets from the phase-1 work.

Castle-Saddle TrendThe newly recognized Castle-Saddle Trend crosses west to east from the Castle property onto the Tatogga property of GT Gold (see Figure 2). The Trend is >10 km in length and 1-2 km wide, and is defined by an east-west trending zone of structural disruption, pervasive and continuous quartz-sericite-pyrite alteration and local potassic alteration that follow an elongate intrusion of Lower Jurassic monzodiorite and monzonite.

While there were significant discoveries by GT Gold at Saddle South in 2017 and Saddle North in 2018, only limited exploration has taken place on the Castle portion of the Trend. At the Castle Au-Cu prospect at the western end of the Trend, drilling of 4,827.2 m in 21 drillholes by previous operators in 1988 and 2012-2013 intersected broad low-grade Au-Cu values and narrow higher-grade Au-Cu intervals (see Figure 2). Nevertheless, there has been no drilling for 5 km along the trend in an eastward direction toward Saddle South.

Initial Drill TargetsDrill hole targeting has already begun based on existing data, and will be augmented by the planned expanded surveys. An initial high priority target for drilling is the Castle East anomaly located 2.5 km west of GT Gold's Saddle South Au-Ag deposit. The Castle East target was partially defined by IP ground surveys in 2017 and 2018, and remains open for expansion, and has never been drilled. Here a strong 400 m x 750 m oval-shaped, high chargeability anomaly was identified on two IP lines that cross prospective monzonite and intermediate volcanic rocks that are pyrite-sericite altered and structurally disrupted. This chargeability feature (20 to 40 millivolts per volt), is coincident with an ovoid magnetic low, and is partially overlain and flanked by a strong copper-gold soil anomaly some 1200 m by 300 m in size with values of >300 ppm Cu and >100 ppb Au. Three initial drill holes have been selected for this target, and a drill permit is in place.  Several other IP, geochemical and geological targets require limited additional ground surveys prior to drilling.

Details of the Plan of ArrangementThe Arrangement will be implemented under the Business Corporations Act (British Columbia) pursuant to Section 288. Buckingham Shareholders will receive Colorado Shares based on the Exchange Ratio. The Arrangement will be an Arm's Length Transaction pursuant to the policies of the Toronto Stock Exchange and the TSX Venture Exchange. Upon closing of the Arrangement: all unexercised Buckingham Share purchase warrants will be exchanged for warrants to purchase Colorado Shares on the basis of the Exchange Ratio, will have a 12 cent strike price and will expire 3 years from the date of the amendment to the warrant certificates.

The Agreement is dated June 27, 2019, and contains representations and warranties for the benefit of each of Colorado and Buckingham, conditions relating to shareholder, court, and regulatory approvals, material adverse changes, and compliance with the Agreement as are in each case customary in comparable transactions of this nature.  Completion of the Arrangement is subject to a number of conditions being satisfied or waived by one or both of Colorado and Buckingham at or prior to closing of the Arrangement, including: approval of the holders of Buckingham Shares, and warrants, together with any requisite minority approvals; receipt of all necessary regulatory and court approvals; and the satisfaction of certain other closing conditions customary for a transaction of this nature as well as approval from Newmont Goldcorp.

Status of FinancingThe minimum $2.5 million financing has been arranged through commitment letters (see news release dated May 27, 2019), and Subscription Receipts are currently being collected. The financing will close concurrent to the proposed transaction.

Lead orders for the financing have been committed by institutions including the Konwave AG/ Gold 2000 family of funds in Zurich.

ABOUT COLORADO Colorado Resources Ltd. is currently engaged in the business of mineral exploration for the purpose of acquiring and advancing mineral properties located in the "Golden Triangle" British Columbia. The Company's main exploration projects within British Columbia include KSP, North ROK, Kingpin and Kinaskan-Castle.

ABOUT BUCKINGHAM Buckingham Copper Corp. is an unlisted public reporting Canadian Exploration Company focused on exploring and developing its Sofia and Moat Properties. The Properties are located in the Toodogone and Golden Triangle districts respectively, in British Columbia. For additional information please visit www.sedar.com.