PERTH, Western Australia, Sept. 27, 2018 /CNW/ - Chalice Gold Mines Limited (TSX:CXN; ASX:CHN), ("Chalice" or the "Company) is pleased to announce that it is gearing up for its maiden drilling program at the Pyramid Hill Gold Project, located north-west of the Bendigo Goldfield (not owned by the Company) in central Victoria. 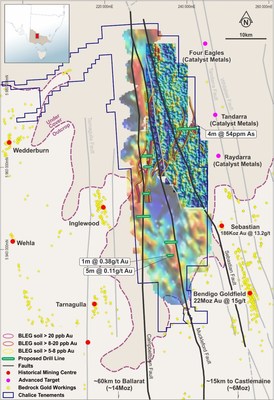 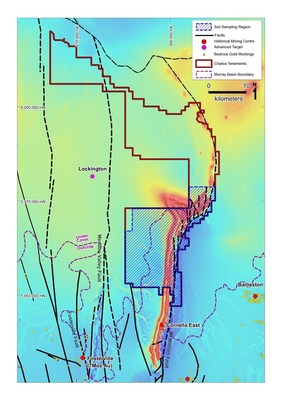 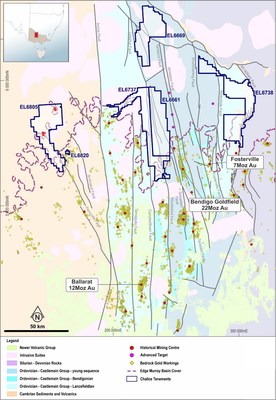 The Company has made significant progress in advancing exploration activities at Pyramid Hill over the last two months. Successful targeting work has culminated in the identification of three large-scale priority gold targets which will be tested by an initial 8,500m Reverse Circulation/Aircore drill program due to commence next month.

Drilling is designed to test the West and East gold-in-soil geochemical targets (West and East Anomalies), as previously validated by the Company in July 2018, together with prominent gravity features identified from a recently completed 250-line km ground gravity survey and a historic airborne Falcon gravity survey.

An 8,500m program of RC/Aircore drilling is planned over seven drill traverses that are located between 20-50km north-west of the town of Bendigo (Figure 1). Four of the seven drill traverses will test the two largest gold-in-soil anomalies identified to date (the West and East Anomalies), each of which extend over a 12km strike length, with drilling prioritised over gravity highs which are interpreted as 'buried hills' beneath Murray Basin cover, where bedrock should be closer to surface. The southernmost two drill lines will test a large-scale gravity anomaly associated with the prospective Muckleford fault in the same area that reported anomalous gold in historic drill holes, including 1m @ 0.38g/t Au and 5m @ 0.11 g/t Au.

Drilling has previously been attempted in the vicinity of the West and East Anomalies, although historical Aircore drilling was almost entirely ineffective with most drill-holes terminated within barren Permian tillite cover – which is known to occur throughout part of EL6661. Chalice plans to utilise RC drilling in these areas of deeper cover in order to provide the first effective test of the underlying Bendigo Zone succession (including saprolite) which hosts the primary gold deposits of the Central Victorian goldfields.

All planned drill traverses are at least 3.2km apart, reflecting the district-scale approach to the Company's initial drill testing at the Pyramid Hill Gold Project. Any anomalous results will provide an immediate target for follow-up drill testing and the Company is confident it can fast-track drilling approvals to facilitate a continued aggressive approach to drilling on the project.

EL6738 comprises a westernmost succession of Bendigo Zone sediments, which is the same rock sequence that hosts the Fosterville gold deposits, and an older succession of volcanics and sediments that define a strongly magnetic trend in the eastern part of EL6738. Soil sampling has been designed in areas amenable to surface geochemistry – which are areas with less than 100m depth of cover to basement. Gold deposits and occurrences are known throughout both successions, which attests to the prospectivity of the Company's tenement-holding (Figure 3).

RC/Aircore drilling is expected to commence in late October, subject to approvals.

Assays are expected to be received shortly for soil sampling completed within the southern part of EL6737. These results will be reviewed and integrated with recently completed ground gravity data to work up the next phase of drill targets.  Soil sampling on EL6738 will continue this month and is expected to be completed by mid-October with assays to follow in mid-November.

Chalice's Chief Executive Officer Alex Dorsch said: "Our exploration team has made significant progress at Pyramid Hill over the last three months, working up an extremely large area in a short time-frame. We are very excited about the upcoming maiden drill program, which will target the same regional faults that host multi million-ounce gold deposits in the Bendigo region.

"We believe this a great opportunity for our shareholders to be part of the continued reinvigoration of one of Australia's premier goldfields, which is continuing to deliver exceptional mining and exploration results. We look forward to releasing results from drilling in due course."

The 100%-owned Pyramid Hill Gold Project covers an area of 3,080km2 north of Bendigo, Victoria. The Project extends to the north-west of the Bendigo Goldfield and to the north-east to the Fosterville Gold Mine owned by Kirkland Lake Gold (NYSE /TSX: KL | ASX: KLA).

For further details on sampling techniques, please refer to the announcement entitled "Chalice to drill large-scale gold targets at Pyramid Hill", dated September 27, 2018,  which can be found on the Company's website at www.chalicegold.com/investor-relations/asx-announcements/.

The information in this report that relates to Exploration Results in relation to the Company's Projects is based on information compiled by Dr. Kevin Frost BSc (Hons), PhD, who is a Member of the Australian Institute of Geoscientists. Dr. Frost is a full-time employee of the company and has sufficient experience in the field of activity being reported to qualify as a Competent Person as defined in the 2012 edition of the Australasian Code for Reporting of Exploration Results, Minerals Resources and Ore Reserves, and is a Qualified Person under National Instrument 43-101 – 'Standards of Disclosure for Mineral Projects'. The Qualified Person has verified the data disclosed in this release, including sampling, analytical and test data underlying the information contained in this release.  Dr. Frost consents to the release of information in the form and context in which it appears here.

Forward-looking statements relate to future events or future performance and reflect Company management's expectations or beliefs regarding future events and include, but are not limited to, the estimation of mineral reserve and mineral resources, the realisation of mineral resource estimates, the likelihood of exploration success at the Company's projects, the prospectivity of the Company's exploration projects, the timing of future exploration activities on the Company's exploration projects, planned expenditures and budgets and the execution thereof, the timing and availability of drill results, potential sites for additional drilling,  the timing and amount of estimated future production, costs of production, capital expenditures, success of mining operations, environmental risks, unanticipated reclamation expenses, title disputes or claims and limitations on insurance coverage.

In certain cases, forward-looking statements can be identified by the use of words such as "plans", "planning" "expects" or "does not expect", "is expected", "will", "may", "would", "potential", "budget", "scheduled", "estimates", "forecasts", "intends", "anticipates" or "does not anticipate", "believes" , "occur" or "be achieved" or variations of such words and phrases or statements that certain actions, events or results may, could, would, might or will be taken, occur or be achieved or the negative of these terms or comparable terminology.  By their very nature forward-looking statements involve known and unknown risks, uncertainties and other factors which may cause the actual results, performance or achievements of the Company to be materially different from any future results, performance or achievements expressed or implied by the forward-looking statements.

Such factors may include, among others, risks related to actual results of current or planned exploration activities; changes in project parameters as plans continue to be refined; changes in exploration programs based upon the results of exploration; future prices of mineral resources; possible variations in mineral resources or ore reserves, grade or recovery rates; accidents, labour disputes and other risks of the mining industry; delays in obtaining governmental approvals or financing or in the completion of development or construction activities; as well as those factors detailed from time to time in the Company's interim and annual financial statements, all of which are filed and available for review on SEDAR at sedar.com.