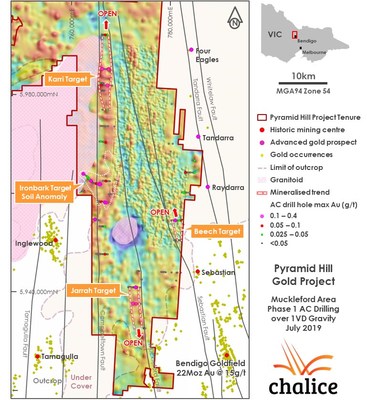 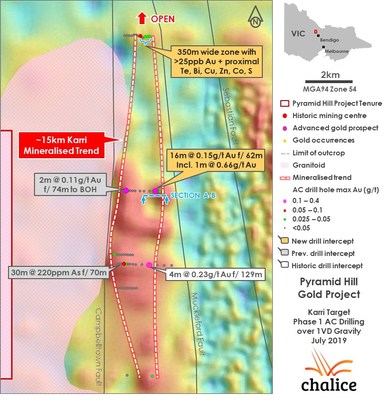 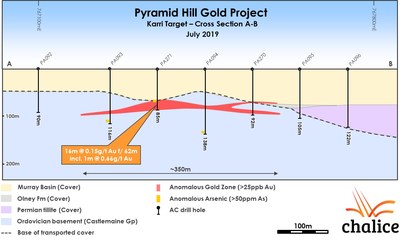 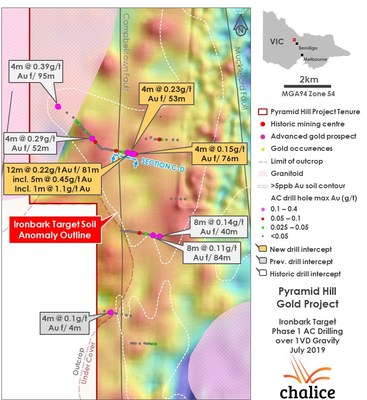 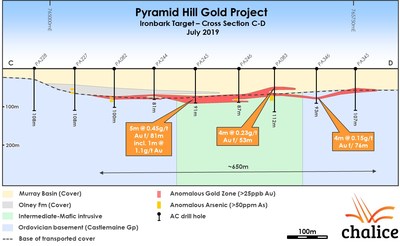 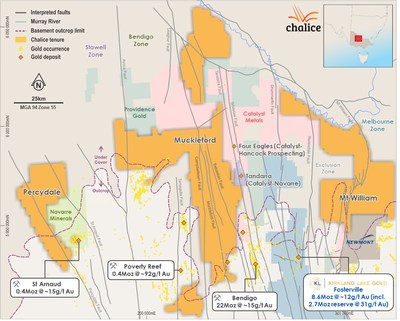 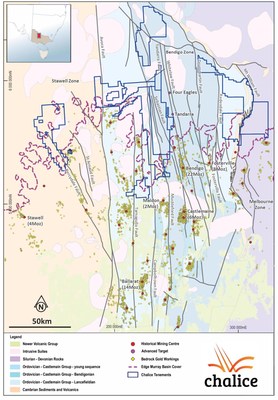 Planning is underway for tighter spaced infill and step-out AC drilling on these targets, with a restart of drilling envisaged in mid-late Q3 2019.

Commenting on the recent results and forward plan, Chalice's Managing Director, Alex Dorsch said: "The new broad zones of gold and pathfinder elements are significant given the wide-spaced reconnaissance nature of the initial phase of drilling. To have three laterally extensive areas of bedrock gold anomalism defined so early is promising."

"Gold exploration under cover requires a different approach to normal mineral exploration; a first pass of shallow drilling to the top of the basement essentially aims to provide a geochemical vector to mineralised systems. From there we will drill on tighter spacing and deeper, continually refining and strengthening the vector."

"Importantly, other gold discoveries undercover in this region originated from similar low-level anomalous gold and pathfinder intercepts on wide-spaced shallow AC drilling. This gives us confidence that our systematic approach to exploration at Pyramid Hill is the best way to vector towards mineralisation which could ultimately lead to a world-class high-grade gold discovery."

"We are encouraged by what we see at the Karri, Ironbark and Beech Targets, particularly the scale and strike extent of the footprints. The newly defined targets demonstrate progress on the Project and provide us with an immediate focus for the next phase of systematic infill and step-out AC drilling."

"Chalice is in a strong position as a junior company, having the financial resources to explore at scale in this high grade but underexplored gold province, which continues to capture global attention. The recent divestment of our Quebec gold projects adds further strength to our balance sheet and ensures we are well funded to continue ahead at pace."

Muckleford Phase 1 AC DrillingA total of 349 AC drill holes (34,929m) have been completed at the Muckleford Area (EL6661, 6737 and 6901), 20-70km north-west of the Bendigo Goldfield (~22Moz Au). All assay results have now been received. The drilling to date has been successful in identifying three high-priority target areas; Karri, Ironbark and Beech (Figure 2).

Two reconnaissance AC lines spaced ~7km apart (drill holes spaced at 100m intervals) tested a ~2km wide corridor of Castlemaine Group situated favourably between the interpreted trends of the Campbelltown and Muckleford Faults. These regional structures host two significant goldfields (~14Moz Au Ballarat and ~2Moz Au Maldon) in the Bendigo Zone to the south (amongst others) and appear to converge towards the northern end of the Karri Target, creating a favourable structural setting for orogenic gold mineralisation.

The Karri Target remains untested by drilling between the two ~7km spaced AC drill lines and provides a clear target for additional step-out AC drilling to further delineate and vector towards a potential gold discovery.

Previously announced AC drilling by Chalice ~3km to the south identified a zone of strong arsenopyrite mineralisation (30m @ 220ppm As from 70m) with associated quartz veining. This result together with a historic drill result of 4m @ 0.23 g/t Au from 129m on the same drill line provides indications of a potentially strike-extensive mineralised system.

Ironbark TargetThe Ironbark Target is located south of Karri along the same broad strike-extensive gravity anomaly, in the same area in which Chalice previously announced a significant >5ppb gold-in-soil anomaly (with a maximum value of 276ppb Au) (Figure 5).

A broad sub-horizontal zone of gold anomalism (>25ppb Au) was encountered in 7 successive drill holes over ~650m and localised within weathered basement (Figure 6).

Beech TargetAs previously announced, reconnaissance drilling at the newly named Beech Target returned strongly anomalous arsenic (up to 8500ppm As) and antimony (up at 40ppm Sb) in hole PA136, which is the strongest arsenic anomalism received on the project to date.

Jarrah TargetAs previously announced, elevated gold (2m @ 0.12g/t Au from 45m by Chalice and historic intercepts of 1m @ 0.38g/t Au from 16m and 5m @ 0.11g/t Au from 6m) has been intersected within Murray Basin gravels overlying the Castlemaine Group sediments at the newly named Jarrah Target. The Target is defined over ~3km of strike corresponding with a broad north-south trending gravity anomaly.

No primary bedrock sourced gold has been intersected to date at the Target. As such, additional reconnaissance work to refine drill targets is required.

The maiden drilling program aimed to provide the first effective shallow test of four gold-in-soil anomalies. Elevated gold values peaking at 0.16g/t Au were intersected in transported quartz gravels at the base of Murray Basin cover, however no indicative source of this transported gold has been identified as yet.

Forward PlanPlanning for infill and step-out AC drilling at the high priority Karri, Ironbark and Beech Targets is currently underway. This Phase 2 drilling program is anticipated to further refine the multi-kilometre target areas at a drill line spacing of approximately 0.5-1.0km. It is anticipated that this drilling will commence in mid-late Q3 2019, where access, permitting and weather constraints allow.

Infill and orientation soil sampling over the Muckleford and Percydale Areas is also due to commence in the coming weeks to further assist drill targeting. Regional 2D seismic reprocessing and interpretation is also expected to be completed in the next month, which is aimed at refining structural domains of interest within the Bendigo Zone.

Full details of the forward drilling program at Muckleford will be announced once targeting work and operational requirements are finalised.

The 'Gold Undercoveri' initiative by the Victorian Government estimated a potential ~32Moz (P50) of undiscovered gold beneath Murray Basin cover in the Bendigo Zone, where Chalice holds ~60% of the total ~7,000km2 prospective area (Figure 8).

Competent Persons and Qualifying Persons StatementThe information in this announcement that relates to Exploration Results in relation to the Pyramid Hill Gold Project is based on information compiled by Dr. Kevin Frost BSc (Hons), PhD, a Competent Person, who is a Member of the Australian Institute of Geoscientists. Dr. Frost is a full-time employee of the company and has sufficient experience that is relevant to the activity being undertaken to qualify as a Competent Person as defined in the 2012 edition of the Australasian Code for Reporting of Exploration Results, Minerals Resources and Ore Reserves, and is a Qualified Person under National Instrument 43-101 – 'Standards of Disclosure for Mineral Projects'. The Qualified Person has verified the data disclosed in this release, including sampling, analytical and test data underlying the information contained in this release.  Dr. Frost consents to the inclusion in the announcement of the matters based on his information in the form and context in which it appears.

Forward-looking statements relate to future events or future performance and reflect Company management's expectations or beliefs regarding future events and include, but are not limited to, the Company's strategy, the estimation of mineral reserve and mineral resources, the realisation of mineral resource estimates, the likelihood of exploration success at the Company's projects, the prospectivity of the Company's exploration projects, the timing of future exploration activities on the Company's exploration projects, planned expenditures and budgets and the execution thereof, the timing and availability of drill results, potential sites for additional drilling, the timing and amount of estimated future production, costs of production, capital expenditures, success of mining operations, environmental risks, unanticipated reclamation expenses, title disputes or claims and limitations on insurance coverage.

Such factors may include, among others, risks related to actual results of current or planned exploration activities; changes in project parameters as plans continue to be refined; changes in exploration programmes based upon the results of exploration; future prices of mineral resources; possible variations in mineral resources or ore reserves, grade or recovery rates; accidents, labour disputes and other risks of the mining industry; delays in obtaining governmental approvals or financing or in the completion of development or construction activities; as well as those factors detailed from time to time in the Company's interim and annual financial statements, all of which are filed and available for review on SEDAR at sedar.com.