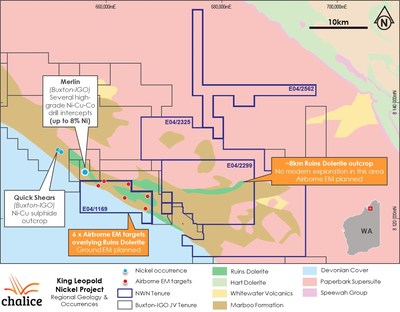 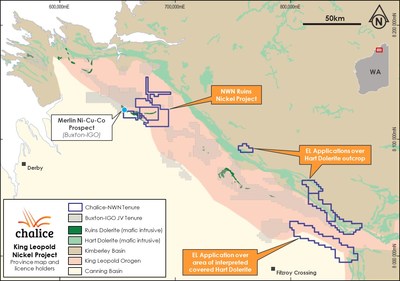 NWN holds a portfolio of nickel exploration projects, including the Ruins Project ("the Project") which is located adjacent to the recent nickel sulphide discoveries reported by Buxton Resources ("Buxton", ASX: BUX) at its Merlin Project. Buxton recently entered into two option and earn-in joint venture agreements with Independence Group ("IGO", ASX: IGO) in the region.

The acquisition will form a central part of Chalice's new ~1,800km2 district-scale King Leopold Nickel Project in the Kimberley, opening up an exciting new nickel exploration opportunity alongside the Company's high-profile gold projects in Victoria and Quebec.

Chalice's Managing Director Alex Dorsch said: "Over the past few years, we have searched globally for high-quality nickel sulphide projects with grade and scale potential, and what we see in the NWN portfolio excites us. The outlook for nickel is exceptionally strong, and there are very few advanced nickel sulphide projects out there to satisfy rapidly growing class-1 nickel demand."

"The Ruins Project is an ideal, drill-ready entry point into the King Leopold Orogen, which hosts new high-grade nickel sulphide discoveries. The presence of outcropping Ruins dolerite and co-incident EM targets along strike from Merlin immediately drew our attention, and we intend to commence drill testing these targets as soon as possible."

"The recent entry by IGO into this largely unexplored province and the substantial ramp-up of exploration activity is a sign that this area is primed for new high-grade nickel sulphide discoveries. The May-to- December field season in this region is also expected to work very favourably with ongoing exploration activities at our flagship Pyramid Hill Gold Project in the Bendigo region of Victoria."

The Ruins Project is located in the King Leopold Orogen, a province that has seen recent exploration success with several high-grade nickel-copper sulphide drill intercepts reported from Buxton's Merlin Project.

The Ruins Project is located immediately south-east of Buxton's Merlin Project and is considered to be highly prospective for nickel sulphides as well as other associated metals (Cu, Co and PGEs), having similar geology and proximity to the Merlin discovery. The Project also hosts historic tin and tungsten workings.

An airborne electromagnetic (EM) survey conducted over the south-west part of the Project (E04/1169) has identified several late-time EM anomalies co-incident with known Ruins Dolerite geology, along strike to the south-east of Buxton's Merlin Prospect in mapped Ruins Dolerite (Figure 1).

Buxton's Merlin Prospect was discovered in 2015 and exploration activities have since demonstrated that Ruins Dolerite is a favourable host rock for high-grade nickel sulphides. The Prospect includes several high-grade nickel sulphide drill intercepts (up to 8% Ni), which indicates a fertile and highly prospective mafic-ultramafic system in the area. IGO recently announced two option and earn-in Joint Venture agreements with Buxton and exploration activities are currently ramping up in the region. The JV has also substantially increased its licence holding in the frontier province (Figure 2).

An additional detailed 1,075 line-km airborne EM survey (at 150m line spacing) is scheduled to commence in late June 2019 to provide the first EM coverage along an ~8km long east-west trending outcropping body of Ruins Dolerite in adjoining tenement E04/2299 to the east. Any EM conductors identified from this survey will be followed up with reconnaissance mapping, sampling and ground EM surveying.

The Ruins Project includes >600km2 of exploration licences with multiple known zones of Ruins Dolerite outcrop. NWN's interests in the licences are outlined in the table below.

NWN has Native Title, Heritage Protection and Mineral Exploration Agreements with the Dambimangari Aboriginal Corporation and Warrwa Combined Native Title Claimant Group and has a deed of access for the Yampi Sound Training Area (covering part of E04/2299 and E04/2325 as well as all of E04/2562), all of which will apply to Chalice's exploration activities.

Under the acquisition agreement, Chalice will acquire all the outstanding shares in NWN by issuing 7.5 million fully paid ordinary Chalice shares to NWN, effectively reimbursing NWN for costs incurred to date.

The agreement also includes contingent deferred consideration whereby, subject to the following milestones being achieved at the Ruins Project, Chalice will pay to NWN:

Any future issuance of Chalice shares to NWN remains subject to shareholder approval, as required, and will be priced according to the 20-day Volume Weighted Average Price (VWAP) at point of milestone completion. All shares issued by Chalice are subject to a separate 12-month escrow period.

The transaction is conditional upon NWN finalising distribution of capital to its existing shareholders prior to settlement.

The King Leopold Nickel Project covers an area of ~1,800km2 in the west Kimberley region of Western Australia. The Project covers several known areas of Ruins and Hart Dolerite, which are both considered highly prospective for magmatic nickel sulphides as well as other related metals (Cu, Co and PGEs).

The Ruins Dolerite has been demonstrated to host high-grade nickel sulphides (drill intercept grades up to 8% Ni) after the Merlin discovery in 2015 of Buxton Resources (ASX: BUX). Buxton has since executed two option and earn-in joint venture agreements with Independence Group (ASX: IGO) and exploration activities are currently ramping up in the region. The JV has also substantially increased its licence holding in the frontier province.

The Project is a combination of several 100% owned exploration licences, 100% owned hard rock rights as well as an earn-in agreement (earning up to 85%). Field activity on the Project is anticipated to commence in late June 2019, initially focusing on areas immediately adjacent to the Merlin discovery.

The information in this announcement that relates to Exploration Results is based on information compiled by Dr. Kevin Frost BSc (Hons), PhD, a Competent Person, who is a Member of the Australian Institute of Geoscientists. Dr. Frost is a full-time employee of the company and has sufficient experience that is relevant to the activity being undertaken to qualify as a Competent Person as defined in the 2012 edition of the Australasian Code for Reporting of Exploration Results, Minerals Resources and Ore Reserves, and is a Qualified Person under National Instrument 43-101 – 'Standards of Disclosure for Mineral Projects'. The Qualified Person has verified the data disclosed in this release, including sampling, analytical and test data underlying the information contained in this release.  Dr. Frost consents to the inclusion in the announcement of the matters based on his information in the form and context in which it appears.

Forward-looking statements relate to future events or future performance and reflect Company management's expectations or beliefs regarding future events and include, but are not limited to, the Company's strategy, the estimation of mineral reserve and mineral resources, the realisation of mineral resource estimates, the likelihood of exploration success at the Company's projects including King Leopold, the prospectivity of the Company's exploration projects including King Leopold, the timing of future exploration activities on the Company's exploration projects, planned expenditures and budgets and the execution thereof, the timing and availability of drill results, potential sites for additional drilling, the timing and amount of estimated future production, costs of production, capital expenditures, success of mining operations, environmental risks, unanticipated reclamation expenses, title disputes or claims and limitations on insurance coverage.

In certain cases, forward-looking statements can be identified by the use of words such as "plans", "planning" "expects" or "does not expect", "is expected", "will", "may", "would", "potential", "budget", "scheduled", "estimates", "forecasts", "intends", "anticipates" or "does not anticipate", "believes", "occur" or "be achieved" or variations of such words and phrases or statements that certain actions, events or results may, could, would, might or will be taken, occur or be achieved or the negative of these terms or comparable terminology. By their very nature forward-looking statements involve known and unknown risks, uncertainties and other factors which may cause the actual results, performance or achievements of the Company to be materially different from any future results, performance or achievements expressed or implied by the forward-looking statements.

Such factors may include, among others, risks related to actual results of current or planned exploration activities; changes in project parameters as plans continue to be refined; changes in exploration programmes based upon the results of exploration; future prices of mineral resources; possible variations in mineral resources or ore reserves, grade or recovery rates; accidents, labour disputes and other risks of the mining industry; delays in obtaining governmental approvals or financing or in the completion of development or construction activities; as well as those factors detailed from time to time in the Company's interim and annual financial statements, all of which are filed and available for review on SEDAR at sedar.com.