/NOT FOR DISTRIBUTION TO U.S. NEWSWIRE SERVICES OR FOR RELEASE, PUBLICATION, DISTRIBUTION OR DISSEMINATION DIRECTLY, OR INDIRECTLY, IN WHOLE OR IN PART, IN OR INTO THE UNITED STATES./ 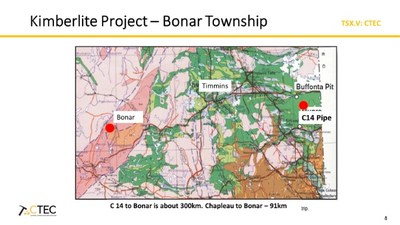 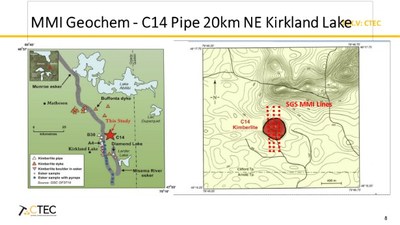 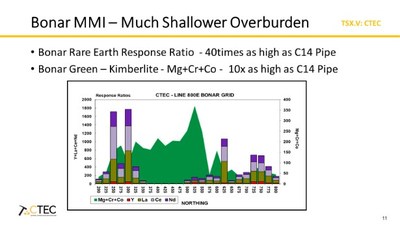 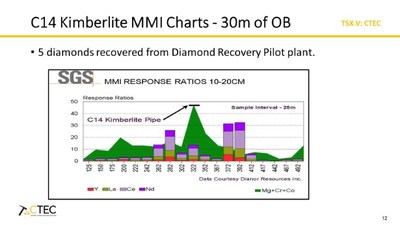 CTEC's exploration path to evaluating the 2 Mag anomalies in Bonar Township was as follows:

Charles Gryba, President and CEO stated "CTEC's potential kimberlite pipe in Bonar Township is located 45km directly north of the newly-commissioned Newmont Goldcorp Borden Lake Gold Mine. This area of the Kapuskasing uplift near Chapleau was extensively explored for carbonatites in the 1960s. Most of the carbonates were 5 to 10 kilometres in diameter with some areas grading 0.3% to 0.5% Niobium.

Claim Post Resources MMI sampled the Bonar magnetic anomalies but switched to frack sand in Manitoba and the claims lapsed. CTEC re-staked the claims in 2019 to follow up on the anomalous Cu and Zn values. The high rare earth assays on the outside perimeter of the north anomaly were noted but what was missed is that the core area of the Mag anomaly matched the Kimberlite Mg+Cr+Co response of the C14 kimberlite pipe. Graphs of the CTEC and C14 SGS data are attached; CTEC responses are much higher due to shallower overburden. When taken together; the very anomalous rare earth rim combined with the separate kimberlite core area response gives a unique overall kimberlite signature.

Deep Seismic plus gravity surveys indicate that portion of the KSZ has a 150km deep keel thus there is a good chance that if the kimberlite is diamondiferous the diamonds could still be intact. Permitting to drill a diamond drill hole to test the 12ha pipe is in progress. Most kimberlites in Canada are remote, under deep overburden or more likely under a small lake. The CTEC Bonar possible pipe has road access and all indications are that is close to surface as there are granite gneiss outcrops within 300m of the anomaly.

Mr. Charles Gryba P. Eng. has acted as the Qualified Person, as defined in NI 43-101, with respect to the disclosure has approved the scientific and technical information relating to the disclosure discussed in this news release.  Mr. Gryba - President and Director of CTEC was also the founder, President and Director of Claim Post Resources TSXV CPS from listing until 2018; thus, providing continuity on the Company's Timmins area exploration programs.

CTEC is an early-stage Canadian-based junior exploration company with property mainly within the city limits of Timmins in the Porcupine Mining District in the northeastern region of Ontario. The Company's assets are prospective for gold; a suite of base metals and now kimberlites as well. See the company website at www.centraltimmins.com.

Forward-looking information is not a guarantee of future performance and is based upon a number of estimates and assumptions of management at the date the statements are made. Furthermore, such forward-looking information involves a variety of known and unknown risks, uncertainties and other factors which may cause the actual plans, intentions, activities, results, performance or achievements of the Corporation to be materially different from any future plans, intentions, activities, results, performance or achievements expressed or implied by such forward-looking information. See "Risk Factors" in the Corporation's final prospectus dated October 4, 2018 filed on SEDAR at www.sedar.com for a discussion of these risks.

Except as required by law, the Corporation does not assume any obligation to release publicly any revisions to forward-looking information contained in this press release to reflect events or circumstances after the date hereof.

Neither the Exchange nor its Regulation Services Provider (as that term is defined in the policies of the Exchange) accepts responsibility for the adequacy or accuracy of this release.