VANCOUVER, Jan. 16, 2018 /CNW/ - Boreal Metals Corp. ("Boreal" or the "Company") (TSXV:BMX) is pleased to announce the execution of a definitive agreement with EMX Royalty Corporation ("EMX") (NYSE American: EMX,TSXV: EMX) for the acquisition of the Modum Project ("Modum" or the "Project").  The Project surrounds southern Norway's historic Skuterud Mine (also known as the Modum Mine), which was Europe's largest and highest grade producer of cobalt though the nineteenth century. 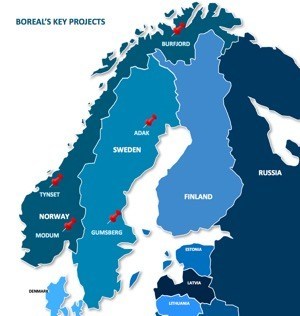 "The Modum Project includes an impressive 12,000 Ha with 12 kilometers of cobalt prospective geology, with stand-alone mining potential," stated President and CEO Karl Antonius.  "Boreal is excited about the timely acquisition of a high grade cobalt project within an emerging battery production sector in the Nordic Region."

The Nordic region is host to 26 active mines and seven smelters.  This region has excellent infrastructure including deep water ports with year round ice-free harbours, extensive roads, rail and access to skilled workforce, mining universities, and support services.

Northvolt AB (www.northvolt.com) has selected a location in Sweden to build Europe's biggest battery factory.  Northvolt CEO Peter Carlsson, a former Tesla executive, suggests that the Swedish plant will rival the scale of the U.S. electric carmaker's Gigafactory in the Nevada desert, targeting an annual cell production equivalent to 32 gigawatt-hours by 20231.  Northvolt has announced that that they plan on utilizing as much locally sourced materials as possible for battery production2.

Cobalt has many uses, but over half of the total global demand comes from the chemical sector which uses cobalt, among other applications, for metallic cathodes in rechargeable batteries3.  Specifically, lithium cobalt oxide (LiCoO2) is used in lithium ion battery cathodes.  Additionally, nickel-cadmium (NiCd) and nickel metal hydride (NiMH) batteries also use cobalt to improve the oxidation of nickel.  In addition to battery usage in mobile devices, battery technologies for electric vehicles, coupled with a worldwide shortage of ethically-sourced cobalt, have helped drive a threefold increase in the price of cobalt as worldwide demand continues to rise.

The 13,115 Ha Modum project is located approximately 75 kilometres west of Oslo, Norway.  The Modum project is accessible year-round, with robust infrastructure including road, rail, power, and skilled labour in nearby municipalities.  The Modum property position surrounds an inlier of exploration licenses held and explored by third parties that partially cover the historic Skuterud Mine (Figure 2).  Historic mine workings, prospects and trends of mineralization extend onto the Boreal property.

Modum was the primary source of the cobalt used for blue pigment in Europe during the late eighteenth and nineteenth centuries.  Historic production from the Skuterud Mine is estimated to have been in the order of 1,000,000 tons of mineralized material, with significant copper and gold.

Geology of the Modum District

The cobalt deposits in the Modum District are hosted in steeply dipping, north-south trending Mesoproterozoic sedimentary rock known locally as "fahlbands".  These rocks are intruded by mafic and ultramafic rocks and contain widespread albitization and sulfide mineralization, similar to other cobalt deposits in the region.  The most prominent of the sulfide-bearing fahlbands hosts the mineralization at Skuterud which can be tracked for 12 kilometres along strike with an average thickness of 100 to 200 meters.  Mineralization in the fahlbands occurs as disseminated sulfides, sulfide replacement zones, sulfide-rich veins developed within shear zones, and as structurally controlled lenses that occupy fold hinges.

History of the Modum District

Cobalt mineralization was discovered at the Skuterud Mine in 1772 (also known as the Modum Mine), which is the type locality of the mineral Skuterudite (CoAs3).  Production from open pits commenced in 1776, but mining transitioned underground in 1827 and continued through 1898.  It is estimated that the Skuterud Mine supplied over 80% of the world's commercially produced cobalt in the 1820's and 1830's with some byproduct copper.  Gold is also enriched in the Modum mineralization but there are no records for precious metal production4.

Limited modern exploration has taken place at Modum.  In 2013, an aeromagnetic geophysical survey (200m line spacing) covering the entire Boreal land position was commissioned by the Geological Survey of Norway (NGU).  In 2016, a 1:100,000 scale geological map was published by the NGU.  Drilling programs are currently underway on inlier claims that cover about 20% of the prospective strike length at Modum.  Much of the remaining strike length, including the extensions onto Boreal ground, has never been drill tested before.  Importantly, Gold is known to accompany the cobalt mineralization, and precious metal potential remains largely unassessed at this time.

The agreement with Boreal contains the following commercial terms:

Reference to the adjacent Skuterud mine property provides context for the Modum Project, which occurs in a similar geological setting.  However, this is not necessarily indicative that the Project hosts mineralization with similar tonnage or grade.

Boreal is a mineral exploration company focused on the discovery of Zinc, Copper, Silver, Gold and Cobalt deposits in five exceptional, historical mining project areas spanning Sweden and Norway.  The Company aims to discover new economic mineral deposits in known mining districts that have seen little or no modern exploration techniques.  The Company is led by an experienced management team and technical team, with successful track records in mineral discovery, mining development and financing.

Daniel MacNeil, P.Geo, a Qualified Person as defined by National Instrument 43-101, has read and approved all technical and scientific information related to the Modum project contained in this news release.  Mr. MacNeil is Vice President Exploration for Boreal Metals Corp.

On behalf of Boreal Metals Corporation

For further information: on Boreal please visit the Company website at www.borealmetals.com or contact Alexandra Woodyer Sherron at +1.604.922.8810 or [email protected]