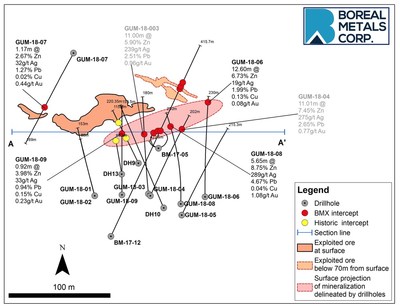 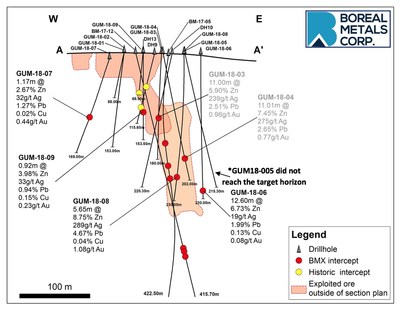 "The continued success intersecting multiple high grade precious and base metal massive sulphide mineralization in the new South Zone is very exciting for the Boreal team, as our initial thesis was always to prove that around these old relatively untested mine workings new economic discoveries could be found," stated Patricio Varas, Executive Chairman.  "These intercepts increase our confidence in the upside exploration potential throughout the + 20 km long belt land position which has not been explored using modern exploration methods."  Mr. Varas added "textures in massive sulphides intercepted previously were interpreted as remobilized massive sulphide veins however these new results contain textures that we interpret to represent primary VMS mineralization.  A down hole geophysical survey scheduled for first quarter of 2019 will help us vector toward what could potentially be new discoveries at Östra Silvberg."

These results establish continuity in the newly discovered South Zone, where the Company plans to conduct additional drilling in the spring using funds from the recent private placement (see Boreal News Release dated February 20, 2019) to continue to expand this new discovery.  Assay results for the final holes of the 2018/2019 program are summarized in the following table:

Holes GUM-18-006, GUM-18-008 and GUM-18-009 were drilled to test down-plunge and along-strike continuity of newly recognized remobilized silver-zinc-lead-gold mineralization that occurs 50 metres south of the historical workings which was intercepted in BM-17-005 in Boreal's 2017/2018 program and again in holes BM-18-003 and BM-18-004 (this program).  GUM-18-007 tested the down plunge extent of historically mined mineralization exposed at surface (Figures 1 and 2).  Drill holes GUM-18-006 through GUM-18-009 were successful in expanding the newly discovered zone (Table 1).  Drill hole GUM-18-006 cut two zones of pyrite-rich massive sulphide lenses which returned significant lead-zinc mineralization interpreted to represent the primary sulphide source of the remobilized sulphides.  The presence of high grade remobilized veins and primary volcanogenic massive sulphide mineralization significantly upgrades the potential at Östra Silvberg.

Six of the nine holes drilled at the Östra Silvberg cut significant mineralization which constitutes an expanding zone of newly recognized mineralization that remains open to the east and at depth.

The strategically situated Gumsberg project consists of six exploration licenses in the Bergslagen Mining District of southern Sweden totaling over 18,300 hectares, where multiple zones of VMS style mineralization occur.  The VMS mineralization at Gumsberg was mined from the 13th century through the early 1900s, with over 30 historic mines present on the property, most notably the Östra Silvberg Mine which was the largest silver mine in Sweden between 1250 and 1590.  Despite its long-lived production history, relatively little modern exploration has taken place on the project.  New geologic interpretations, geophysical surveys and reconnaissance drilling have led to the identification of multiple new exploration targets near the historic workings.

Daniel MacNeil, P.Geo, a Qualified Person as defined by National Instrument 43-101, has read and approved all technical and scientific information contained in this news release.  Mr. MacNeil is Vice President Exploration for Boreal Metals Corp.

Boreal is a mineral exploration company focused on the discovery of zinc, copper, silver, gold and cobalt deposits in exceptional, historical mining project areas spanning Sweden and Norway.  The Company aims to discover new economic mineral deposits in known mining districts that have seen little or no modern exploration techniques.  The Company is led by an experienced management team and technical team, with successful track records in mineral discovery, mining development and financing.

On behalf of Boreal Metals Corp.

This news release contains certain statements that may be deemed "forward‐looking statements".  Forward‐looking statements are statements that are not historical facts and are generally, but not always, identified by the words "expects", "plans", "anticipates", "believes", "intends", "estimates", "projects", "potential" and similar expressions, or that events or conditions "will", "would", "may", "could" or "should" occur.  Although Boreal believes the expectations expressed in such forward‐looking statements are based on reasonable assumptions, such statements are not guarantees of future performance, are subject to risks and uncertainties, and actual results or realities may differ materially from those in the forward‐looking statements.  Such material risks and uncertainties include, but are not limited to, Boreal's ability to raise sufficient capital to fund its obligations under its property option agreements, to maintain its mineral tenures and concessions in good standing, to explore and develop its projects, to repay its debt and for general working capital purposes; changes in economic conditions or financial markets; the ability of Boreal to obtain the necessary permits and consents required to explore, drill and develop the projects and if obtained, to obtain such permits and consents in a timely fashion relative to Boreal plans and business objectives for the projects; the general ability of Boreal to drill test its projects and find mineral resources; if any mineral resources are discovered or acquired, the Company's ability to monetize any such mineral resources; and changes in environmental and other laws or regulations that could have an impact on the Company's operations. Forward‐looking statements are based on the reasonable beliefs, estimates and opinions of Boreal management on the date the statements are made. Except as required by law, Boreal undertakes no obligation to update these forward‐looking statements in the event that management's beliefs, estimates or opinions, or other factors, should change.

For further information: on Boreal please visit the Company website at www.borealmetals.com or contact Alexandra Woodyer Sherron at +1.604.922.8810 or [email protected]