VANCOUVER, Jan. 4, 2018 /CNW/ - Boreal Metals Corp. ("Boreal" or the "Company") (TSXV:BMX) is pleased to announce the results of an Induced Polarization Geophysical Survey ("IP Geophysical Survey") at the 100% owned Burfjord Copper Project, located near Burfjord, in Northern Norway (Figure 1).  The results of the survey indicate along-strike continuity of sulphide mineralization over a three kilometer segment of prospective stratigraphy and a depth continuity in excess of 100 meters; beyond the depth limitations of the pole-dipole electrode configuration (Figure 2). 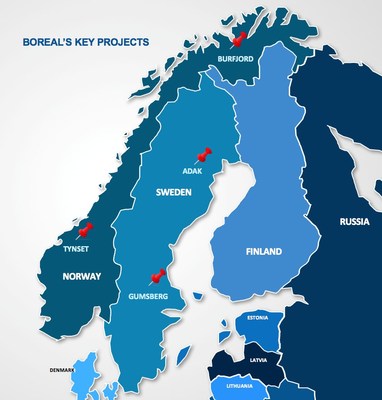 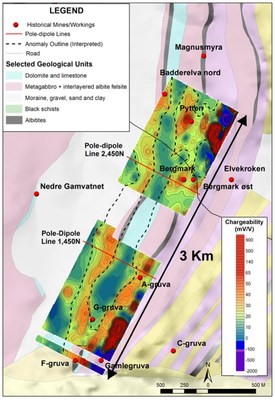 Overview of the Burfjord Project

The Burfjord project is comprised of six exploration licenses totaling 5,500 hectares in the Kåfjord copper belt near Alta, Norway.  Copper mineralization was mined in the Burfjord area during the 19th century, with over 30 historic mines and prospects developed along the flanks of a prominent 4 x 6 kilometer fold (anticline) consisting of interbedded sedimentary and volcanic rocks.  Many of the rocks in the anticline have undergone intense hydrothermal alteration and sulphide mineralization.  Mineralization occurs as both high grade Cu-Au bodies that were historically mined at high cutoff grades (>3% Cu), but Boreal has recognized significant volumes of bulk tonnage potential Cu-Au mineralization developed in stockwork vein arrays throughout the property position (Figure 3).  Veins in the area are dominated by carbonate and iron-oxide minerals (magnetite and hematite), but also contain chalcopyrite, bornite and chalcocite in addition to cobalt-rich pyrite as generally coarse-grained (often 0.5 centimeter to multi-centimeter scale) disseminations in the veins.  Discreet zones of cobalt and nickel mineralization are also seen on the property.  Only limited exploration has taken place in the modern era.  The best historical drill intercept consists of 7 meter @ 3.6% Cu was obtained from the Cedarsgruvan prospect in the northern portion of the claim block.

The mineralization at Burfjord occurs as a combination of bedding controlled and structurally controlled, discontinuous, high-grade veins (one to several meters in thickness) generally surrounded by stockwork vein and disseminated zones of previously unknown dimensions.  The variably altered and mineralized horizons form a series of discontinuous ridges defined by the stratigraphic layering (original bedding horizons likely controlled mineralizing fluid flow) where the ridge tops are dominantly comprised of relatively un-veined and unmineralized rocks.  Boreal geologists recognized that along the flanks of these ridges, where most historic mining took place on the outcropping high-grade veins, well-mineralized stockwork vein zones occur.  However, these recessive vein zones disappear under till cover and their lateral and vertical extents are not known.  Due to the style of the mineralization, it was determined that IP Geophysical "mapping" method could be utilized.

An IP and Resistivity Survey was conducted between October 5 and October 25, 2017 at Burfjord, by GeoVista AB.  Approximately, 23 line-kilometers of near surface "Werner Array" measurements were made with 30 meter electrode separation and 100 meter line spacing roughly perpendicular to and crossing two of the stockwork vein zones.  This methodology was utilized in order to track chargeable disseminated sulphide mineralization under the shallow till cover in order to determine the near-surface continuity of mineralization.  Pole-dipole measurements were carried out along two selected lines with four receiver dipoles and electrode separations from 0 to 195 meters.  The pole-dipole measurements provide a sense of depth (for this survey on the order of 100 meters) continuity of chargeable disseminated sulphide mineralization which is correlated with copper mineralization at Burfjord.

Boreal is a mineral exploration company focused on the discovery of Zinc, Copper, Silver and Gold deposits in four exceptional, historical mining project areas spanning Sweden and Norway. The Company aims to discover new economic mineral deposits in known mining districts that have seen little or no modern exploration techniques.  The Company is led by an experienced management team and technical team, with successful track records in mineral discovery, mining development and financing.

Daniel MacNeil, P.Geo, a Qualified Person as defined by National Instrument 43-101, has read and approved all technical and scientific information contained in this news release.  Mr. MacNeil is Vice President Exploration for Boreal Metals Corp.

On behalf of Boreal Metals Corporation

For further information: on Boreal please visit the Company website at www.borealmetals.com or contact Alexandra Woodyer Sherron at +1.604.218.5030 or [email protected]