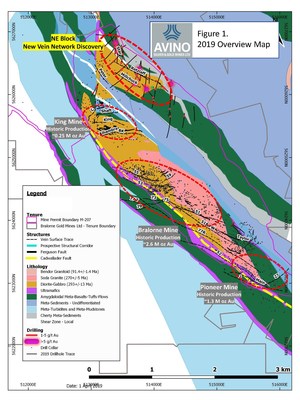 The Company is using the gross proceeds of CDN $6,000,000 raised from the Flow-Through share offering which closed on April 27, 2018 to fund the exploration work. The news release dated April 27, 2018 describing the offering may be viewed on the Avino website or under the Company's profile on SEDAR (www.sedar.com) and was also filed with the SEC on Form 6-K.

Flow-through funds for this campaign are available to be used by the end of December 2019. An estimated CDN $4.5 million has been spent to date on 24,000 meters of an expected 28,000 to 30,000 meters of diamond drilling program. The program was planned in two phases with Phase One targeting underexplored portions of known veins from Q4 2018 through Q1 2019, and Phase Two targeting new discoveries in unexplored portions of the property from Q1 2019 until the end of the year.

"We are very encouraged by the completed first pass drill testing of the NE Block target area, and we now consider the area to have high potential to host another large Bralorne-style gold vein system." said David Wolfin, Avino's President and CEO. "The drilling during the third quarter will be focused on the underexplored areas between the historic Bralorne and Pioneer mines.  We look forward to receiving these assays later in the year and to the continued success of the drill campaign."

The 2019 NE Block drilling campaign has identified a new vein array with an 1,100 metre strike extent using a wide-spaced 150 metre drill pattern.  The occurrence of gold bearing quartz veins in 77% of these holes, together with the structural and textural similarities that appear between these intercepts and the mineralization at the nearby King, Bralorne and Pioneer mines, is considered strongly supportive of Avino's exploration thesis. (see the Avino news release dated April 1, 2019).

Drilling is now underway in the historically underexplored gap between the Bralorne and Pioneer mines. Avino's newly developed conceptual targeting model has highlighted two large volumes of prospective ground possessing direct structural and lithological similarities to areas which hosted the hugely productive 77 and 27 Veins. Historically, exploration drilling in this area was oriented orthogonal to the nearby 51B FW (Footwall) and Countless Veins, leading to a drill pattern which contains large gaps in some of the most prospective ground in the district.

Following detailed geological and geotechnical logging, drill core samples are sawed in half. One half of the core is submitted to the MSA Laboratory facility in Langley, BC, Canada, and the other half is retained on-site for verification and reference. Gold is assayed by 30 gram fire assay with an AAS finish (MSA method FAS-111). Any samples exceeding 1.0 gram/tonne gold are re-assayed using a 500 gram metallic screen process followed by 30 gram fire assay (MSA method MSC-500). Multi-element analyses are also completed for each sample (MSA method ICP-130).

Avino's Bralorne Gold Mine project is under the supervision of Fred Sveinson, B.A., B.Sc., P.Eng, Senior Mining Advisor, who is a qualified person within the context of National Instrument 43-101, and Mr. Garth Kirkham, P. Geo., Principal of Kirkham Geosystems Ltd., who is an "independent qualified person", as defined by Section 1.5 of NI 43-101. Both have reviewed and approved the technical data in this news release.

About AvinoAvino is a silver and gold producer with a diversified pipeline of gold, silver and base metals properties in Mexico and Canada employing approximately 350 people. Avino produces from its wholly owned Avino and San Gonzalo Mines near Durango, Mexico, and is currently exploring and drilling at the Bralorne Gold Mine in British Columbia, Canada. The Company's gold and silver production remains unhedged. The Company's mission and strategy is to create shareholder value through its focus on profitable organic growth at the historic Avino Property near Durango, Mexico, and the strategic acquisition of mineral exploration and mining properties. We are committed to managing all business activities in an environmentally responsible and cost-effective manner, while contributing to the well-being of the communities in which we operate.

Such factors and assumptions include, among others, the effects of general economic conditions, the price of gold, silver and copper, changing foreign exchange rates and actions by government authorities, uncertainties associated with legal proceedings and negotiations and misjudgments in the course of preparing forward-looking information. In addition, there are known and unknown risk factors which could cause our actual results, performance or achievements to differ materially from any future results, performance or achievements expressed or implied by the forward-looking statements. Known risk factors include risks associated with project development; the need for additional financing; operational risks associated with mining and mineral processing; fluctuations in metal prices; title matters; uncertainties and risks related to carrying on business in foreign countries; environmental liability claims and insurance; reliance on key personnel; the potential for conflicts of interest among certain of our officers, directors or promoters with certain other projects; the absence of dividends; currency fluctuations; competition; dilution; the volatility of the our common share price and volume; tax consequences to U.S. investors; and other risks and uncertainties. Although we have attempted to identify important factors that could cause actual actions, events or results to differ materially from those described in forward-looking statements, there may be other factors that cause actions, events or results not to be as anticipated, estimated or intended. There can be no assurance that forward-looking statements will prove to be accurate, as actual results and future events could differ materially from those anticipated in such statements. Accordingly, readers should not place undue reliance on forward-looking statements. We are under no obligation to update or alter any forward-looking statements except as required under applicable securities laws.

This news release includes certain terms or performance measures commonly used in the mining industry that are not defined under International Financial Reporting Standards ("IFRS"), including silver equivalent ounces (AgEq oz) of production. Non-GAAP measures do not have any standardized meaning prescribed under IFRS and, therefore, they may not be comparable to similar measures reported by other companies. We believe that, in addition to conventional measures prepared in accordance with IFRS, certain investors use this information to evaluate our performance. The data presented is intended to provide additional information and should not be considered in isolation or as a substitute for measures of performance prepared in accordance with IFRS. Readers should also refer to our management's discussion and analysis available under our corporate profile at www.sedar.com or on our website at www.avino.com.