TORONTO, Dec. 7, 2017 /CNW/ - AuRico Metals Inc. (TSX: AMI), ("AuRico" or the "Company") is pleased to report the full assay results from the Company's 2017 exploration program on the Kemess Property. Drilling this season focused on converting inferred resource blocks to indicated and testing the northern and southern limits of the Kemess East deposit (eight holes, 11,917 metres), which is located approximately one kilometer east of the Kemess Underground deposit and 6.5 kilometers north of the Kemess mill facility and other infrastructure. The 2017 exploration also tested the northern extension of mineralization within the Kemess Offset Zone ("KOZ") (two holes, 2,006 metres) located between Kemess Underground and Kemess East. 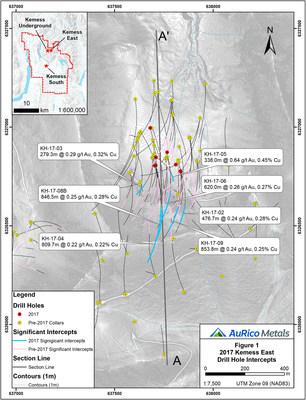 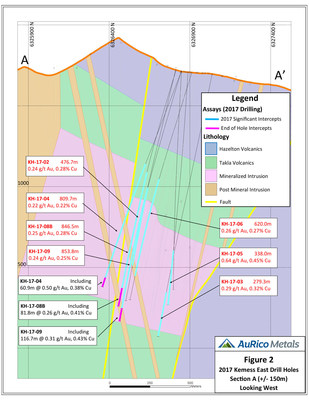 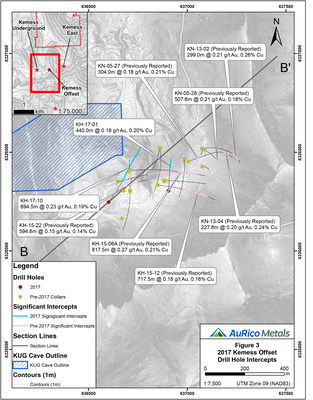 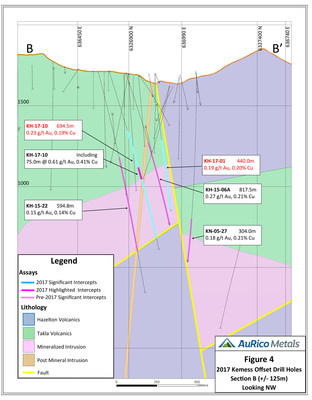 Highlights from this year's drilling at Kemess East include:

Highlights from this year's drilling in the Kemess Offset Zone include:

This year's exploration program had three key objectives: convert inferred resource blocks to indicated, expand the limits of the currently known deposit and test the northern extension of the known mineralization within the KOZ.

Commenting on today's exploration results, Chris Richter, President and CEO of AuRico Metals, stated; "We're pleased to report the outcome of this year's drilling on the Kemess property and believe we've successfully achieved our objectives. At Kemess East we expect to convert a significant amount of inferred resources to indicated resources and a number of the holes point to good potential to grow the resource to the south. At the Kemess Offset Zone, we intersected long intervals of gold and copper mineralization and this target remains open in every direction. The results from the Kemess East drill program will be incorporated into an updated Kemess East resource expected in the first quarter of 2018."

Although each hole in the 2017 program had multiple objectives they can generally be subdivided as follows: Holes KH-17-02, KH-17-04, KH-17-06, KH-17-08B and KH-17-09 were drilled in the southern Kemess East area. These holes targeted up to 175m south of the current indicated resource blocks within the inferred resource blocks. Drill holes KH-17-04, KH-17-08B and KH-17-09 bottomed in potassic strong alteration with good gold and copper mineralization that was previously modeled as lower grade. KH-17-04 was particularly intriguing as it bottomed in mineralization that was previously thought to be in barren intrusive rock.

Holes KH-17-03, KH-17-05 and KH-17-07 were drilled to test the northern area of the Kemess East deposit and to fill gaps in the current resource. KH-17-05 intersected mineralization as expected, successfully filling in a large gap in the drilling within the resource. KH-17-03 intersected the top of mineralization deeper than expected due to faulting. KH-17-07 deviated toward the area already tested by KH-17-03 and was therefore shut down prior to hitting mineralization.

Finally, holes KH-17-01 and KH-17-10 were designed to test the northern extension of mineralization within the KOZ. Both holes intersected significant mineralized intervals which extended the KOZ mineralization further to the north by 60m to 170m. KH-17-01 was shut down early due to drilling issues, however, we now have a better understanding of the mineralization, alteration and faulting within the KOZ and it remains open in all directions.

A Feasibility Study on the Kemess Underground Project was released on March 23, 2016 and proposes an underground panel caving operation with average annual production of 238,000 gold-equivalent ounces (129,000 ounces of gold and 52 million pounds of copper) for the first five years of a 12 year mine life.

A Preliminary Economic Assessment on Kemess East was released on May 29, 2017 and proposes another underground panel caving operation with average annual production of 222,000 gold-equivalent ounces (80,000 ounces of gold and 57 million pounds of copper) over a 12 year mine life.

Exploration activities at Kemess are conducted by AuRico personnel under the supervision of Wade Barnes, Project Geologist and a Qualified Person as defined by National Instrument 43-101. Wade Barnes is a PGeo registered with the Association of Professional Engineers and Geoscientists of British Columbia (APEGBC) and he has verified the data and he has also reviewed and approved this news release.

Samples were prepared at an on-site sample preparation lab. The prepared 250g samples, crushed to 80% passing 10-mesh and pulverized to 85% passing 150-mesh, were shipped in security sealed pails to ALS Minerals in North Vancouver for analysis. The 2017 samples were analyzed for a suite of 48 elements, including iron, molybdenum, and silver, using 4-acid digestion with ICP mass spectrometry and ICP atomic emission spectroscopy finish on a 0.25 gram sub-sample. Significantly mineralized samples were additionally analyzed by an extra ore grade analysis for copper and molybdenum by ICP atomic emission spectroscopy, following a 4-acid digestion on a 0.5 gram sub-sample. Gold analyses were completed by standard 30g fire assay with an atomic absorption finish. The 2017 quality control ("QC") samples (blanks, duplicates, and certified reference materials) were inserted into the sample stream at regular intervals such that 2 in 25 (8%) of samples were submitted for QC purposes. QC sample performance was monitored on a regular basis, independently of the laboratories, and failures addressed in a timely manner. All sample batches were also subjected to each laboratory's internal QC procedures, for an additional 40% QC sample volume.

AuRico Metals is a mining development and royalty company with a 100% interest in the Kemess property in British Columbia, Canada. The Kemess property hosts the feasibility-stage Kemess Underground Gold-Copper Project, the Kemess East Project, and the infrastructure pertaining to the past producing Kemess South mine. AuRico's royalty portfolio includes a 1.5% NSR royalty on the Young-Davidson Gold Mine and a 2% NSR royalty on the Fosterville Gold Mine, as well as a portfolio of additional producing and pre-production royalty assets located in North America and Australia.

All statements, other than statements of historical fact, contained or incorporated by reference in this news release including, but not limited to, any information as to the future financial or operating performance of AuRico, constitute ''forward-looking information'' or ''forward-looking statements'' within the meaning of certain securities laws, including the provisions of the Securities Act (Ontario) and are based on expectations, estimates and projections as of the date of this news release. Forward-looking statements contained in this news release include, without limitation, statements with respect to: an updated Kemess East resource to be released in the first quarter of 2018, the 2017 drill program will contribute to a much better geological model that will be the basis for the Q1 2018 resource update, the future price of gold, copper and silver, the estimation of mineral resources, costs and timing of the development of projects and new deposits, success of exploration, currency fluctuations, requirements for additional capital, government regulation of mining operations, and environmental risks. The words "anticipates", ''estimates'', ''expects'', "focus", ''forecast", "indicate", "initiative", "intend", "model", "opportunity", "option", "plans'', "potential", "projected", "prospective", "pursue", "strategy", "study" (including, without limitation, as may be qualified by "feasibility" and the results thereof), "target", "timeline" or variations of or similar such words and phrases or statements that certain actions, events or results ''may'', ''could'' or ''would'', and similar expressions identify forward-looking statements.

Forward-looking statements are necessarily based upon a number of estimates and assumptions that, while considered reasonable by AuRico as of the date of such statements, are inherently subject to significant business, economic and competitive uncertainties and contingencies. The estimates, models and assumptions of AuRico referenced, contained or incorporated by reference in this news release, which may prove to be incorrect, include, but are not limited to, the various assumptions set forth herein and in our most recently filed Annual Information Form and Management's Discussion and Analysis as well as: (1) the exchange rate between the Canadian dollar and the U.S. dollar being approximately consistent with assumed levels; (2) certain price assumptions for gold, copper and silver; (3) the results of the Kemess Underground Feasibility Study and Kemess East Preliminary Economic Assessment will be realized within a margin of error consistent with the Company's expectations; (4) the accuracy of the current mineral resource estimates of the Kemess East project; and (5) access to capital markets being consistent with the Company's current expectations.

Known and unknown factors could cause actual results to differ materially from those projected in the forward-looking statements. Such factors include, but are not limited to: the results of exploration at Kemess East and the Kemess Offset Zone and the accuracy of the mineral resource estimates at Kemess East; relations with First Nations partners and the Province of British Columbia; exploration for additional mineral resource potential; fluctuations in the currency markets; changes in the market valuations of peer group companies and the Company, and the resulting impact on market price to net asset value multiples; changes in various market variables, such as interest rates, foreign exchange rates, gold, copper or silver prices; changes in national and local government legislation, taxation, controls, policies and regulations; political or economic developments in Canada, the United States or elsewhere; business opportunities that may be presented to, or pursued by, us; employee relations; litigation against the Company; the speculative nature of mineral exploration and development including, but not limited to, the risks of obtaining necessary licenses and permits; diminishing quantities or grades of reserves; and contests over title to properties. In addition, there are risks and hazards associated with the business of mineral exploration, development and mining.  Many of these uncertainties and contingencies can directly or indirectly affect, and could cause, AuRico' actual results to differ materially from those expressed or implied in any forward-looking statements made by, or on behalf of, AuRico.