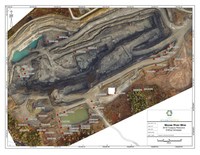 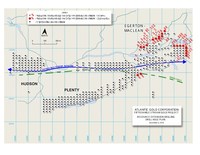 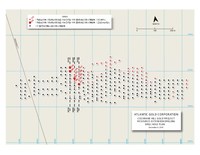 Diamond drilling at the Touquoy Gold Deposit was undertaken during October and November, mainly focused on two areas to the south of the current pit outside the current resource model where information is sparse due to a previous lack of access for drilling. To the southwest of the pit, there was a large area of historic tailings, which have since been encapsulated in engineered cells within the existing tailings management facility, making this area available for drilling.

To the southeast of the pit, removal of a drumlin (a mound of glacial till) in a clay pit has provided access to an area previously not drilled.

In both these areas the target was the argillite geological package on the south-dipping limb of the anticlinal fold that hosts the ore zone at Touquoy, with the aim of extending known mineralization. Results to date are in line with expectations, showing continuity of grade in disseminated mineralization within the argillites, with isolated high grades in centimeter-wide veins within the surrounding greywackes. Significant drill results are included in Table 1. Further assays are pending.

Several additional infill holes have been drilled to the north of the current pit, targeting argillites in the north limb of the Touquoy anticline, with the objective of increasing data density for resource estimation. Assays are still pending from these holes.

The accompanying drill plan can be viewed here: https://mma.prnewswire.com/media/793853/Atlantic_Gold_Corporation_Atlantic_Gold_Announces_Exploration_Up.pdf

The Phase 3 Resource Expansion diamond drilling program at Fifteen Mile Stream was completed at the end of February with a total of 221 holes and 24,325m drilled. Results of this program were announced in earlier news releases (see Company announcement dated March 15, 2018).

The anticline that hosts the Egerton-MacLean Zone plunges gently to the east, with the northern limb dipping moderately at 70° to the north, and the southern limb overturned and dipping steeply northwards. All drill holes are drilled to the south.

The accompanying drill plan and cross sections can be viewed here: https://mma.prnewswire.com/media/793854/Atlantic_Gold_Corporation_Atlantic_Gold_Announces_Exploration_Up.pdf

1The Mineral Resource estimate for the Fifteen Mile Stream Gold Deposits is quoted at a cut-off grade of 0.35g/t. It has an effective date of July 20, 2017 and was prepared as part of a technical report in accordance with NI 43-101 by Mr. Neil Schofield, a principal of FSSI (Australia) Pty Ltd, released on March 15, 2018 on SEDAR.

The Phase 3 Resource Expansion drilling program at Cochrane Hill was completed in January 2018, with 44 holes for 6,900m having been drilled. The Cochrane Hill deposit is a fairly predictable and continuous tabular body dipping about 70o to the north with an average true width of approximately 20-25m. Drill holes were drilled on 25m x 20m centres to test for resource extensions of this body eastwards and at depth to the northeast. Results of this program were announced in earlier news releases (See Company announcements dated March 15, 2018 and April 4, 2018).

Particularly notable from the results received from the Phase 3 drill program is a robust zone of mineralization over at least a 300m strike length (at approximately 3050E to 3350E) below the previous pit design and about 180m vertically below surface. Mineralized intervals within this zone have a combined down-hole width per drill hole averaging 30m (true width of about 22m) and a weighted average grade of 2.75g/t Au. This zone is also open at depth and to the east and has the potential to add high value ounces to further expand the current in-pit resource.

The current drilling program, designed to test this target, is on-going with a limited number of assay results being returned to date; however, mineralization typical of Cochrane Hill has been observed in most drill holes.

Significant drill results received to date are included in Table 3.

The accompanying drill plan and cross sections can be viewed here: https://mma.prnewswire.com/media/793855/Atlantic_Gold_Corporation_Atlantic_Gold_Announces_Exploration_Up.pdf

2 The Mineral Resource estimate for the Cochrane Hill Gold Deposit is quoted at a cut-off grade of 0.35g/t. It has an effective date of July 20, 2017 and was prepared as part of a technical report in accordance with NI 43-101 by Mr. Neil Schofield, a principal of FSSI (Australia) Pty Ltd, released on March 15, 2018 on SEDAR.

Atlantic's mineral properties within the Moose River Corridor, totalling approximately 171km2, are underlain by units of the Meguma Supergroup which are the preferred host to the style of mineralization being mined by the Company at the Touquoy Gold Deposit. These units also host the Beaver Dam, Fifteen Mile Stream and Cochrane Hill gold deposits, which are currently incorporated in the Phase 2 Life of Mine Expansion Pre-Feasibility Study announced in a news release dated January 29, 2018.

The "Phase 4 Corridor Regional Program" was initiated in 2018 to evaluate the under-explored and geologically prospective 45km trend which extends northeast from its Touquoy Gold Deposit at the company's Moose River Consolidated Gold Mine ("MRC"), to the Beaver Dam Gold Deposit and through to the Fifteen Mile Stream gold deposits in the northeast. This trend is underlain by the Moose River Formation, a geological unit composed of a sequence of folded argillites and greywacke which host the gold mineralization at the Touquoy, Beaver Dam and Fifteen Mile Stream deposits. The Phase 4 Corridor Regional Program will comprise a total of up to 100,000 metres of diamond drilling distributed throughout the Touquoy-Beaver Dam-Fifteen Mile Stream Corridor.

Prioritized as part of the Corridor Regional Program based on favourable interpreted geological and geophysical information and historical anomalous drill hole results, the 149 Deposit was discovered by traverses of widely-spaced diamond drilling. Encouraging initial results were followed-up and shallow mineralization was intersected over a strike length of 350m. (See News Release dated June 28, 2018).

Additional infill drilling completed identified two zones of gold mineralization: a shallow, generally higher grade "axial" zone in the core of a tight anticlinal fold and a thicker, but lower grade, "limb" zone on the over-turned limb of the anticline. The zone of mineralization was extended to over 475m in strike and is still open to the east. (See News Release dated September 19, 2018).

Deeper drilling required to extend the higher grade "axial" zone and additional shallow drilling required to follow the "limb" zone closer to surface has commenced. No assay results have been received to date; however, visual mineralization (carbonate alteration, pyrrhotite banding, quartz veining and specs of visible gold) consistent with previously reported significant mineralization has been intersected in targeted zones. Drilling will be completed before year-end and results will be incorporated in a mineral resource estimate in early 2019.

Aeromagnetic interpretation also indicates potential for similar geological settings to occur further to the east and additional reconnaissance-spaced drilling has commenced to test these zones.

Elsewhere, drilling continues within the Corridor Regional Program. Although no significant assay results have been returned from drilling completed to date, several geochemically anomalous trends associated with defined anticlinal fold structures have been delineated which will require further follow-up drilling in 2019.

The systematic drilling of the entire 50+km strike length of the Corridor will continue in 2019.

All assays reported are 50g charge fire assays of 1kg pulverized sub-sample split from -2mm crushed parent of sawn half 1m NQ core, with 1-in-10 duplicate assays of the same pulp. Certified standards prepared by a third-party laboratory and blind blanks are routinely inserted. Sample preparation and assaying is conducted at the Sudbury and Vancouver laboratories of ALS Canada Ltd, an entity having no other relationship with the Company. ALS employ a standard routine of duplicate and check assays and reference standards. Standards, blind blanks and duplicate assay results are within an acceptable range of tolerance. Core recovery is estimated for each metre and averages 96%.

Atlantic is focused on growing gold production in Nova Scotia beginning with its MRC phase one open pit gold mine which declared commercial production in March 2018, and its phase two Life of Mine Expansion which will ramp up gold production to + 200,000 ounces per year at industry lowest decile cash and all-in-sustaining-costs (as stated in the Company's news releases dated January 19, 2018 and January 29, 2018).

This release contains certain "forward looking statements" and certain "forward-looking information" as defined under applicable Canadian and U.S. securities laws. Forward-looking statements and information can generally be identified by the use of forward-looking terminology such as "may", "will", "expect", "intend", "estimate", "anticipate", "believe", "continue", "plans" or similar terminology. Forward-looking statements and information are not historical facts, are made as of the date of this press release, and include, but are not limited to, statements regarding discussions of future plans, guidance, projections, objectives, estimates and forecasts and statements as to management's expectations with respect to, among other things, the activities contemplated in this news release and the timing and receipt of requisite regulatory, and shareholder approvals in respect thereof. Forward looking information, including future oriented financial information (such as guidance) provide investors an improved ability to evaluate the underlying performance of the Company.  Forward-looking statements in this news release include, without limitation, statements related to proposed exploration and development programs, grade and tonnage of material and resource estimates. These forward looking statements involve numerous risks and uncertainties and actual results may vary. Important factors that may cause actual results to vary include without limitation, the timing and receipt of certain approvals, changes in commodity and power prices, changes in interest and currency exchange rates, risks inherent in exploration estimates and results, timing and success, inaccurate geological and metallurgical assumptions (including with respect to the size, grade and recoverability of mineral reserves and resources), changes in development or mining plans due to changes in logistical, technical or other factors, unanticipated operational difficulties (including failure of plant, equipment or processes to operate in accordance with specifications, cost escalation, unavailability of materials, equipment and third party contractors, delays in the receipt of government approvals, industrial disturbances or other job action, and unanticipated events related to health, safety and environmental matters), political risk, social unrest, and changes in general economic conditions or conditions in the financial markets. In making the forward-looking statements in this press release, the Company has applied several material assumptions, including without limitation, the assumptions that: (1) market fundamentals will result in sustained gold demand and prices; (2) the receipt of any necessary approvals and consents in connection with the development of any properties; (3) the availability of financing on suitable terms for the development, construction and continued operation of any mineral properties; and (4) sustained commodity prices such that any properties put into operation remain economically viable. Information concerning mineral reserve and mineral resource estimates also may be considered forward-looking statements, as such information constitutes a prediction of what mineralization might be found to be present if and when a project is actually developed. Certain of the risks and assumptions are described in more detail in the Company's audited financial statements and MD&A for the year ended December 31, 2017 and for the quarter ended September 30, 2018 on the Company's SEDAR profile at www.sedar.com. The actual results or performance by the Company could differ materially from those expressed in, or implied by, any forward-looking statements relating to those matters. Accordingly, no assurances can be given that any of the events anticipated by the forward-looking statements will transpire or occur, or if any of them do so, what impact they will have on the results of operations or financial condition of the Company. Except as required by law, the Company is under no obligation, and expressly disclaim any obligation, to update, alter or otherwise revise any forward-looking statement, whether written or oral, that may be made from time to time, whether as a result of new information, future events or otherwise, except as may be required under applicable securities laws.