MONTREAL, Jan. 10, 2018 /CNW Telbec/ - "The participation of people affected with Alzheimer's in the creation of this mural has transformed my understanding not only on the power of art over disease but also over life in general," declared artist John Ryan during the unveiling of the first phase presenting two panels of his provincial mural, which took place today at Centre St-Pierre, in Montreal, as part of the National Alzheimer's Awareness Campaign. 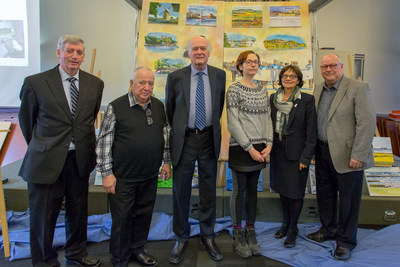 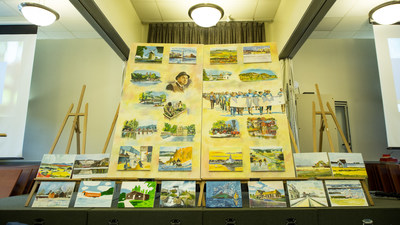 "The person-centered approach of the Alzheimer societies all across Quebec is intended to highlight individuals in their current state. Everyone affected with Alzheimer's has reserves of creativity in many areas that they can express if given the chance," noted Jean-François Lamarche, FQAS Executive Director and CEO, "and the mural project enabled us to demonstrate this in striking fashion. The resilience of those with Alzheimer's disease, supported by their caregivers, is beyond admirable."

To execute this artistic project, the Quebec Federation of Alzheimer Societies invited the 20 regional Societies to participate in painting a mural to be produced by noted artist John Ryan. During a regional tour that took place from October 31 to December 5, 2017, Mr. Ryan visited the Societies and, with his support and artistic advice, persons with Alzheimer's who have a passion for painting collaborated on the mural by painting the canvas representing their own region as part of a stimulation or art therapy activity. The result indicates that the power of the arts can triumph, at least momentarily, over the disease, their suffering or their isolation.

"Art therapy makes it possible to engage the whole person, at the social, emotional, cognitive and psychomotor level, while stimulating the abilities they retain," explained Pascale Godbout, art therapist at the Alzheimer Society of Montreal.

A magnificent mural expressing the passion of those affected with Alzheimer's

The public is invited to admire the first phase of the mural as well as other works by artist John Ryan as part of a special exhibit at the Centre St-Pierre, located at 1212 rue Panet in Montreal, until January 30. The final mural will be unveiled at a future date.

About the Quebec Federation of Alzheimer Societies (FQSA)

For more than 30 years, the FQSA has represented, maintained and defended the rights of the 141,000 Quebecers with Alzheimer's or other forms of dementia and their caregivers. It serves as provincial spokesperson for the 20 Alzheimer Societies that are present in every region of Quebec, where they offer persons affected and their caregivers, through programs, services and training, support designed to enable them to retain the best possible quality of life. Moreover, the Federation makes the general public aware of the personal and social consequences for those affected with Alzheimer's and other forms of dementia and contributes to promoting research into their causes, treatment and cure.  For information: www.alzheimerquebec.ca Facebook: @LaFederationQuebecoiseDesSocietesAlzheimer Twitter: @FqsaAlzh