TORONTO, Sept. 10, 2018 /CNW/ - Anaconda Mining Inc. ("Anaconda" or the "Company") (TSX: ANX) (OTCQX: ANXGF) is pleased to announce that it has optioned the Cape Spencer Gold Property, located east of the City of Saint John, New Brunswick ("Cape Spencer") (Exhibit A). In conjunction with this transaction, the Company has created a new wholly-owned subsidiary of Anaconda ("ExploreCo"), which will focus on early-stage gold exploration projects within Atlantic Canada. Anaconda is also contributing the Great Northern Project ("Great Northern") (Exhibit B) to ExploreCo. The Company intends to utilize ExploreCo to advance these projects and is considering strategic opportunities with ExploreCo to realize value not currently reflected in Anaconda's share price, which may include a spin out of ExploreCo to establish it as a publicly-traded company with separate management. 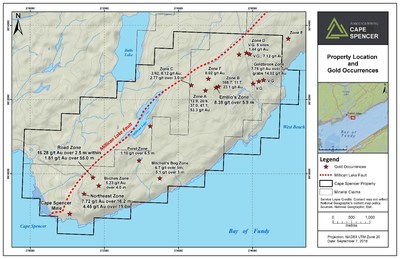 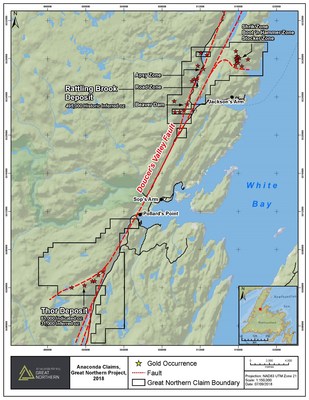 "There is an opportunity to capitalize on the resurgence in early-stage, Atlantic Canada gold exploration properties and we have assets that we believe have the potential to generate significant value. The Appalachian geological region has numerous multi-million-ounce gold deposits, with about 30% of them in Atlantic Canada, and much of the resource growth has occurred in the last decade due to increased investment. We feel that the Great Northern Project and the recently optioned Cape Spencer Gold Property have the potential to be cornerstone assets in our new venture, and the new wholly-owned subsidiary will enable the focus and priority required to generate value. Our goal is to create a company with a clear mandate to explore for and build significant district-scale Mineral Resources. Forming ExploreCo and giving it a specific focus, we expect the market can more clearly ascribe value to these exploration projects, particularly as we seek to potentially spin out the company."

Highlights of Cape Spencer include:

Drill Highlights from previous exploration work from 1982 to 2004 include:

Northeast Zone - Located 400 metres northeast of the Cape Spencer Mine. Interpreted to be continuous with the Road Zone. Highlight assays include:

Road Zone – 400-metre-long zone of gold-bearing alteration zone with an average width of 20 metres. This zone is interpreted to be the along strike continuation of the Northeast Zone. Highlight assays include:

Great Northern ProjectThe Great Northern Project is an exploration-stage property that contains a Mineral Resource estimate on the Thor Deposit and a Historic Mineral Resource estimate on the Rattling Brook Deposit. The property comprises 2 claim blocks (9,850 hectares) referred to as the Jackson's Arm Property in the north and the Viking Property in the south. The properties are located 3 kilometres north and 15 kilometres south of the community of Jackson's Arm, respectively. The area is accessible by provincial Route 420, which is connected to the Trans-Canada Highway (TCH) 75 kilometres to the south.

Highlights of the Great Northern Project include:

Pursuant to the Cape Spencer Option Agreement, for a 100% interest, ExploreCo will pay the vendor a total of $300,000 in cash and $145,000 in cash or equivalent value shares over a five-year period, subject to applicable regulatory approvals, including the Toronto Stock Exchange. ExploreCo will also complete $400,000 in exploration expenditures on Cape Spencer within the first four years. A 2% Net Smelter Return Royalty ("NSR") is payable to the vendor. One percent of the NSR is purchasable for $1,000,000 with a right of first refusal on the remaining 1% NSR.

A Table of Resources and Technical Reports*

*Mineral Resources are not Mineral Reserves and do not imply the economic viability of the resource.

This press release has been reviewed and approved by Paul McNeill, P. Geo., VP Exploration with Anaconda Mining Inc., a "Qualified Person", under National Instrument 43-101 Standard for Disclosure for Mineral Projects.

Anaconda is a TSX-listed gold mining, development, and exploration company, focused in the prospective Atlantic Canadian jurisdictions of Newfoundland, Nova Scotia and New Brunswick. The Company operates the Point Rousse and Tilt Cove Projects located in the Baie Verte Mining District in Newfoundland, comprised of the Stog'er Tight Mine, the Pine Cove open pit mine, the Argyle Mineral Resource, the fully-permitted Pine Cove Mill and tailings facility, deep water port, and approximately 9,150 hectares of prospective gold-bearing property. Anaconda is developing the Goldboro Gold Project in Nova Scotia, a high-grade Mineral Resource, which has a preliminary economic assessment and is in the feasibility stage. The Company also has a wholly owned exploration company that is solely focused on early stage exploration in Newfoundland and New Brunswick.

This press release contains "forward-looking information" within the meaning of applicable Canadian and United States securities legislation, including, but not limited to, the Company's acquisition of Cape Spencer, the evaluation of strategic alternatives with ExploreCo including the creation of a new public company. Generally, forward-looking information can be identified by the use of forward-looking terminology such as "plans", "expects", or "does not expect", "is expected", "budget", "scheduled", "estimates", "forecasts", "intends", "anticipates", or "does not anticipate", or "believes" or variations of such words and phrases or state that certain actions, events or results "may", "could", "would", "might", or "will be taken", "occur", or "be achieved". Forward-looking information is based on the opinions and estimates of management at the date the information is made, and is based on a number of assumptions and is subject to known and unknown risks, uncertainties and other factors that may cause the actual results, level of activity, performance or achievements of Anaconda to be materially different from those expressed or implied by such forward-looking information, including risks associated with the exploration, development and mining such as economic factors as they effect exploration, future commodity prices, changes in foreign exchange and interest rates, actual results of current production, development and exploration activities, government regulation, political or economic developments, environmental risks, permitting timelines, capital expenditures, operating or technical difficulties in connection with development activities, employee relations, the speculative nature of gold exploration and development, including the risks of diminishing quantities of grades of resources, contests over title to properties, and changes in project parameters as plans continue to be refined as well as those risk factors discussed in the annual information form for the fiscal year ended December 31, 2017, available on www.sedar.com. Although Anaconda has attempted to identify important factors that could cause actual results to differ materially from those contained in forward-looking information, there may be other factors that cause results not to be as anticipated, estimated or intended. There can be no assurance that such information will prove to be accurate, as actual results and future events could differ materially from those anticipated in such information. Accordingly, readers should not place undue reliance on forward-looking information. Anaconda does not undertake to update any forward-looking information, except in accordance with applicable securities laws.