TORONTO, Nov. 13, 2018 /CNW/ - Anaconda Mining Inc. ("Anaconda" or the "Company") (TSX: ANX) (OTCQX: ANXGF) is pleased to announce initial drill results from a 10,000-metre drill program that began in July 2018 (the "Drill Program") at the Goldboro Gold Project in Nova Scotia ("Goldboro"). Six drill holes (BR-18-44 to 49; 3,237 metres) successfully targeted a previously untested deeper area of the Boston Richardson Gold System ("BR Gold System") over 350 metres of strike and to depths of 525 metres (Exhibit A and B). Drilling expanded two mineralized zones an additional 200 metres along strike and expanded five other zones over 350 metres along strike. The Company observed nineteen occurrences of visible gold in the six drill holes and the character of the mineralization in those holes is consistent with results seen throughout the BR Gold System to date. The BR Gold System remains open for further expansion at depth and down plunge. 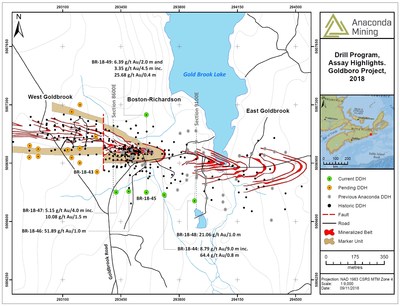 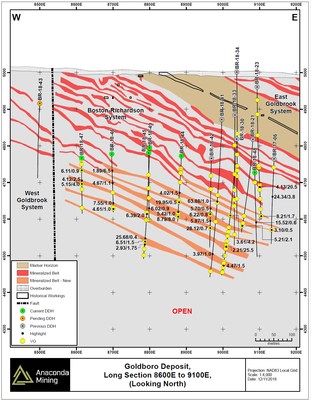 Highlights from recent drill results include:

The continuity of the BR Gold System is evident as the Company drills deeper. Below are select highlights from assays previously reported by the Company from mineralized zones discovered below the existing Mineral Resource and contiguous with mineralization intersected in this Drill Program. The continuity at depth is also illustrated in Exhibit B.

A full table of composited assays from recent drilling is presented below.

"We have demonstrated further expansion of the Goldboro Deposit, particularly in the Boston Richardson Gold System, and discovered that mineralization continues to at least to 525 metres. These results demonstrate the growth potential of the Goldboro Deposit, coming on the heels of an updated Mineral Resource estimate that highlighted a 15% increase of Measured and Indicated Resources to over 600,000 ounces, and a 30% increase of Inferred Resources to 450,000 ounces. Having successfully completed our goal of expanding the Boston Richardson Gold System, we have recently begun drilling at West Goldbrook with the aim of infill drilling critical portions of this area to upgrade Inferred Resources and to test the expansion potential to depths of 400 metres. We have completed approximately 75% of our 10,000-metre drill program which we expect to wrap up by year end. The results of this Drill Program will be used to update the Mineral Resource estimate, and will be incorporated into a feasibility study for Goldboro."

Expansion of the BR Gold System

Drill holes BR-18-30, -33, -41, and -42 intersected new zones of mineralization within the BR Gold System on Sections 9050E and 9000E as previously reported on July 5, 2018.  Diamond drill holes BR-18-44 to -49 of the current Drill Program were primarily designed to test the strike gap in drilling between the West Goldbrook Gold System and Section 9050E within the BR Gold System at total depth of 525 metres (Exhibit B).    Holes BR-18-44 to -49 were drilled along sections 8600E, 8700E, 8800E, 8900E and 9100E and contained mineralization characteristic of the BR Gold System. Based on these results and those reported for section 9050E and 9100E, Anaconda believes there is continuity within these newly outlined mineralized zones over the entire 500 metres of strike (from Section 8600E to Section 9100E).

Assays for drill hole BR-18-43 will be reported with other holes drilled in the West Goldbrook Gold System.

Reported mineralized intervals are measured from core lengths. Intervals are estimated to be approximately 75-100% of true widths of the mineralized zones, except for drill intersections below 450 metres depth in hole BR-18-30, 49, 41, 44 where the drill of the host fold structure near the bottom of the hole.  In these areas reported intervals may be as much as 50% of true width.

Anaconda Mining is a TSX-listed gold mining, development, and exploration company, focused in the prospective Atlantic Canadian jurisdictions of Newfoundland and Nova Scotia. The Company operates the Point Rousse Project located in the Baie Verte Mining District in Newfoundland, comprised of the Stog'er Tight open pit mine, the Pine Cove open pit mine, the Argyle Mineral Resource, the fully-permitted Pine Cove Mill and 7-million tonne capacity tailings facility, and approximately 9,150 hectares of prospective gold-bearing property. Anaconda is also developing the Goldboro Gold Project in Nova Scotia, a high-grade Mineral Resource, subject of a 2018 a preliminary economic assessment which demonstrates a strong project economics.

The Company also has a wholly owned exploration company that is solely focused on early stage exploration in Newfoundland and New Brunswick.

This news release contains "forward-looking information" within the meaning of applicable Canadian and United States securities legislation. Generally, forward-looking information can be identified by the use of forward-looking terminology such as "plans", "expects", or "does not expect", "is expected", "budget", "scheduled", "estimates", "forecasts", "intends", "anticipates", or "does not anticipate", or "believes" or variations of such words and phrases or state that certain actions, events or results "may", "could", "would", "might", or "will be taken", "occur", or "be achieved". Forward-looking information is based on the opinions and estimates of management at the date the information is made, and is based on a number of assumptions and is subject to known and unknown risks, uncertainties and other factors that may cause the actual results, level of activity, performance or achievements of Anaconda to be materially different from those expressed or implied by such forward-looking information, including risks associated with the exploration, development and mining such as economic factors as they effect exploration, future commodity prices, changes in foreign exchange and interest rates, actual results of current production, development and exploration activities, government regulation, political or economic developments, environmental risks, permitting timelines, capital expenditures, operating or technical difficulties in connection with development activities, employee relations, the speculative nature of gold exploration and development, including the risks of diminishing quantities of grades of resources, contests over title to properties, and changes in project parameters as plans continue to be refined as well as those risk factors discussed in the annual information form for the fiscal year ended December 31, 2017, available on www.sedar.com. Although Anaconda has attempted to identify important factors that could cause actual results to differ materially from those contained in forward-looking information, there may be other factors that cause results not to be as anticipated, estimated or intended. There can be no assurance that such information will prove to be accurate, as actual results and future events could differ materially from those anticipated in such information. Accordingly, readers should not place undue reliance on forward-looking information. Anaconda does not undertake to update any forward-looking information, except in accordance with applicable securities laws.