TORONTO, May 31, 2018 /CNW/ - Anaconda Mining Inc. ("Anaconda" or the "Company") (TSX: ANX; OTCQX: ANXGF) is pleased to announce assay results from four drill holes (1,043 metres), as part of 9,753 metres of diamond drilling completed since October 2017 (the "Drill Program") at the Company's Goldboro Gold Project in Nova Scotia ("Goldboro"). Two drill holes (BR-18-26 and -27) targeted cross section 9350E and two holes (BR-18-28 and -29) targeted cross section 9550E located in the eastern portion of the Goldboro Deposit within the East Goldbrook  Gold System ("EG Gold System") (Exhibit A, B and C). Drilling within both section 9350E and 9550E are part of an infill and expansion drill program designed to better define specific areas of the EG Gold System as part of the work outlined within the Goldboro Preliminary Economic Analysis filed on SEDAR on March 2, 2018. 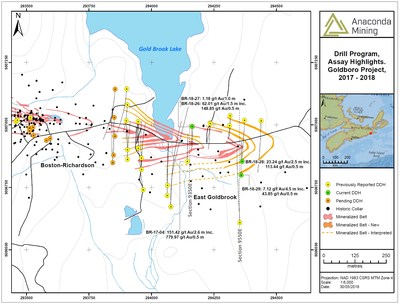 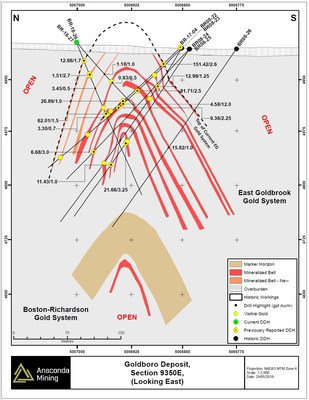 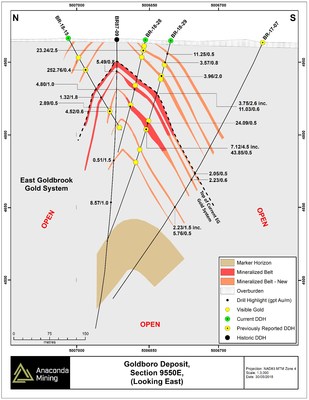 Highlight assays from the Drill Program on section 9350E and 9550E include:

Highlight assays from historic drilling on section 9350E include:

Highlight assays from previously reported and historic drilling on section 9550E include:

A full table of composited assays is presented below.

"The Drill Program continues to yield consistent, strong results in terms of grade and width. As with other sections drilled in the Goldboro Deposit, we have extended sections 9350E and 9550E down dip and down plunge. We're building off robust historical drill results and seeing that there is continuity across sections, both down and up plunge. The overall predictability of the deposit is increasing our confidence that we can efficiently grow the mineral resource. Future drilling within sections 9350E and 9550E will focus on going deeper to reach the prolific Boston-Richardson Gold System and demonstrating that Boston-Richardson continues down plunge beneath the EG Gold System."

Anaconda is currently drilling an additional 2,000 metres to follow up on the success of the Drill Program to date. The primary purpose of the additional meterage is to drill adjacent to Section 9100E from which the BR Gold System contained broad zones of high-grade mineralization associated with displacement of the existing deposit along a fault system. The Company is testing the hypothesis that it has encountered a new, fault related setting for gold mineralization within the Goldboro Deposit as has been observed in similar deposits within the Victorian Gold Fields of Australia. Anaconda is also allocating approximately 500 metres to infill certain areas of the Mineral Resource that form part of the Company's planned underground bulk sample, which is expected to occur later in 2018.

Samples analyzing greater than 0.5 g/t Au via 30 g fire assay were re-analyzed at Eastern via total pulp metallic. For the total pulp metallic analysis, the entire sample is crushed to -10mesh and pulverized to 95% -150mesh. The total sample is then weighed and screened to 150mesh. The +150mesh fraction is fire assayed for Au, and a 30 g subsample of the -150mesh fraction analyzed via fire assay. A weighted average gold grade is calculated for the final reportable gold grade. Anaconda considers total pulp metallic analysis to be more representative than 30 g fire assay in coarse gold systems such as the Goldboro deposit.